I’m on the ferry, about an hour from docking in Helsinki. We left Tallinn about five minutes before the scheduled sailing time of 18:00, and I’ve been looking for a place to plug in my phone on this boat because I was bad about conserving the battery today. I finally found a spot high up on the wall next to an elevator, so I had to sit on the floor and wait for it to charge enough to where I could unplug it and move to a more comfortable spot for blogging.

I absolutely loved Tallinn. It might be my favorite city I’ve ever been to in Europe. Partly that’s because of things I wrote about yesterday: the cobblestone streets, parks, and overall charm of the old town. But it’s also the people, and not just the people I met, but the spirit of the Estonian people, which I find so inspiring.

This is a country of about 1.2 million people who have had so little time to be independent. They were independent from 1920 to 1939, then endured Hitler and then Stalin and Khrushchev. You can tell their freedom is truly valuable to them. I got it from Ann, the tour guide yesterday, and from the young woman at the reception desk at the hotel, who is too young to remember Soviet rule, but who told me about her family’s participation in the Singing Revolution.

This morning I went to the Song Festival Grounds. The Song Festival has been held every five years since 1869. (The next one is in 2014, and I want to come back!) In a two day festival, 25,000 singers perform for an audience of 100,000. The stage is a big acoustical shell, and the audience sits on the lawn. It just boggled the imagination to think of the space filled with singers and audience, especially when you consider that they represent ten percent of the population. 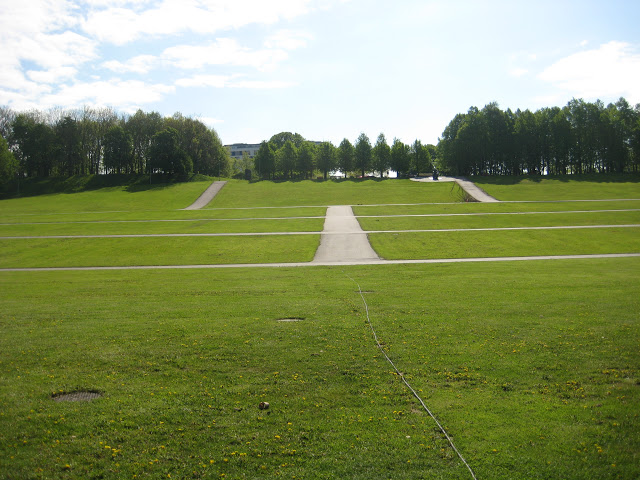 At the back of the lawn is a bench where recorded music from a past festival is played. I sat there and listened for an hour as tour groups came and went, taking pictures and buying souvenirs, but not a single person came and sat on that bench and listened to music.

But the most powerful thing about being there was thinking about the Singing Revolution. I wish I’d watched the film before I came, but I will make a point to watch it as soon as I can after I get back. In 1989, 300,000 Estonians–nearly one third of the population– gathered in that place to sing songs of freedom. Then they, the Latvians, and the Lithuanians joined hands in a human chain that stretched from the Baltic through the three countries to Vilnius. They held free elections in February 1990, and in 1991 the Estonian Parliament declared independence.

After I left the Song Festival Grounds, I walked to an adjacent park, Kadriorg Park, which is the most beautiful urban park I can remember seeing anywhere. Parts of it are almost meadows, where you can’t tell you’re in a city at all, and then there are three remarkable buildings and more architected gardens. One of the buildings is a palace built by Peter the Great for his wife or consort Catherine. 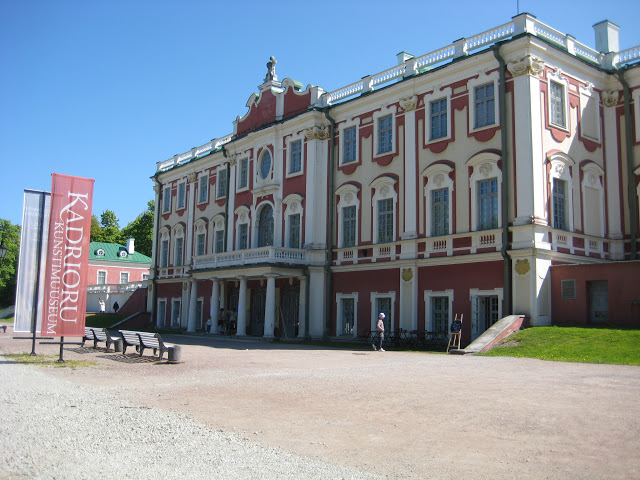 The second is Estonia’s White House (except it’s pink). Interestingly, the sum total of security on the president’s residence was two guards with rifles standing by the door. Anyone could walk right up to the building: no gate, fence, or wall blocked the entrance. 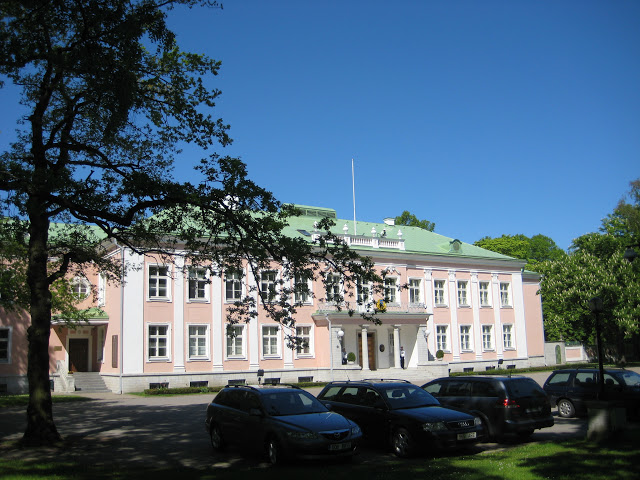 The third remarkable building in Kadriorg Park is the Kumu Museum, Estonia’s art museum. This was the only building I actually went into during my visit to Tallinn (other than hotel/restaurants/shops), and I am so glad I visited this museum. It’s devoted to work by Estonian artists from the 19th, 20th, and 21st centuries, and it provides a powerful illustration of how social realism under Soviet rule changed the nature of art. (As a footnote, when I was checking out of my hotel, the girl at the front desk, who was also there when I checked in, asked me about my trip and how I liked everything, and when I told her I went to the Kumu Museum, she said, with great pride, “Oh, our art!”) 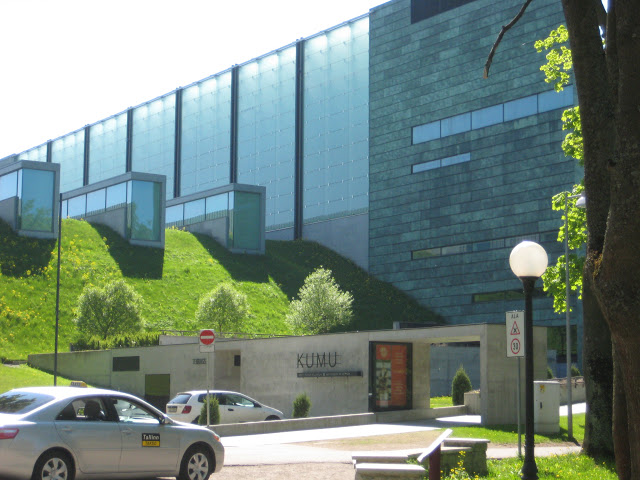 I rarely take lots of pictures of art in museums (and anyway, it’s often not allowed), but I  wanted to remember so many of the pieces in the Kumu that I took a bundle.  Here’s a small sampling (more in the album): 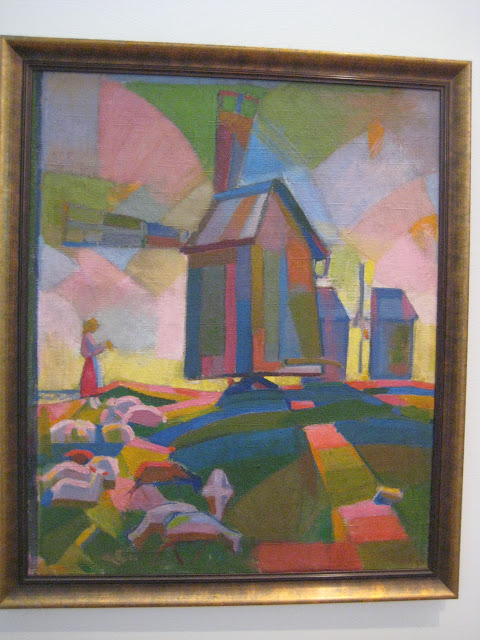 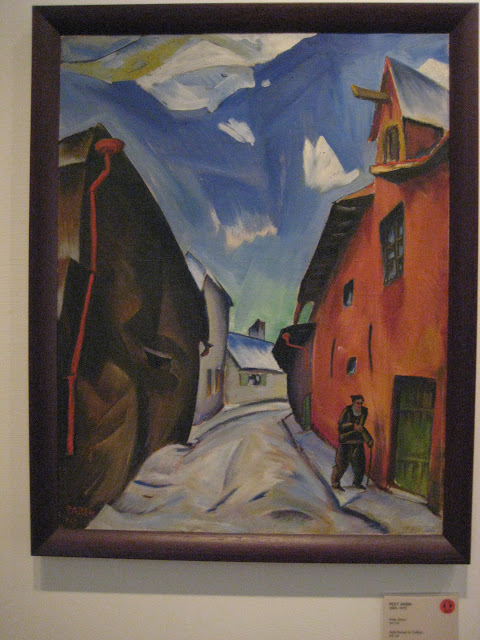 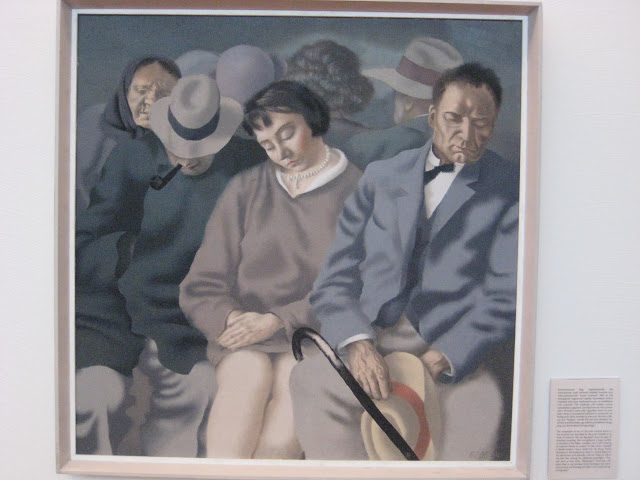 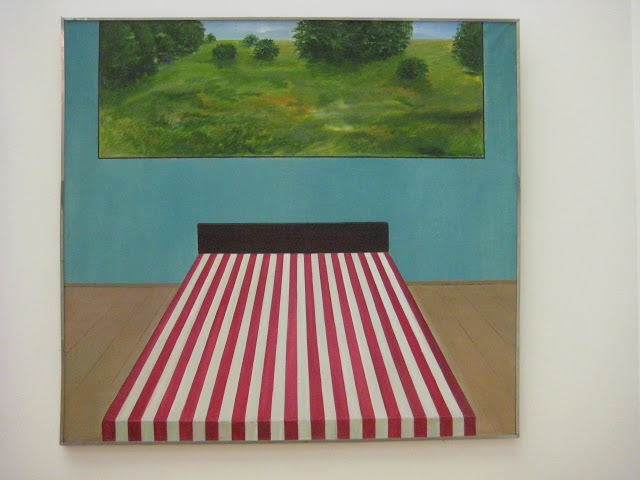 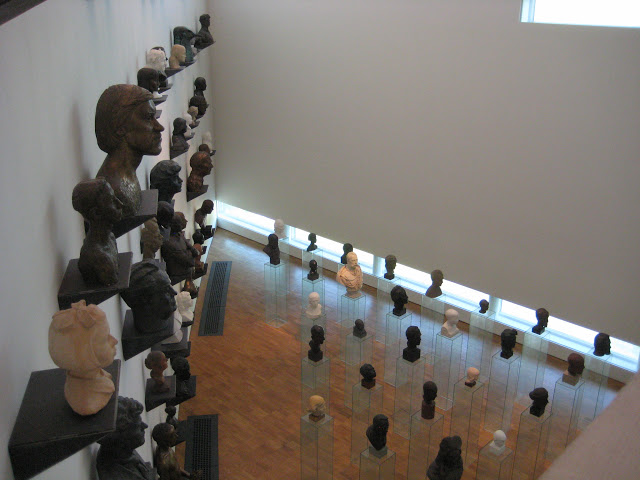 By the time I got back from my outing to the outskirts of town, it was 14:00, and I hadn’t eaten since breakfast. (The breakfast in the hotel, which was included, was terrific, a huge buffet spread with everything you can imagine in a breakfast buffet — except bacon.) So I went for lunch at a place Ann had recommended on yesterday’s tour, and I had the best meal of my trip so far. I started with an appetizer of Baltic herring which was fresh, not pickled, and then I had a dish of breaded and pan friend pumpkin with mashed potatoes and a cream sauce, and for dessert a flourless chocolate cake with tarragon ice cream and warm raspberry sauce. All for 16 euros. 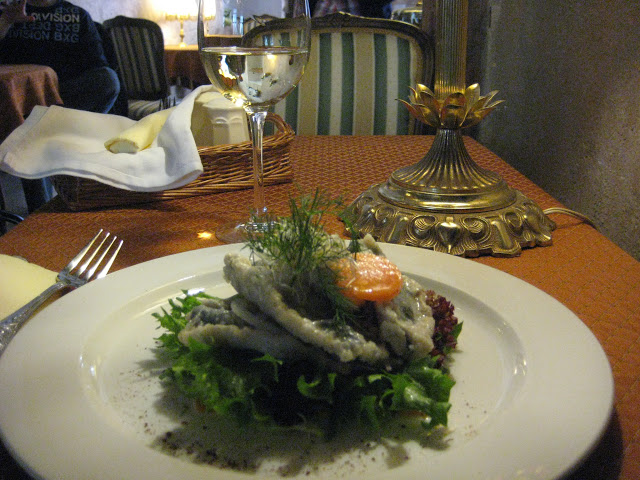 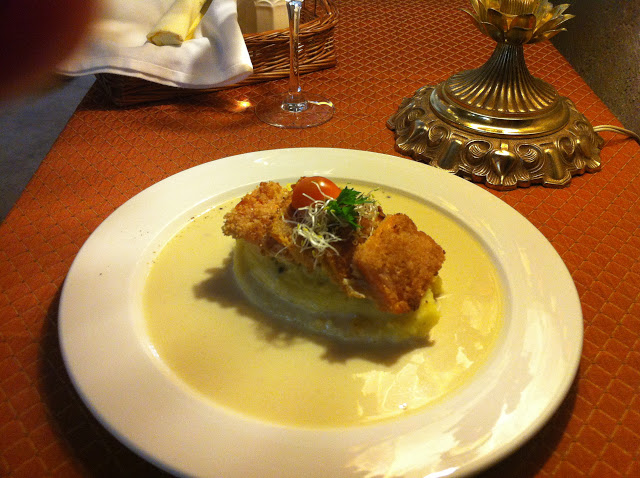 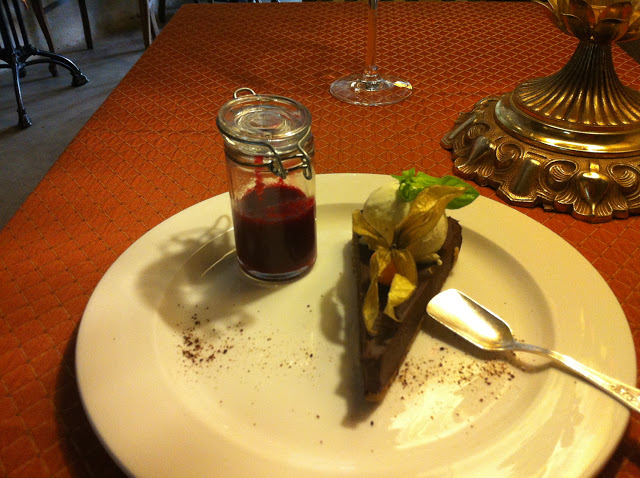 It so happens that today was the first day of a week long celebration in Tallinn called “Old Town Days,” and there were all kinds of activities in the old town all day. On the schedule was listed a concert at 16:00 by the Children’sSinging Studio of Estonian Radio on the stage in Town Hall Square. I could only stay for one song before I had to go back to the hotel to get my luggage and head to the ferry.

I can’t really imagine living in a place where the struggle for freedom is still so fresh. But being there for a couple of days was just extraordinary. I’ve really enjoyed being everywhere I’ve gone on my trip, and had moments of falling in love with every location, but I am in a serious love affair with Tallinn, and I was very sorry to have to move on. Does anyone want to come with me to the Song Festival, July 4–6, 2014?

It’s now Sunday morning. Mary met me at the ferry and we walked back to the hotel, which is very close. It is a former city jail. At the front desk they wear prison garb, the restaurant is called The Jailbird, and the rooms are converted from the original jail cells. 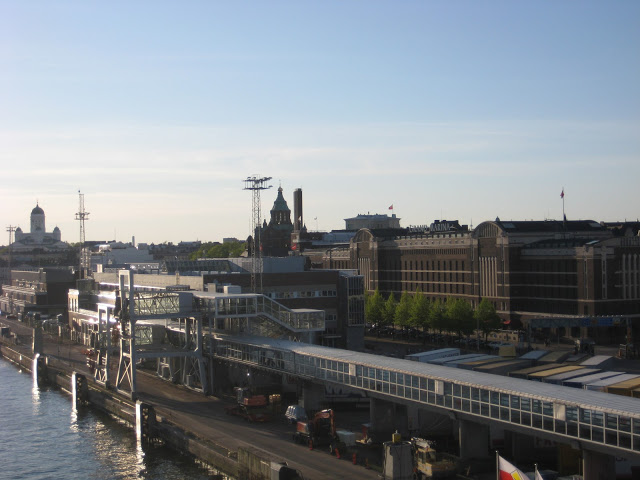 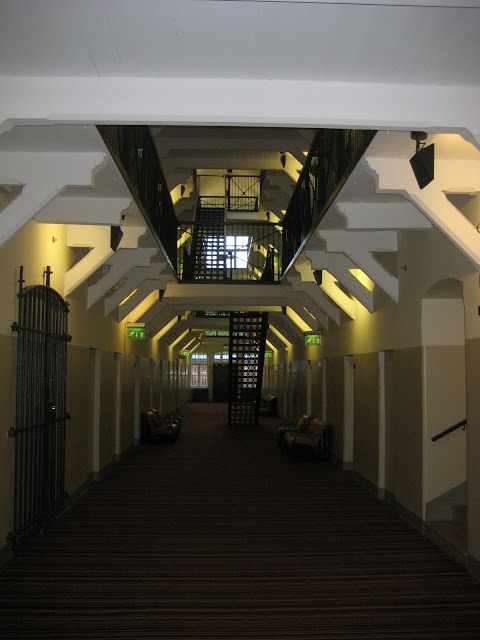 (We’re not staying in a jail cell room, though, because they are all single bed rooms. Our room is in what was the prison chapel.)

Well, it’s time for breakfast, and then we’re off to explore Helsinki.