First, I have to thank everyone who’s left a comment or a “Like” on Facebook. One of the best cures for the occasional loneliness that sets in when traveling alone is the feeling that my friends and family are a part of the experience. Keep those cards and letters coming!

I’m going to start today’s post from the end and work backwards, because I just came from the Beethoven concert by the Royal Philharmonic at the Konserthuset (Concert Hall), and I want to write about it while it’s fresh in my mind.

The Konserthuset, where the Nobel Prizes are awarded, did not feel very big or very impressive in the way it’s decorated. It has big columns that block the view for some seats in the balcony, including mine. In fact, if I sat back in my seat, all I could see was a few of the bass players. But it was easy to lean forward (I was in the front row and the railing was actually contoured to fit forearms very nicely), and then I could see the entire stage, and it felt as if I was very close to the action. 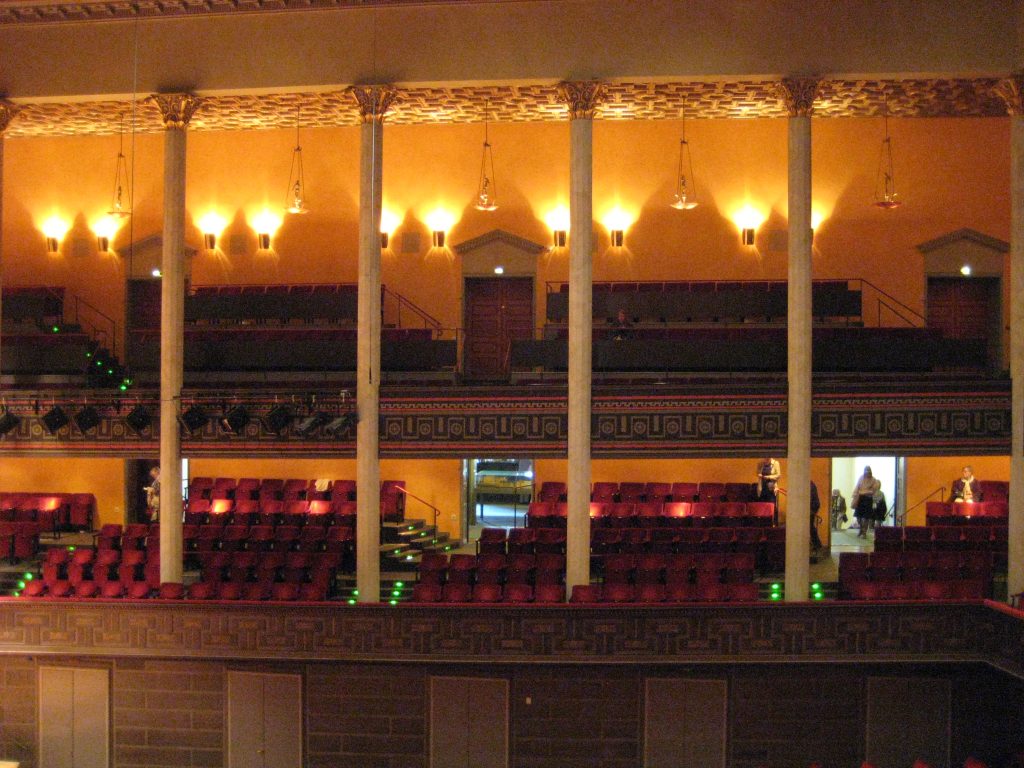 A few things were different from going to a concert in the states. First, when I got there, about 15 minutes before the concert began, some of the musicians were on stage warming up in street clothes. 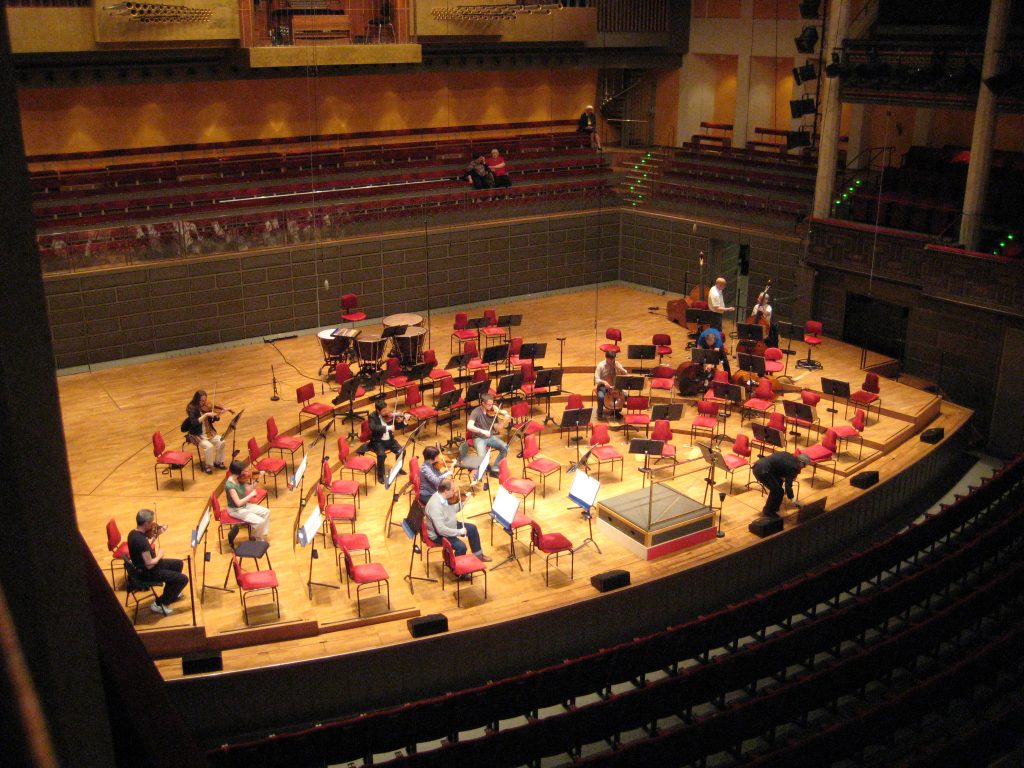 Eventually they left, and the stage was empty. The players pretty much all came on stage within the last five minutes. The men were in white tie and tails; the women in black dresses (no pants that I could see). The concertmaster came on stage with all the rest of the musicians and simply stood up to signal the oboist for A 440.

Then someone came out and made a lengthy announcement. About the only word I recognized in the speech was “Beethoven.” The audiences laughed a few times during his talk. Then at the end, he introduced Maestro Lorin Maazel. I had not picked up a program, figuring it would be in Swedish, and I didn’t remember from when I booked on line that Maazel was conducting. Anyway, the audience applauded him very warmly as he moved slowly onto the stage (he’s 82 years old). He had no music stand on the podium. He lifted the baton and launched into Beethoven’s first symphony.

I honestly thought I was beyond this kind of reaction. In fact, I don’t remember the last time this happened to me, but as they began playing, tears started streaming down my face. The Beethoven symphonies are such standard pieces, I know them well, and yet it was as if I was hearing them for the first time. Maazel used such an economy of movement, and the orchestra played with so much subtlety and refinement when that was called for, and bombast and bravura when appropriate. At times it was like listening to the most intimate chamber music. I’ve never heard such exquisite pianissimo playing, so together and so in tune. And Maazel brought out things I’d never heard before, often giving inner parts unexpected prominence. In all three symphonies he treated the scherzo movement as prologue to the finale, so there was no real pause between them. In fact, in the finale to the Eroica, the fermata between the opening fanfare and the start of the first variation was significantly longer than the pause before the movement began.

During the applause after the first symphony, when Maazel asked certain members of the orchestra to stand for individual bows, the first person he pointed to was the tympanist. I’ve never seen the tympanist called out for symphony playing before any other section or individual. But it was completely justified; he was that good.

Between the tears, I had goose bumps. This was truly the most extraordinary musical event I’ve ever witnessed. I suspect it was not just me who heard something magical tonight; the audience stood and applauded persistently, eventually evolving into rhythmic clapping.  This concert alone makes my entire vacation worthwhile. I will never forget the experience of hearing this music tonight. 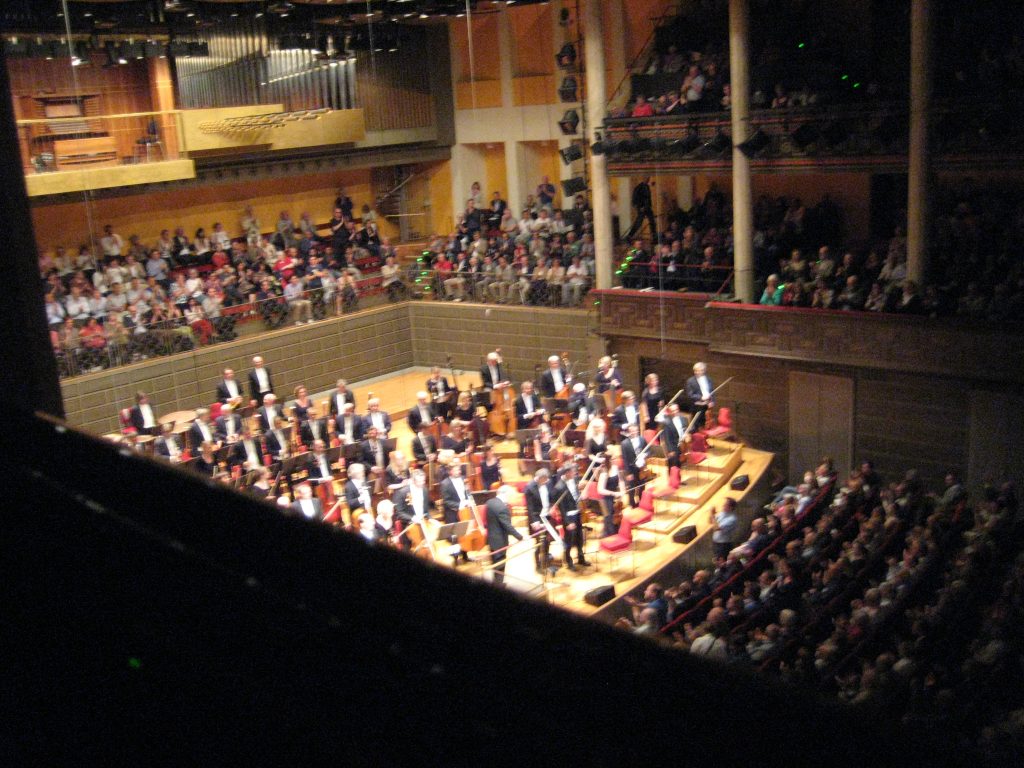 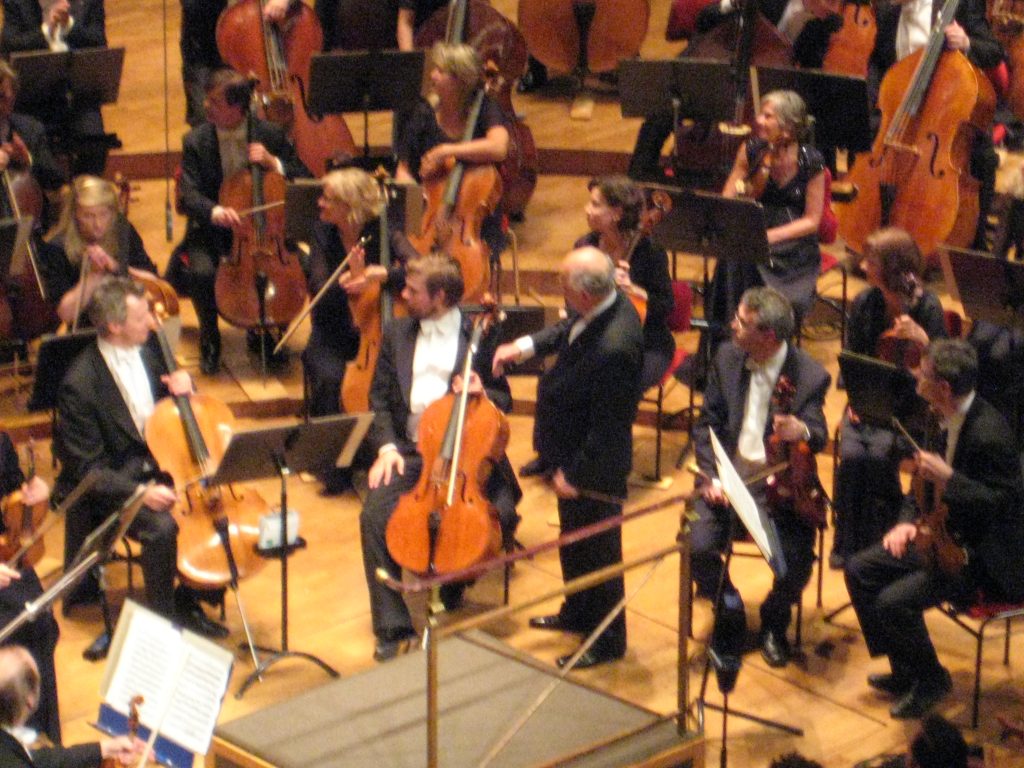 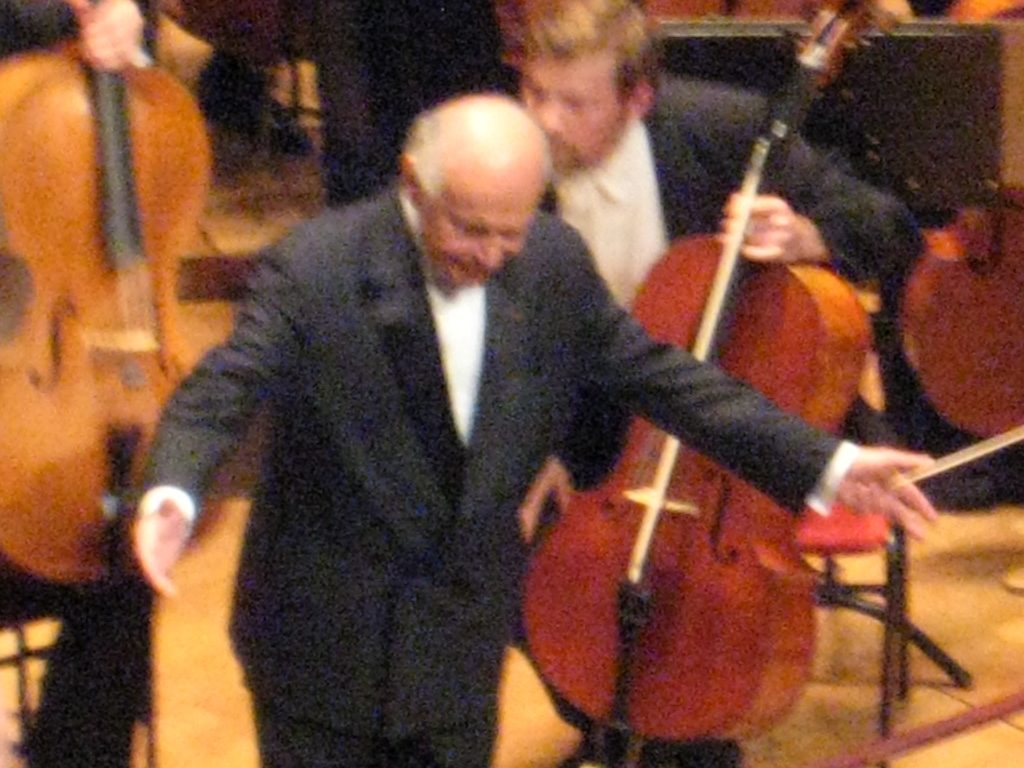 My plan for today was to head to Djurgården, rent a bike, and tool around for the better part of the day, stopping at the museums and sites I wanted to see. When I rented the bike, the guy said I could ride around for about an hour and get a good overview, and then walk to the museums, which seemed to make more sense. But the bike ride was so enjoyable, the island so pleasant, the weather so perfect, I think I would have been happy just riding around all day.

And a few other photos of the park showing how peaceful it is, a complete escape from the nearby city: 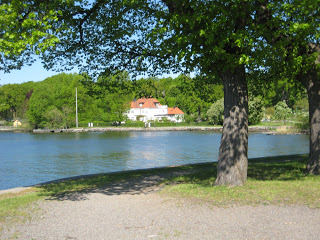 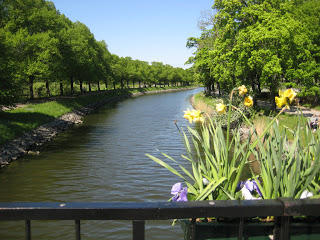 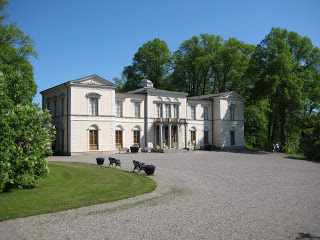 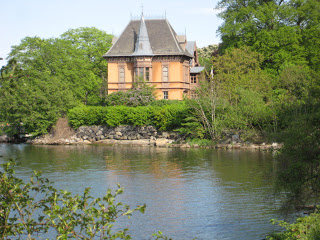 However, I returned the bike after an hour and headed to the Vasa Museum. I would venture to guess that no one who hasn’t been to Sweden has any idea what the Vasa is/was and why there’s a museum about it (I know I didn’t), but I have to say it was the best museum of this trip and one of the best non-art museums I’ve ever been to.

Here’s the backstory: in 1628, Sweden was at war with Poland, and the king commissioned a warship, the Vasa. Twenty minutes into its maiden voyage, a wind hit the sails and it sank in the harbor in front of all the local people who’d come to watch it sail off to do battle. It sat at the bottom of the harbor for 333 years, and was raised in 1961. It was amazingly well preserved, but still required (and still requires) a great deal of effort to restore it and preserve it.

The entire ship is displayed in the museum, which has five levels from which you can view it and view various exhibits. In addition, there’s a movie and a guided tour. You can learn about why it sank, how it was salvaged and restored, who was on it (including remains of some of the people whose skeletons were found), how it was originally painted in bright colors, about life in Stockholm and in Sweden in the early 17th century, and much more. It is really a remarkable story. I spent a full two hours in the museum and skimmed through several of the exhibits. 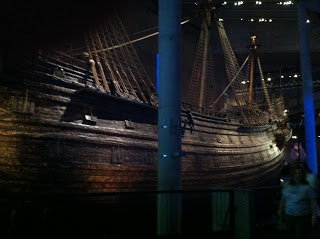 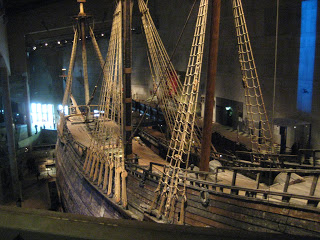 Adjacent to the Vasa Museum is the Nordiska Museet (Nordic Museum). I decided to come back to that after my visit to Skansen.

I should have known this wouldn’t be my thing. Maybe it would have been better in a few weeks after it’s fully open for the summer, but today, not yet summertime in Stockholm (even though it was warm and sunny), most of the buildings in Skansen were closed, only to be viewed from the outside, and there were very limited activities. The zoo animals and the domestic animals were on full display. (Apparently, Skansen played a significant role in saving the European bison from extinction.)

But I suspect I would have hated Skansen even if it had been peak season. Visiting buildings and talking to guides in period costumes about what it was like to live in that period is just not my favorite way to learn about history. I think this would be great for kids. I remember as a kid really enjoying Sturbridge Village in Massachusetts, which is the same idea. But I gave Skansen my best shot, spent almost two hours wandering around, and finally gave up and made my escape.

By this time I was too annoyed to go back to the Nordic Museum, so I just walked around a while and finally took the tram toward where the concert was, killed a few hours shopping around downtown, ate a sandwich I packed, and went to the concert. (I forgot to mention that yesterday and today I packed sandwiches to save the time and effort of finding a place to have lunch. Picnicking is so pleasant in Stockholm; there are so many nice spots to sit and watch people, or watch boats going by in the harbor. And restaurant dining is very expensive. Just buying a bottle of water is as much as four dollars.)

Tomorrow my ferry for Tallinn leaves at 17:45. I have a few ideas on what to do tomorrow. I could always go back to the Nordic Museum, and there are plenty of other museums covered by my Stockholm card. I’m also reconsidering Uppsala. I think I might need a day in church, and Uppsala is supposed to have one of the best in Sweden. And there’s also Millesgarden, the villa and garden of Carl Milles, supposedly Sweden’s greatest sculptor. It’s not tremendously easy to get to. I guess I’ll see what time I get going in the morning and take it from there.

Have I mentioned the public art in Stockholm? This is probably my favorite city I’ve ever been to with respect to public art. I’ve seen and photographed so many interesting sculptures. 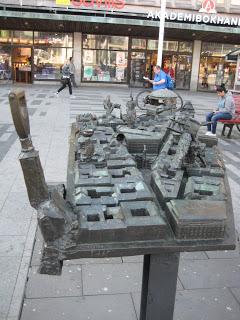 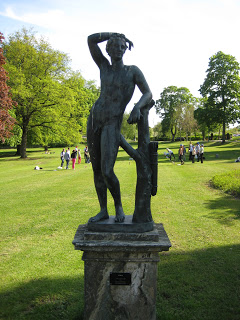 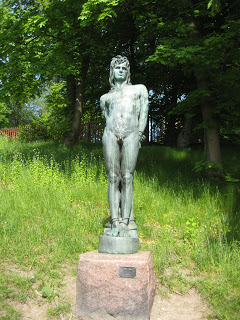 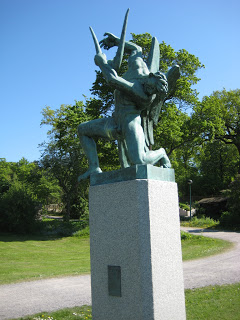 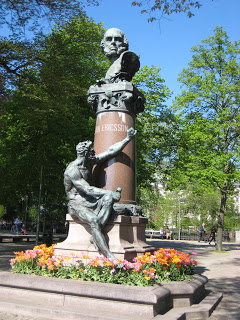 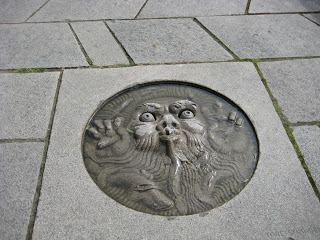 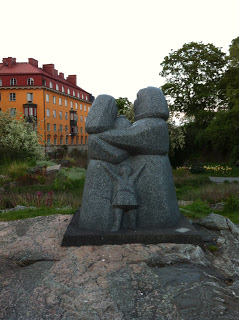 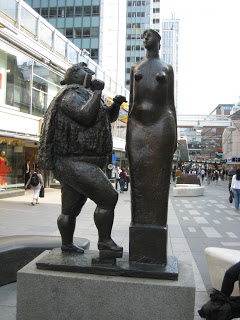 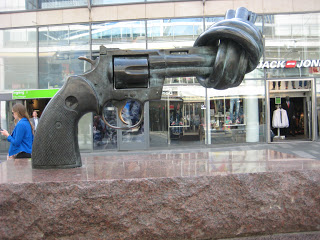 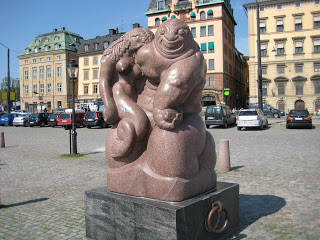 I don’t know if I’ll have wifi on the ferry. If so, I’ll post from somewhere in the Baltic. Otherwise, see you in Estonia!