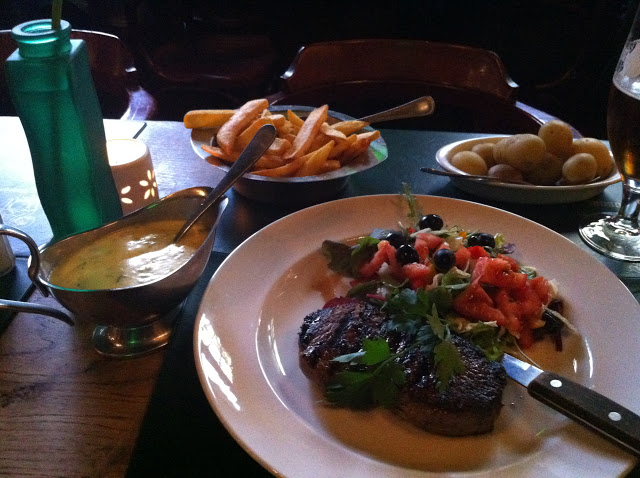 I just boarded the train to Odense, where I change for Svendborg, where I get the ferry to Ærø. Today is Ascension Day, a holiday in Denmark, and the train is packed with people getting away for the long weekend. I don’t have WiFi, so I’m going to have to post this later.

Yesterday when I left the library, it was raining. It was the kind of insidious rain that I’m used to from living in Seattle: not hard, but enough to get wet pretty quick without realizing it. It let up a few times, so I walked around for a while, hoping it would clear up for the evening bike ride, but it just didn’t happen. So I found a cozy restaurant and had a steak dinner and a Tuborg, which hit the spot. The steak came with French fries or potatoes. When I asked the waiter how the potatoes were prepared, he said he’d bring both. I also had my choice of four sauces; I went with Bernaise at the waiter’s recommendation. It also came with a salad of mixed greens, tomatoes, peppers, and black olives. It was a big meal. (The non-French-fried potatoes were new potatoes, very tender and sweet; the French fries were excellent.)

After dinner I went back to the apartment. Lars and Ivan’s son Daniel was there. They were finishing dinner, and Ivan invited me to have tea and he and I had a wide-ranging conversation about politics and travel while Lars and Daniel did some computer stuff.

This morning I had breakfast with the family, and we talked more about travel. They asked me why I was going to  Ærø , so I told them about Rick Steves, and how he has popularized traveling by Americans off the beaten path. I mentioned that he made the Cinque Terre a real destination for Americans, and they had never heard of the Cinque Terre. I also mentioned that one of my travel goals was to the Balkans; Lars said he would never think of that as a travel destination. They have some favorite vacation spots they like to go to. They also travel frequently to the USA; they have family in Georgia (Ivan’s cousin and his American partner).

It just occurred to me that for those of us who live in the New World, Europe is a place to explore a history that doesn’t exist for us, whereas for Europeans, there’s no need really to look for that past, since it’s where they live. I guess Lars and Ivan come to America to see things not found in Europe, and they travel in Europe more for leisure. It’s probably much like the way Americans go to a lake cabin in Montana, or a beach in Florida, or a ski resort in Colorado. We take different kinds of vacations at home than we do abroad. (I gave Lars and Ivan the URL for this blog, so maybe they’ll weigh in with some comments.)

We said our goodbyes and I was off to the train station. It was drizzling, but now (20 minutes out from Copenhagen) the sun is peaking out, so maybe I’ll have some good weather on Ærø.