My circadian rhythms must have been all akimbo, because I simply could not sleep for most of the night last night.  After I finished yesterday’s post, I quickly conked out. When I woke up, I was wide awake, but it was still dark.  It turned out it was 12:30. And no matter what I did, I couldn’t fall back to sleep until 5:00, and then I only slept for another hour. I am hoping I will do better tonight. I tried to avoid napping this afternoon, but couldn’t help it, and I slept for a couple of hours before dinner.  I’m still very tired, but I’ll try to recount the day’s adventures.

Breakfast in the B&B was quite nice, a selection of meats, cheeses, rolls, eggs Euro-style (soft cooked, eaten with a spoon out of the shell), cereal, and yogurt. I got there right when it opened at 7:30; Troy made it down after a few minutes, and it turns out her circadian rhythms were a lot like mine: she hadn’t slept much either. After breakfast she decided to go back upstairs to try to sleep some more, so I set out on my own, and we made plans to meet for the Ljubljana Free Tour at 11:00.  I explored a charming part of town with a lot of museums and other interesting buildings, and then headed into Tivoli Park. Finally I made my way to Prešeren Square, where Troy was waiting, and the tour began.

And now, gentle reader, I can proceed no longer in my Ljubljana journal without talking about Plečnik.

I really should have introduced Plečnik in my Balkan Art post, but I somehow managed to overlook him. It is said that Plečnik is to Ljubljana what Antoni Gaudí is to Barcelona.

From libraries, office buildings, cemeteries, and stadiums to landscaping, riverside embankments, and market halls, Plečnik left his mark everywhere. While he may not yet register very high on the international Richter scale of important architects, the Slovenes’ pride in this man’s work is understandable.

Jože Plečnik was born in Ljubljana in 1872.  He studied architecture in Vienna with Otto Wagner, who was one of the main members of the Vienna Secession movement. Plečnik’s early work was in the Art Nouveau style, but in 1921 he was chosen by the president of Czechoslovakia as chief architect for the renovation of Prague Castle, and there he perfected his style, a personal interpretation of Vienna Secession architecture with classical touches such as columns and pyramids that is austere yet playful.

Plečnik returned to Ljubljana in the 1920s and remained here until he died in 1957. After the Communists came to power following World War II, Plečnik fell out of favor and into oblivion. This changed in 1986, when the Pompidou Center in Paris held an exhibition about Plečnik, and today he is celebrated as singularly responsible for having created the Ljubljana of today.

We heard all about Plečnik on the tour and saw a good sampling of his work, but there is so much more, and I wish there were time to see it all. I really became enamored of his work today.

Of course there is more than just Plečnik here. There’s a lot of Baroque architecture, and Socialist Realism is also prevalent. I’ve included a smattering of the highlights here, and there’s more in Picasa. Unfortunately, I don’t remember what every building was, and not everything I took a picture of was a landmark.

This church is better known as the Serbian Orthodox Church. Photographs weren’t allowed inside, but I found some photos online. 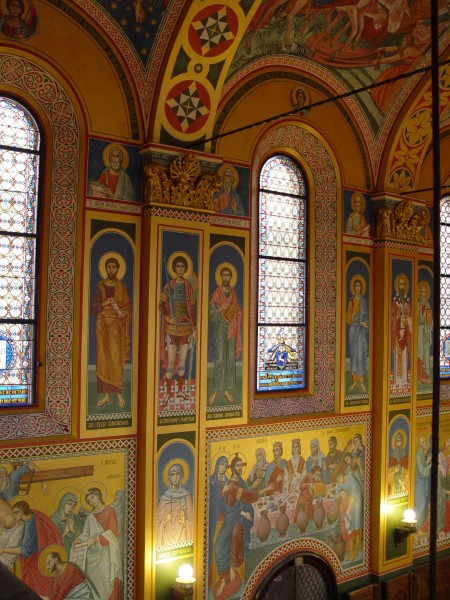 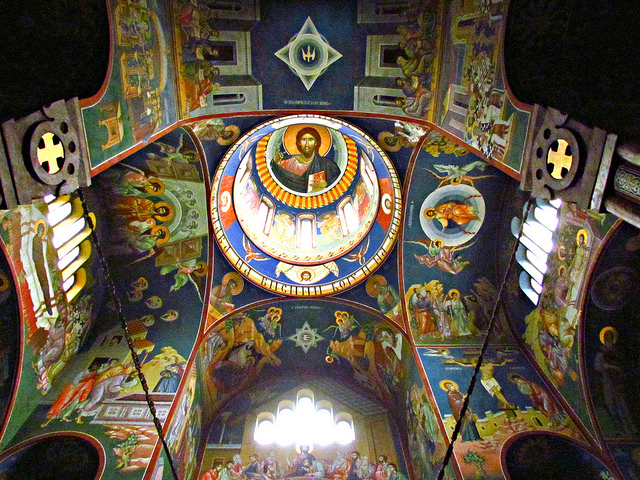 I was struck by the beauty of the space. I don’t think I’ve ever been in an Orthodox church before. The brilliant colors of the iconography covered every wall plus the ceiling. There are no pews: worshipers stand.

After the tour we were hungry, and we shared a delicious salad and pizza at Foculus Pizzeria. Rick Steves says it’s the best pizza in the city, and while it’s the only pizza we’ve eaten here, we are willing to concede the point. 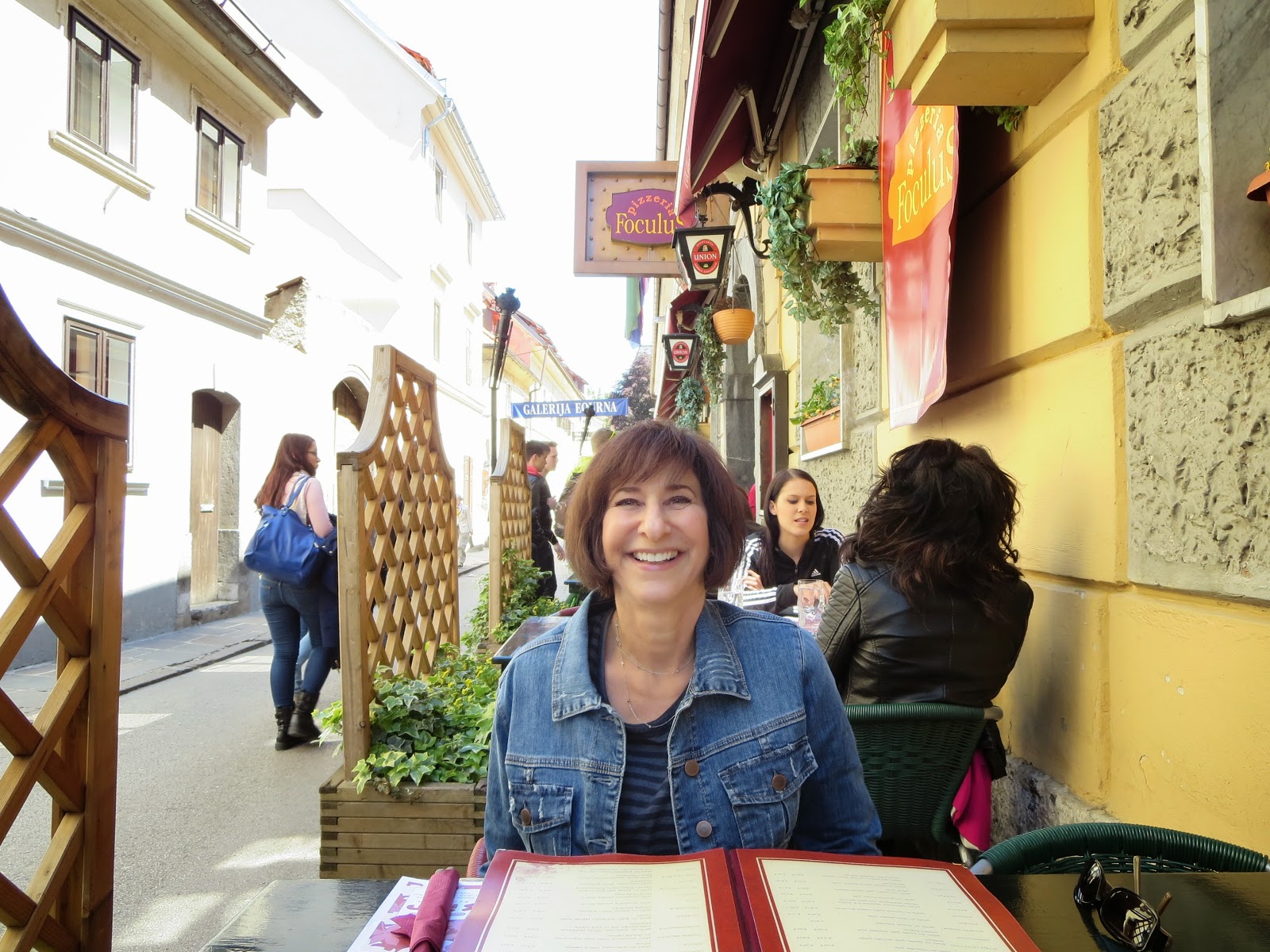 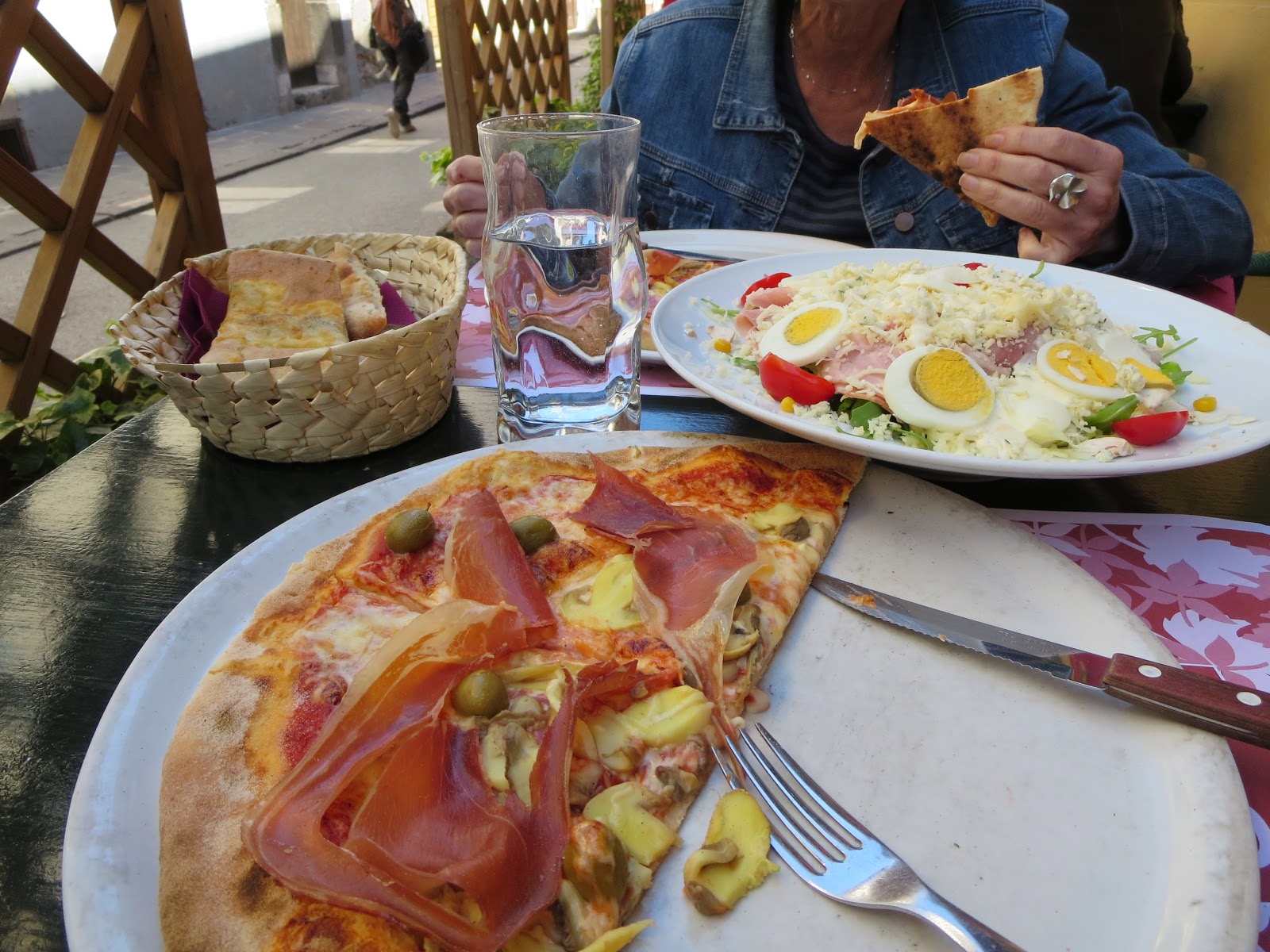 Then we went back to the library to see the interior, which I thought was stunning. 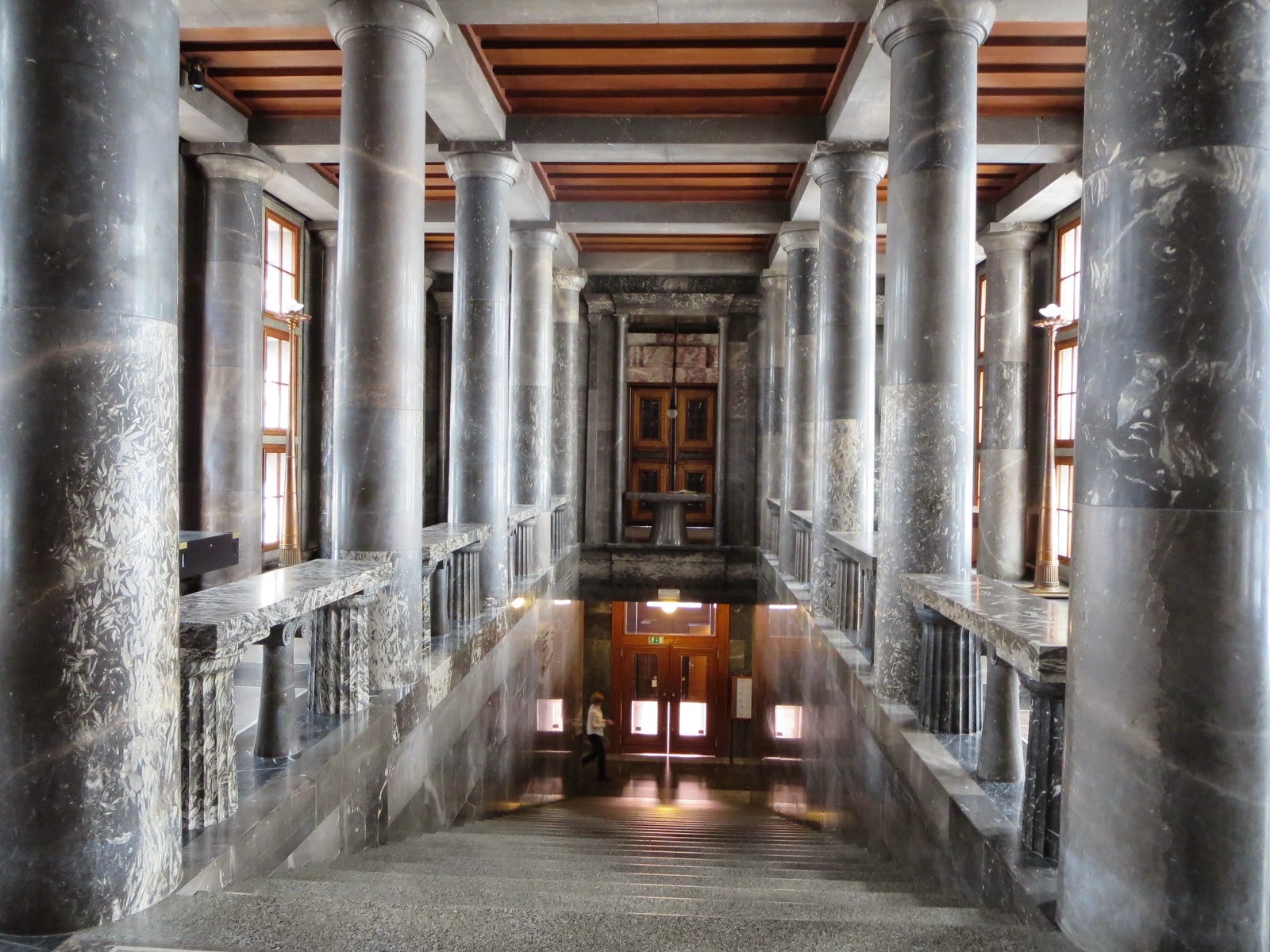 From there we walked back along the river and rode the funicular up the the castle. The views were great, but the castle was nothing to write home about. From inside it doesn’t come close to offering a sense of history. (Oops, so much for not writing home about it.) 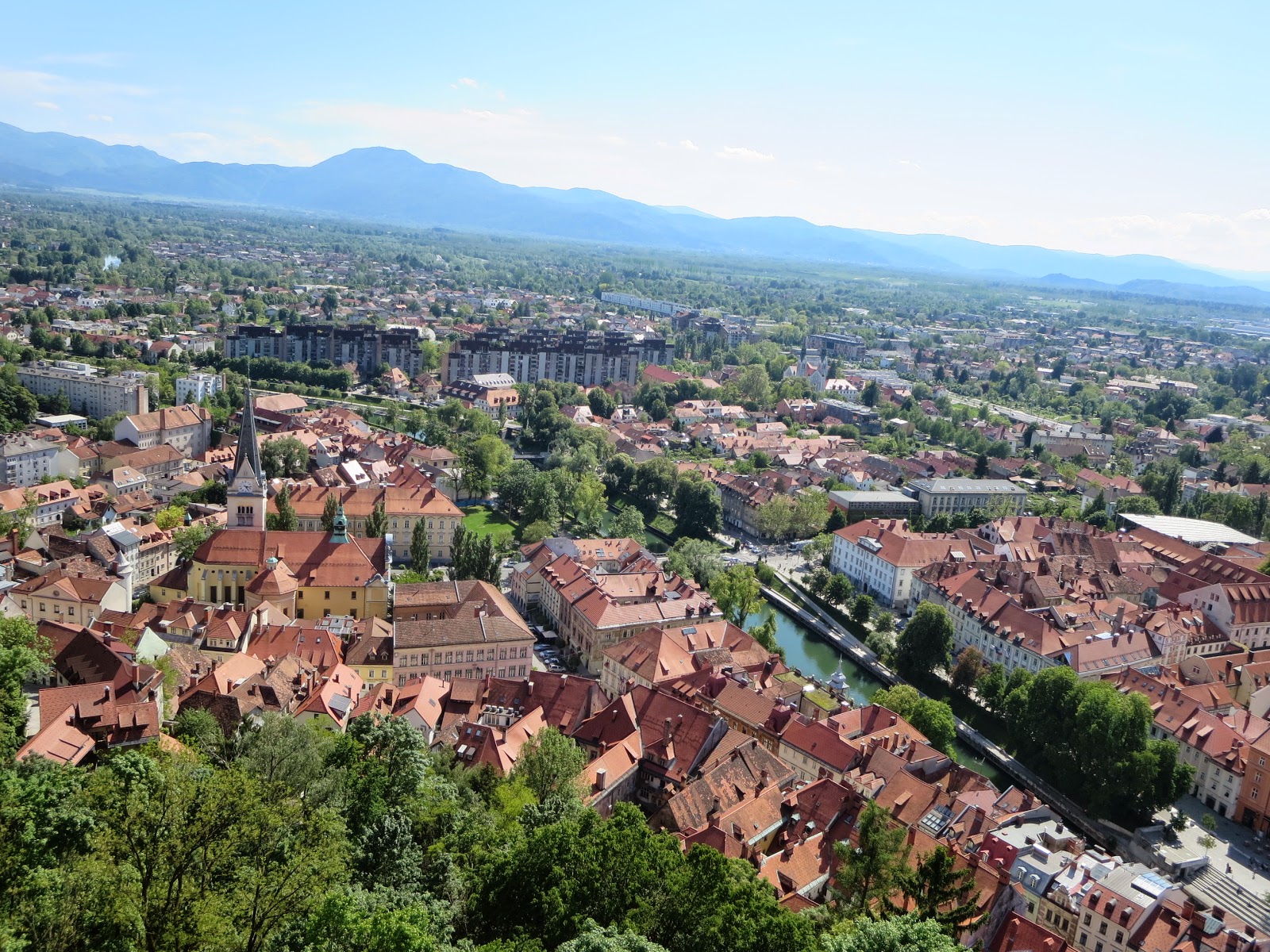 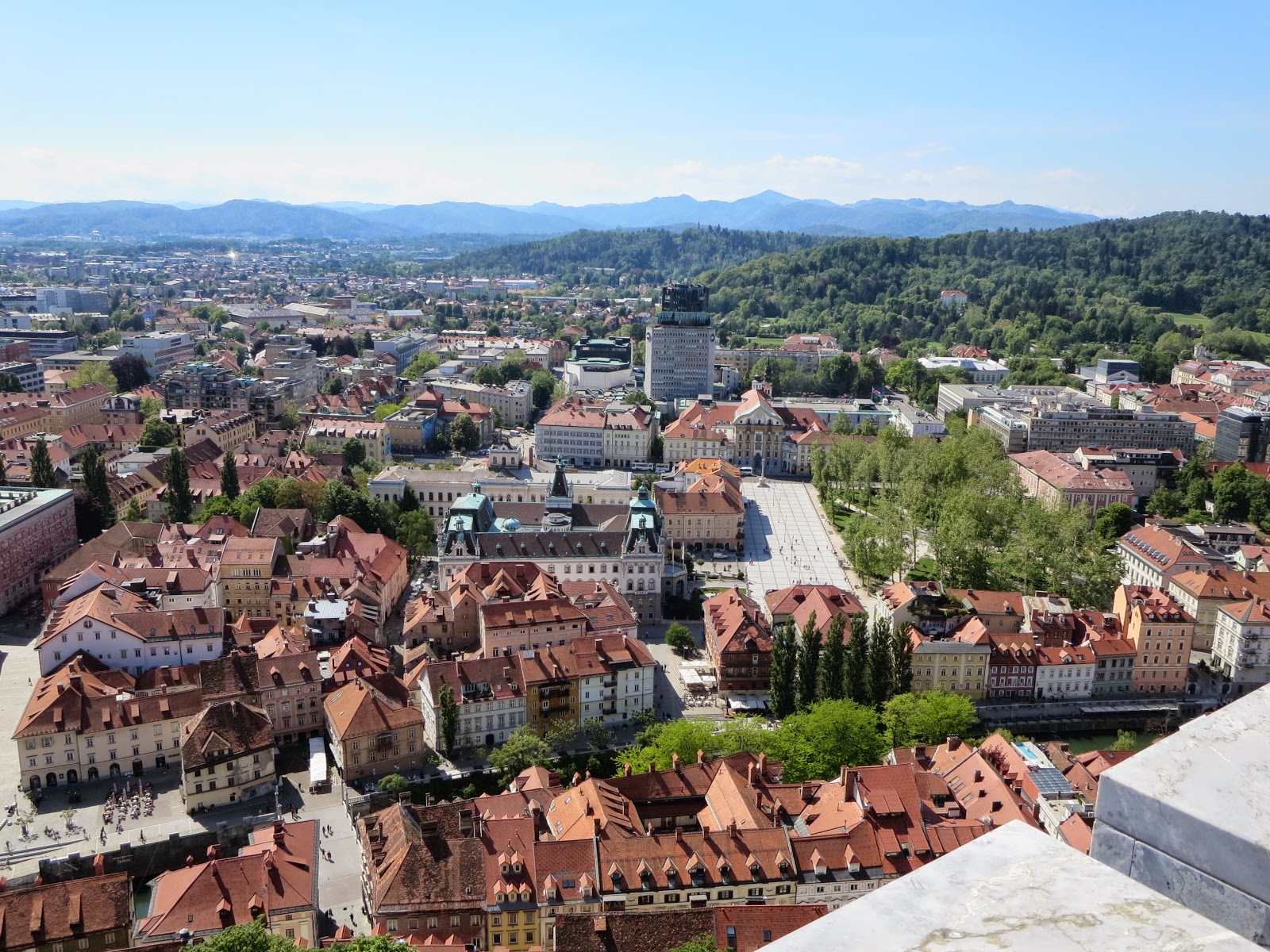 Passing through the market, I bought some locally-grown strawberries which Troy and I agreed were the best strawberries we’d ever eaten. And never too exhausted to pass up ice cream, we stopped for a treat before heading back to the B&B for a nap. Afterwards, neither of us was very hungry, but we thought we should get something. We decided to go up into “The Skyscraper,” Ljubljana’s first skyscraper, where there is a bar, but they only had dessert items, so we had a drink and enjoyed the view before heading back into the old town. We settled for Tokyo Piknik because (1) they had smaller dinner items, and (2) they had outdoor seating with heaters, and it was getting chilly. I had Pad Thai that was actually decent. Then we walked back to Prešeren Square and enjoyed a Prekmurska gibanica, the traditional Slovenian dessert I wrote about.

So that was the day. I started this right after I got back to my room, but it’s now 06:30 on Tuesday. I’ve been up since 03:30, so still not back to a good sleep rhythm. After breakfast we’re off to Bled and Bohinj.