When we were driving via a twisty back road up and over the mountains to Bohinj this morning, Troy said she imagined I would describe the view in eloquent, dignified, refined language. Whereas she would just say “It was a fucking gorgeous drive.”

She’s right. In her description and in my more eloquent, thousand-word version: 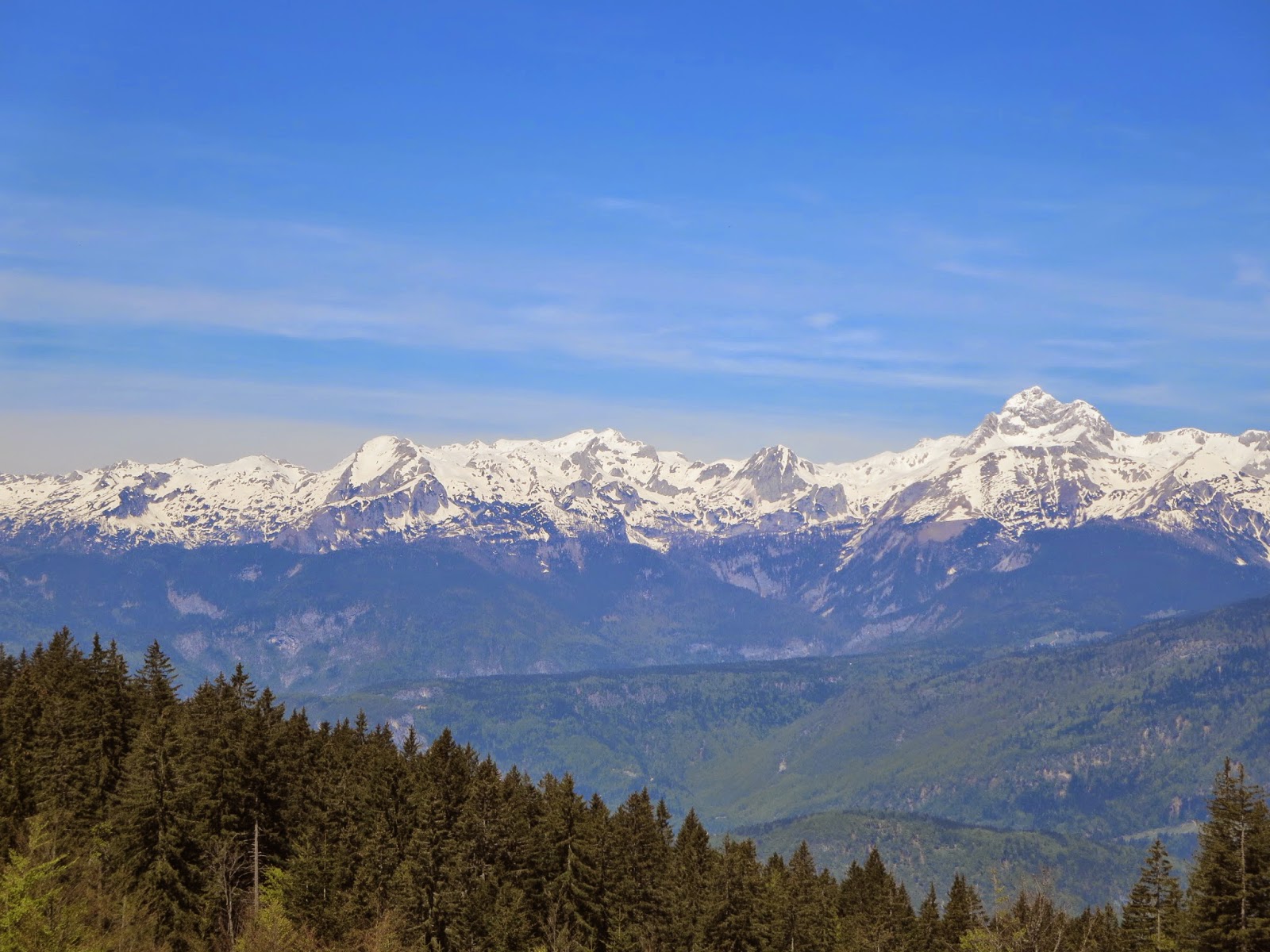 We drove out of Ljubljana toward the town of Škofja Loka, which has been around since 1274 and is considered to be one of the best-preserved medieval towns in Slovenia. Most of the existing buildings date from the sixteenth century. 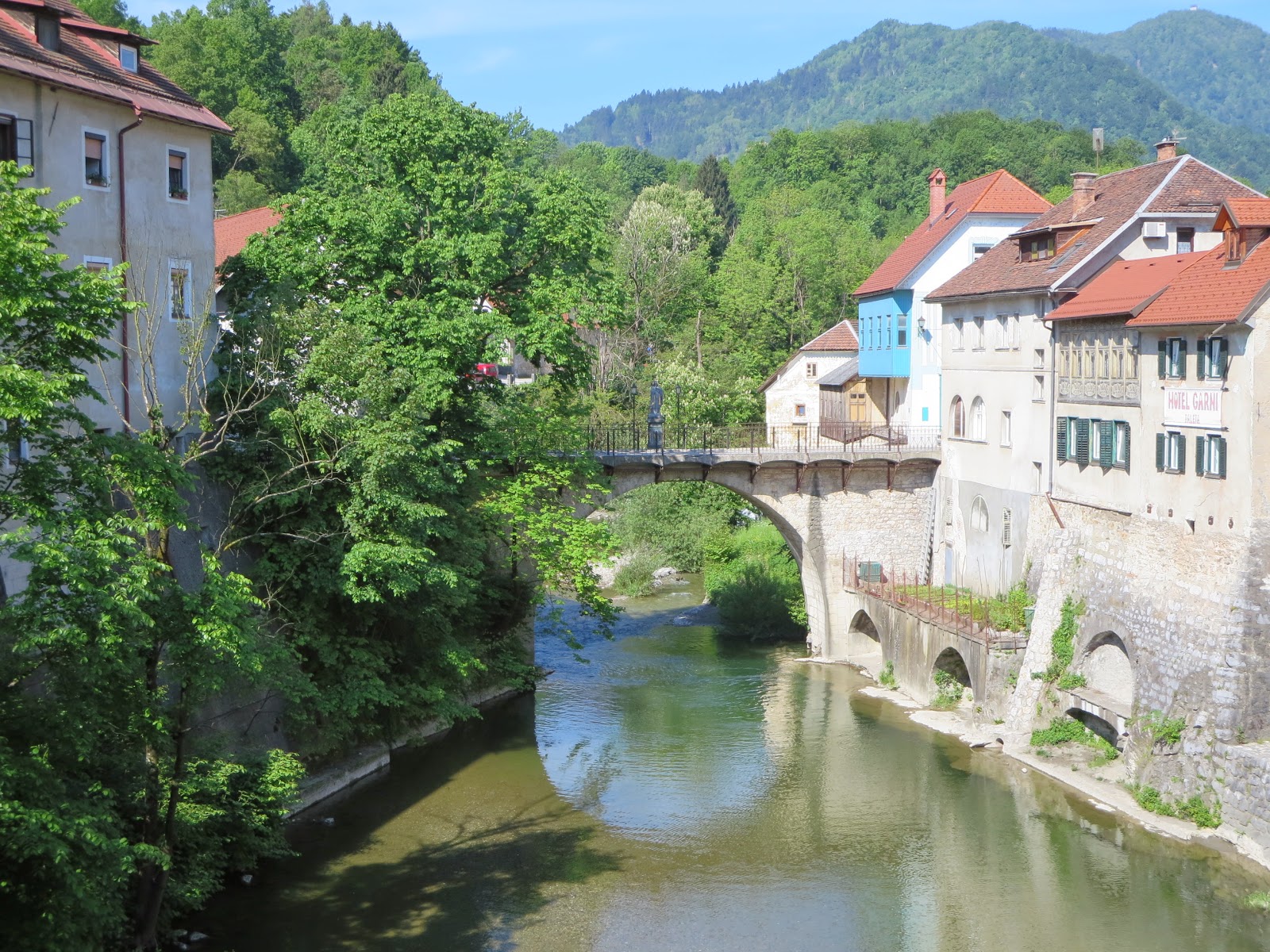 From Škofja Loka we made our way across that fucking gorgeous road to Lake Bohinj. By the time we got there we were famished, and the manager at the B&B had recommended a place for lunch a few kilometers up the road from there, so we detoured that way. I have to say I’ve never driven a road that was so narrow for so long. It went through several small villages where it was hard to tell the difference between the main road and someone’s private driveway, and we at one point found ourselves dead ending on what turned into a gravel path. There were several points on the road where mirrors were set up to allow you to avoid crashing into cars coming the other way as the road twisted around small stone and wooden cottages. We finally made it to Srednja vas (which means “central village”) and Gostilna Rupa, which was lovely, with a pleasant terrace overlooking the mountains. When we arrived, a little after noon, it was practically empty, but at 13:00 sharp it seems as if the entire village showed up. The food, actually, was good but not memorable. 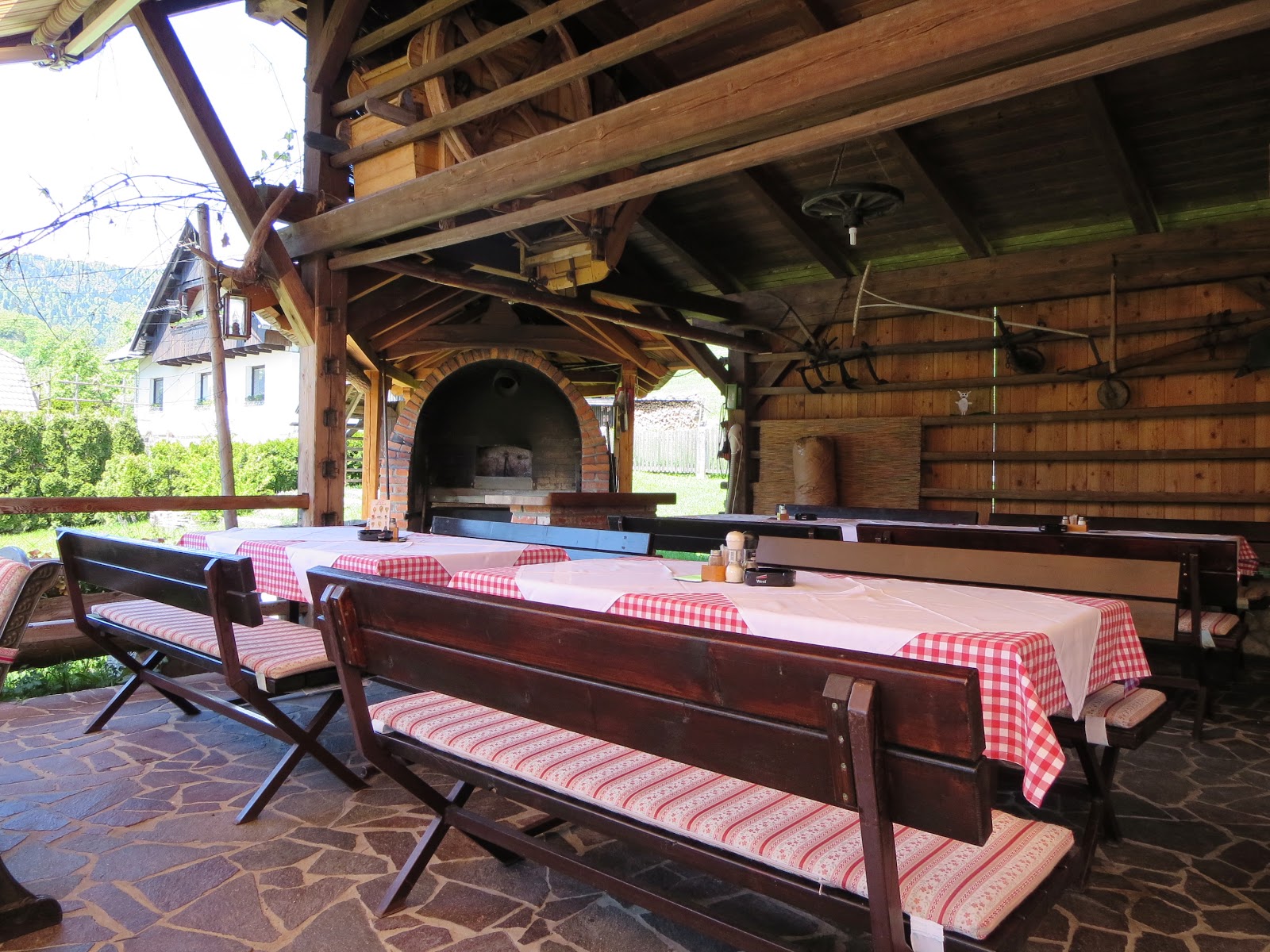 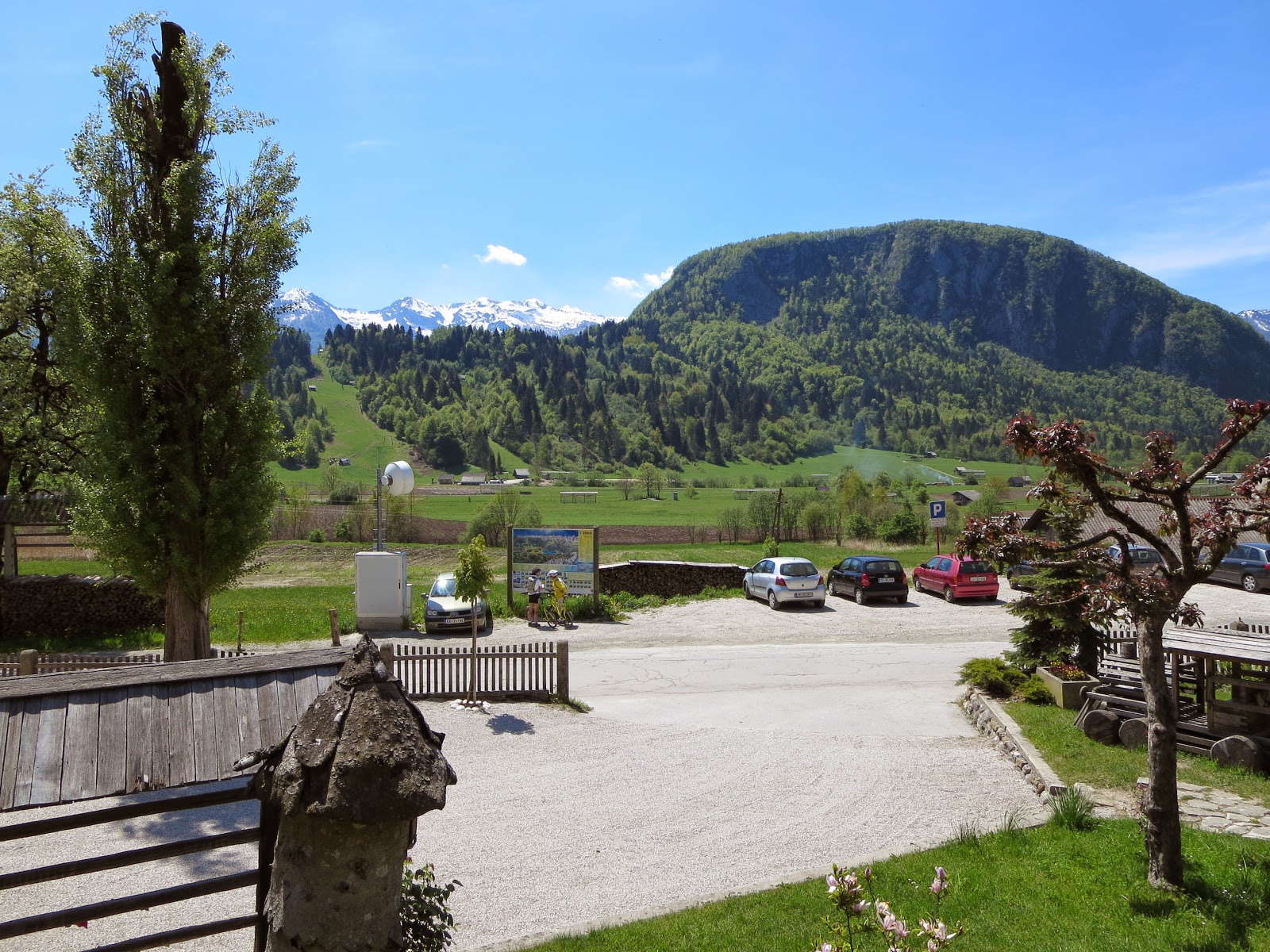 Then we went back to Ribčev Laz, the small settlement on the eastern end of Lake Bohinj. Unfortunately, we realized that the day was slipping away, so we didn’t have time to explore the lake, which is the largest in Slovenia. So we lingered just a short while before making our way north to Bled.

Bled was also fucking gorgeous. Our first stop was at a lakeside cafe for the famous Kremna rezina, also known as Kremšnita or Bled Cream Cake. It was one of the foods I was specifically looking forward to on this trip.

Otherwise, Bled was all about the lake. The path around the lake is about 6.7 kilometers, or just over 4 miles. With a detour up to Bled Castle and frequent stops to gape at the scenery and take pictures, it took us about three hours to walk. Slovenia’s only island is in the middle of the lake, and we passed up the opportunity to take a boat ride to the island, but not to take a lot of pictures, of it (seeking out the best perspective and the perfect frame) along with the castle and the surrounding mountains. 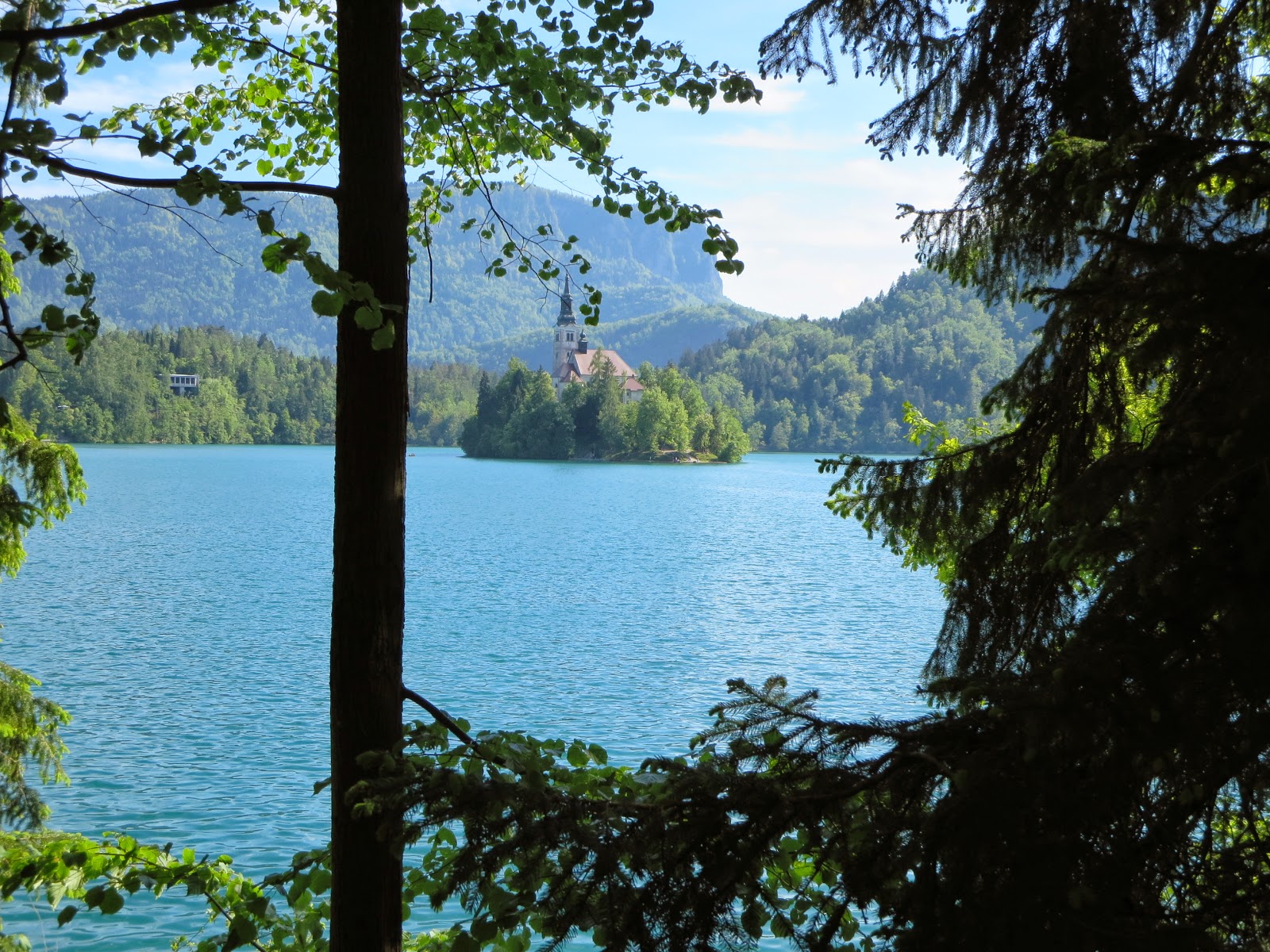 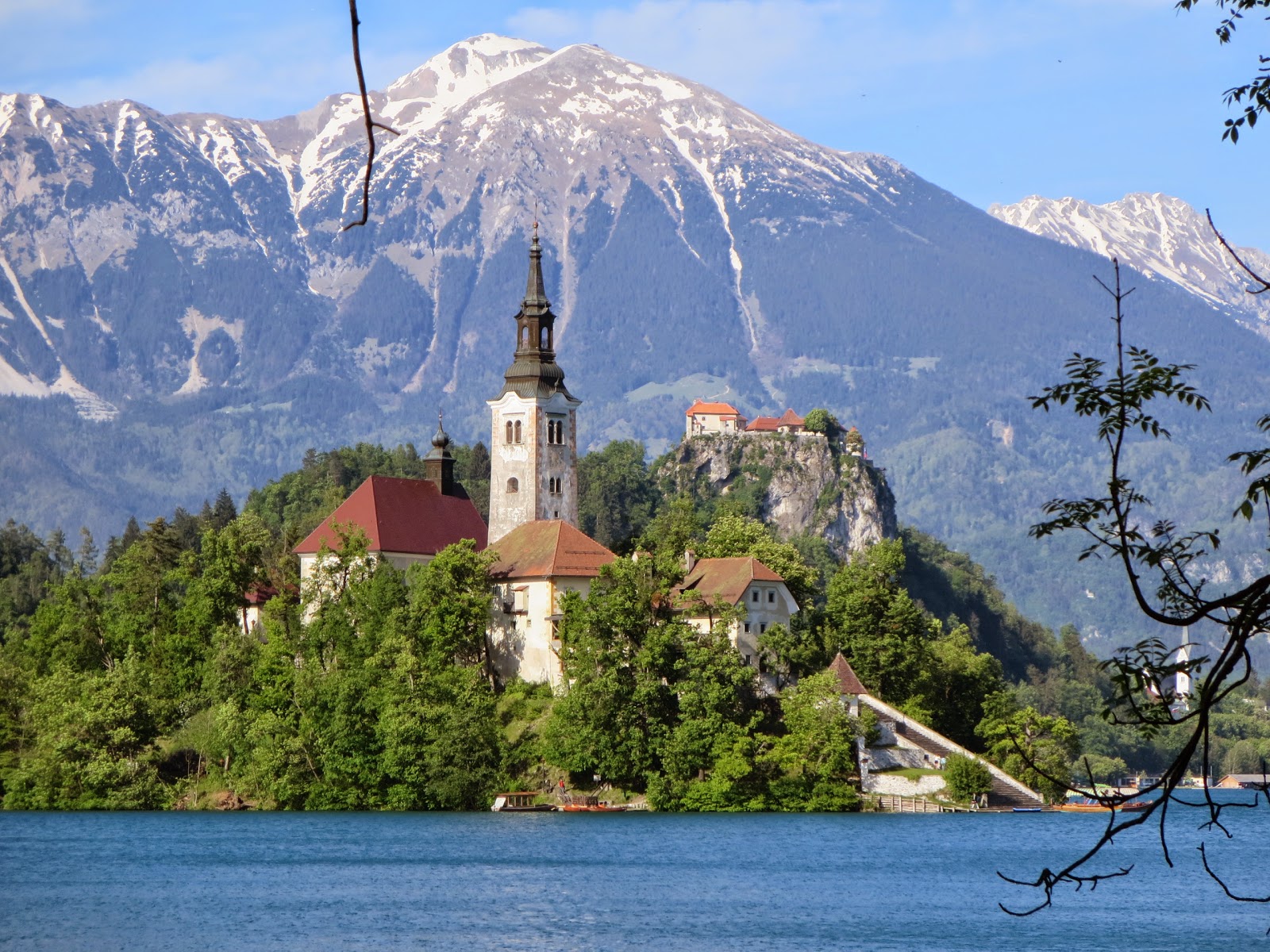 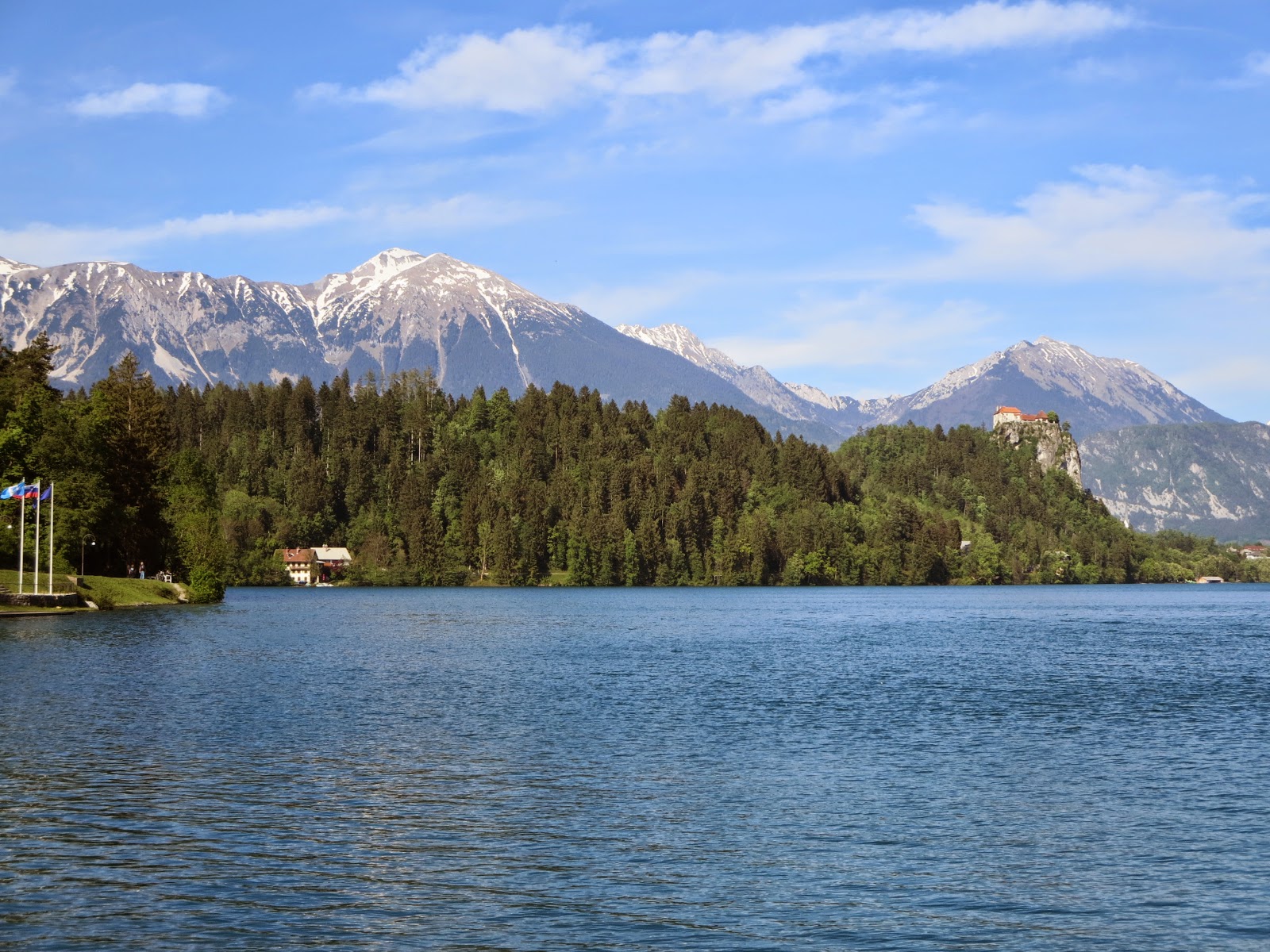 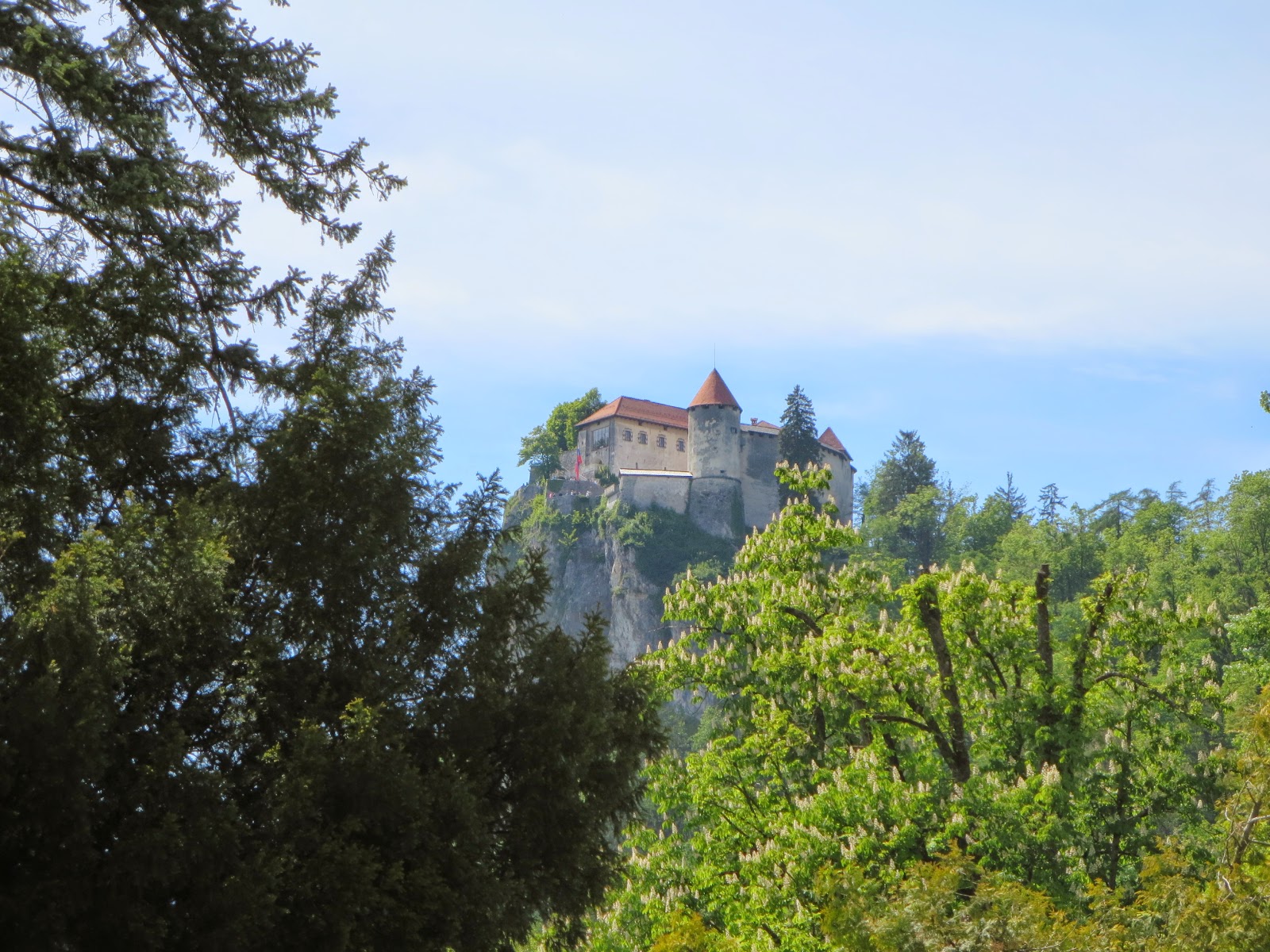 Toward the end of our walk we were greeted by a charming man nicknamed Bobi who was doing watercolor paintings of the island. Troy bought one, and then he personalized the back of the picture for her. 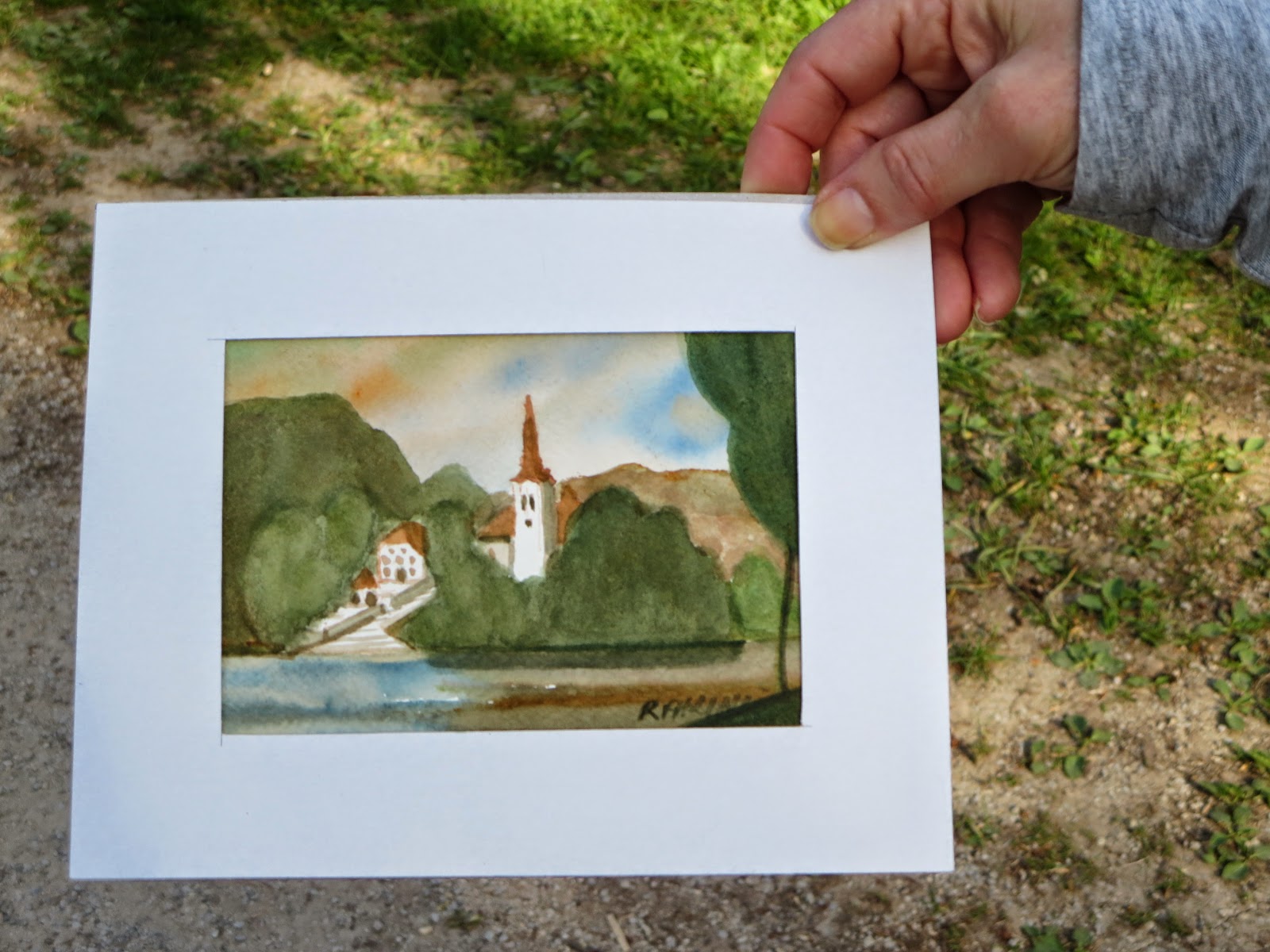 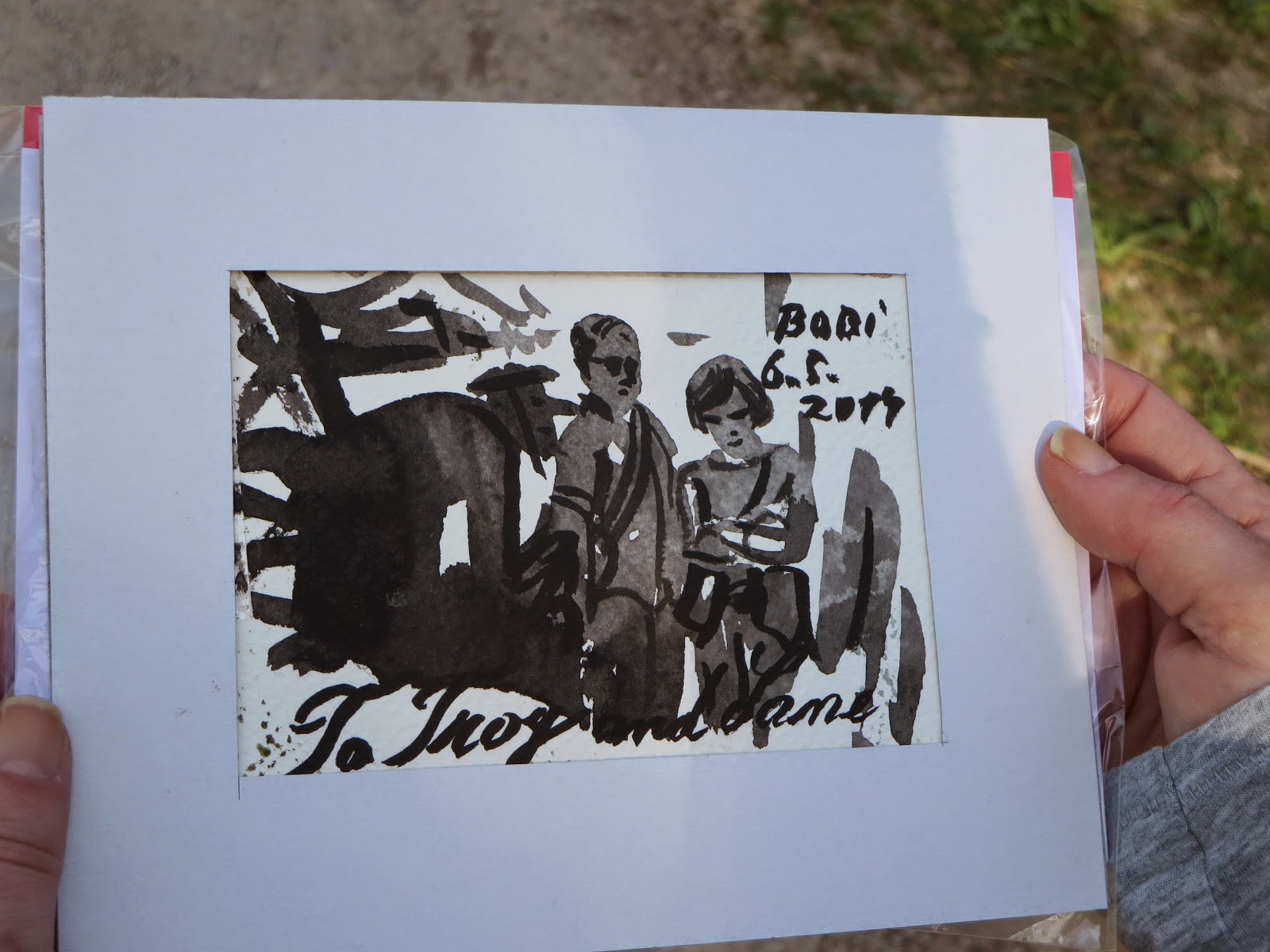 It felt like a long day, and we were exhausted, so we made the 40 kilometer drive back to Ljubljana via the autoroute, zipping along at 120 Km/h.

Following a quick shower (we were both afraid that if we sat down we’d fall asleep) we took one final stroll to the old town, ending up back at Julija, the restaurant from our first night, and it was maybe even better this time. We had the same waitress, but different food (I forgot to take photos, but I had gnocchi with truffles and porcini mushrooms, and Troy had sea bass that was scrumptious). At the end of our meal, we skipped dessert but the waitress brought us each a complimentary glass of dessert wine.

Got back to the B&B around 21:00, and I started blogging but couldn’t keep my eyes open. The bad news is once again I woke up after not nearly enough sleep, so still running on about 4 hours a night.

The good news is the weather has been spectacular so far. Daytime highs in the low 20s (Celsius, of course; when in Ljubljana…) and lows around 4–5.

Today it’s farewell to Ljubljana. After breakfast we’re off to Kobarid.