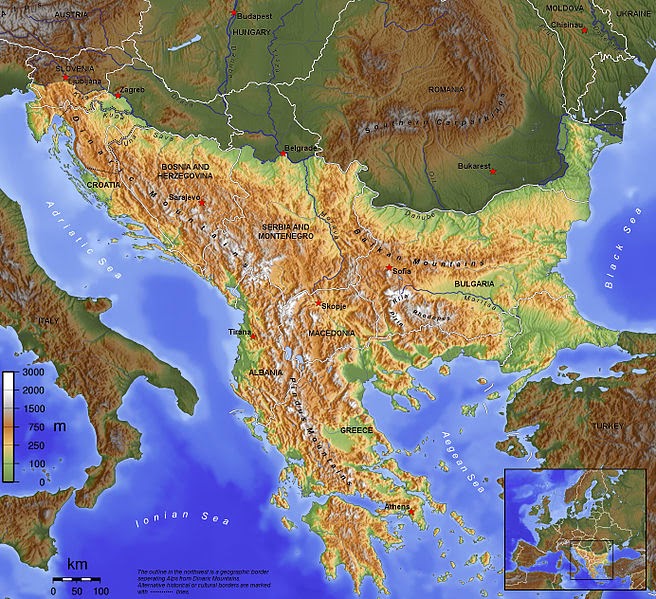 I started this post writing about my enthusiasm for seeing Sarajevo because of the extraordinary history that city has experienced.  This is the centennial year of the assassination of Archduke Franz Ferdinand of Austria and his wife, Sophie, the touchstone for World War I.  It’s also 30 years since Sarajevo hosted the Winter Olympics. (I came across some photos of the facilities that were used in the 1984 games and have since gone to neglect or damage from the Yugoslav War.)  And it’s stunning to think about what was going on in Sarajevo and throughout the areas I’ll be visiting just 20 years ago.

The more I wrote, the more I realized that I don’t know anything about where I’m going other than some basic, perfunctory facts. I love history, and I love seeing places that have historical significance. But I want to know more. So I’m going to postpone writing about my tourism plans and use this post to explore some of the history of the former Yugoslavia, so that after I’m there, I will truly know where I’ve been.

The Balkans are a peninsula that juts into the Mediterranean between the Adriatic and Ionian Seas on the west and the Black and Aegean Seas on the east.

The Balkan Peninsula comprises all of Albania, Bosnia and Herzegovina, Bulgaria, Greece, Kosovo, Macedonia, and Montenegro, and parts of Croatia, Romania, Slovenia, Serbia, and Turkey, plus a tiny portion of Italy around Trieste.  So it’s probably not correct for me to refer to this trip as my Balkan adventure.  But “The Balkans” is generally interpreted broadly to include all of the former Yugoslavia, and thus includes the four countries I’m visiting on my trip.

Up to the early 20th century the region was part of the Ottoman and Austro-Hungarian Empires. The Balkan Wars of 1912 and 1913, in which Bulgaria, Greece, Serbia, and Montenegro overthrew Ottoman rule, led to the establishment of separate states, a phenomenon that was called “Balkanization.” The assassination of Franz Ferdinand (the heir to the Austro-Hungarian throne) in 1914 and the First World War brought about the dissolution of both empires. The Kingdom of Serbs, Croats, and Slovenes was formed in 1918, right at the end of the war, and in 1929 the country was officially renamed the Kingdom of Yugoslavia (literally “land of the south Slavs”).  The first king was Peter I, previously king of Serbia.  He died in 1921 and was succeeded by his son, Alexander I, who was assassinated in 1934.  His son, Peter II, was just eleven years old at the time, so the Kingdom was ruled by a cousin until 1941.  But then the royal family fled to England just prior to invasion by the Nazis, who occupied Yugoslavia until 1944, and under pressure from the British, Peter II recognized the new Democratic Federal Yugoslavia, and Josip Broz Tito quickly came to power, aligning with the Soviet Union and establishing single-party rule.

Tito soon broke with the Soviets and began looking more westward, instituting economic and social reforms while retaining centralized control.  It is generally acknowledged (at least as I understand it) that the strength of Tito’s charismatic personality and his policies of suppressing nationalism in favor of unity kept Yugoslavia intact despite the ethnic diversity of its separate regions.

After Tito died in 1980, the various states began looking for increased autonomy, and starting in 1991 the breakup of Yugoslavia began, leading to the various wars that lasted through much of the 1990s.

Although the term “Balkanization” originally referred to “the ethnic and political fragmentation that followed the breakup of the Ottoman Empire,”* in the 1990s the meaning of the term took on a nuance of civil war and ethnic cleansing as a result of the horrendous violence that took place after the disintegration of Yugoslavia.

The three main ethnic groups in the former Yugoslavia are the Bosniaks, who are primarily Muslim, the Serbs, Orthodox Christian, and the Croats, Roman Catholic. (A fourth group, the Slovenes, live mainly in Slovenia and have much smaller minorities elsewhere.) Each region has majority and minority populations of the three primary three ethnic groups, and this led to the desire to obtain independence as well as the civil strife that followed.

Slovenia declared independence from Yugoslavia on June 25, 1991. (Croatia declared its independence on the same day.) The Yugoslav People’s Army moved in to try to put a stop to Slovenian independence, but from what I’ve read, it seems they were hoping the Slovenians would back down easily; when they didn’t, a cease-fire was instituted, and a peace accord was signed on July 7. The Slovenians and Croatians both agreed to postpone independence for 90 days.

Because of Slovenia’s relatively homogeneous ethnic makeup, there was no civil unrest once the Ten-Day War ended. Slovenia joined the UN in 1992, the European Union in 2004, and the Eurozone in 2007.

In 1991, Serbs made up 12% of the Croatian population and nearly 50% of the police force. They were also over-represented in government and the economy. And the Serbs had the support of the Yugoslav People’s Army. The Croatian War of Independence lasted four years, brought the phrase “ethnic cleansing” into common parlance, and resulted in about 20,000 dead or missing, 35,000 wounded, and 32,000 suffering from PTSD. Ultimately Croatia prevailed, and while the Serbs still living there were invited to remain, the majority left after the war.

In October 1991 the Serb members of the Bosnian parliament formed a separate assembly, and in January 1992 they established a Serbian Republic, called Republika Srpska, within Bosnia. Croats attempted to do the same. On February 29 and March 1, 1992, Bosnia and Herzegovina held a referendum for independence; most of the Serbs boycotted the vote, and turnout was just over 63%, with 99.4% of the vote in favor of independence. On March 3, 1992, The Republic of Bosnia and Herzegovina declared independence. Within a matter of days Serb paramilitary forces were attacking.

Several horrific events symbolize the war. The massacre at Srebrenica, carried out by Ratko Mladic, Chief of Staff of the Army of the Republika Srpska, killed 8,000 Bosniak men and boys. The Siege of Sarajevo, the longest siege of a capital city in the history of modern warfare, lasted almost four years and resulted in thousands of deaths, both of civilians and soldiers. The city’s population today is 25% less than before the war.

Eventually the Croats and Bosniaks joined forces to defeat the Serbs. The Bosnian War ended with the signing of the Dayton Accords on December 14, 1995. It is not known how many people died in the war, but it may be as many as 200,000, with 50,000 women victims of genocidal rape and 2.2 million persons displaced. Individuals on all three sides were found guilty of war crimes including genocide, crimes against humanity, and breaches of the Geneva Convention. Radovan Karadžic, former president of Republika Srpska, and Ratko Mladic are currently on trial in the Netherlands.

The violence in the former Yugoslavia did not end with the end of the wars in Croatia and Bosnia. Kosovo, a region of Serbia until it declared independence in 2008, saw significant ethnic cleansing involving the large Albanian majority (92% of the population) by Serbian leader Slobodan Miloševic, who was brought to trial for his war crimes but died in prison in 2006.

For the most part, the region is peaceful today. Leaders of Serbia and Croatia have issued formal apologies for their role in the ethnic violence in Bosnia.

The Dayton Accords created separate Serb and Muslim-Croat entities within Bosnia and Herzegovina, and the central government has limited power. This past February in Bosnia there have been protests and riots, starting out primarily in the Muslim-Croat areas but later spreading to the Republika Srpska.  These activities do not seem to be ethnically motivated; rather they are a reaction to frustration with the political chaos and badly-managed economy.

I did a lot of reading (mostly Wikipedia, but a few other articles as well) in putting together this summary of the history of the area I’ll be visiting. It was very disturbing, and I’ve only captured a small bit of it here. If you are interested, I invite you to read more. Start with these articles, and follow links to others.

I hope I will have the opportunity to talk with people who lived through this time about their experiences during the wars. I look forward to learning more.

Whenever I go on a trip, I hope not to become a tourist, at least not the entire time. Sometimes it can’t be helped. There are places I do want to take a tour of. There are places I want to visit just to enjoy the beauty and see the sites, or just to relax. But I will strive to be mindful of the tragedies that took place on the ground I tread upon. And I will strive to be respectful of that ground.