Yes, I took pictures of the bridge. In daytime and after dark. 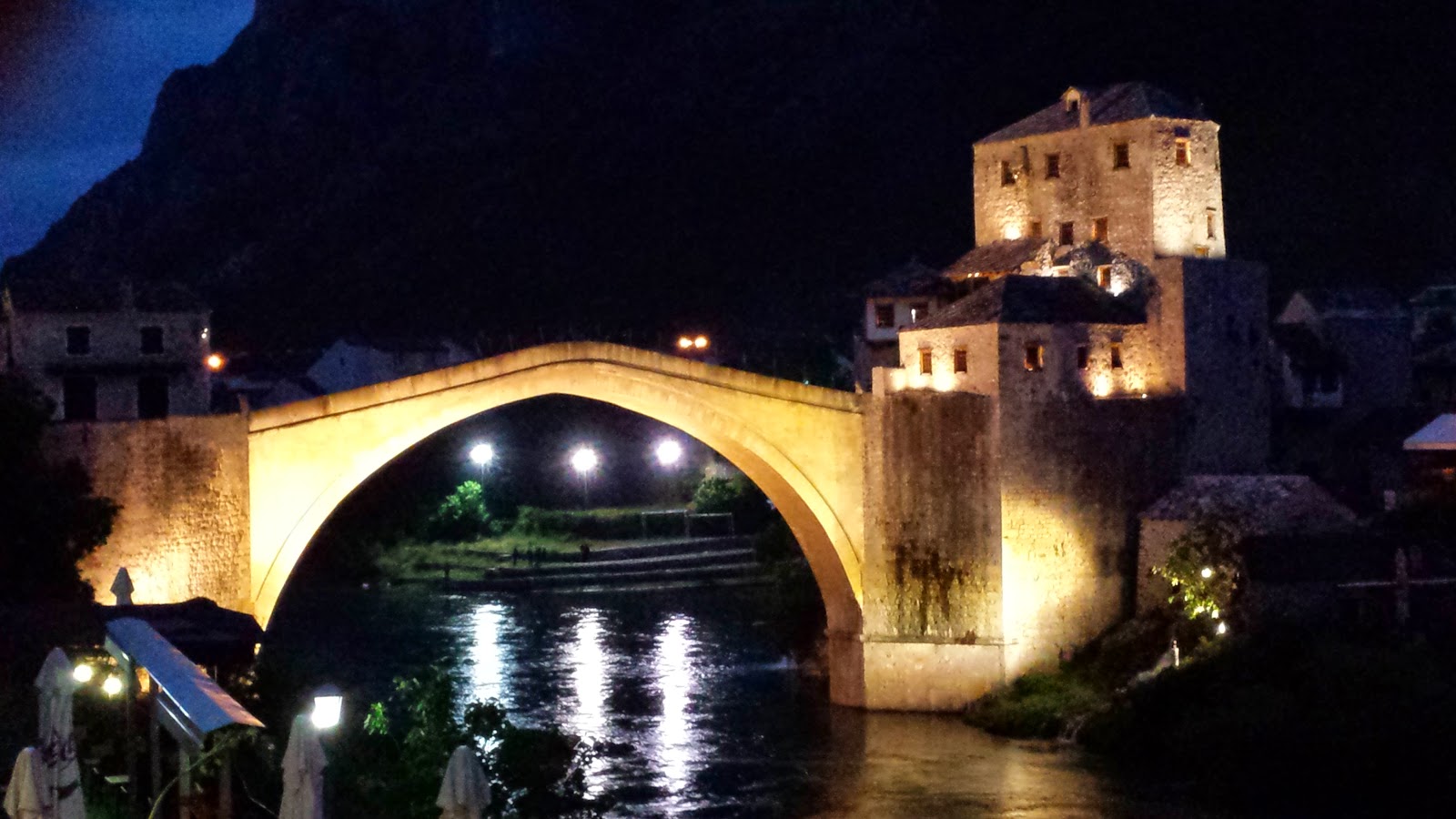 I even took a “bridge selfie.” 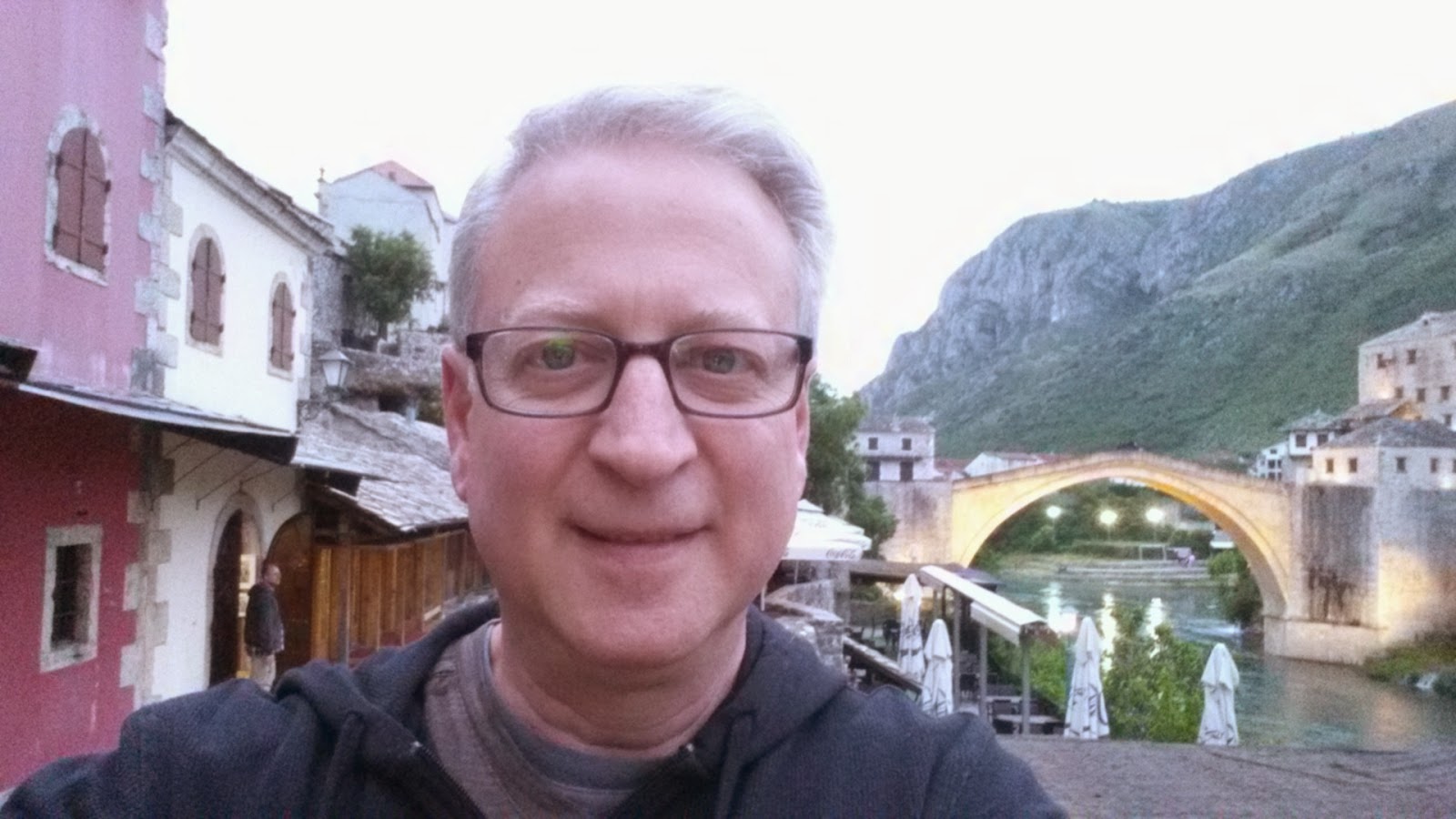 Yes, I wandered among the souvenir shops. 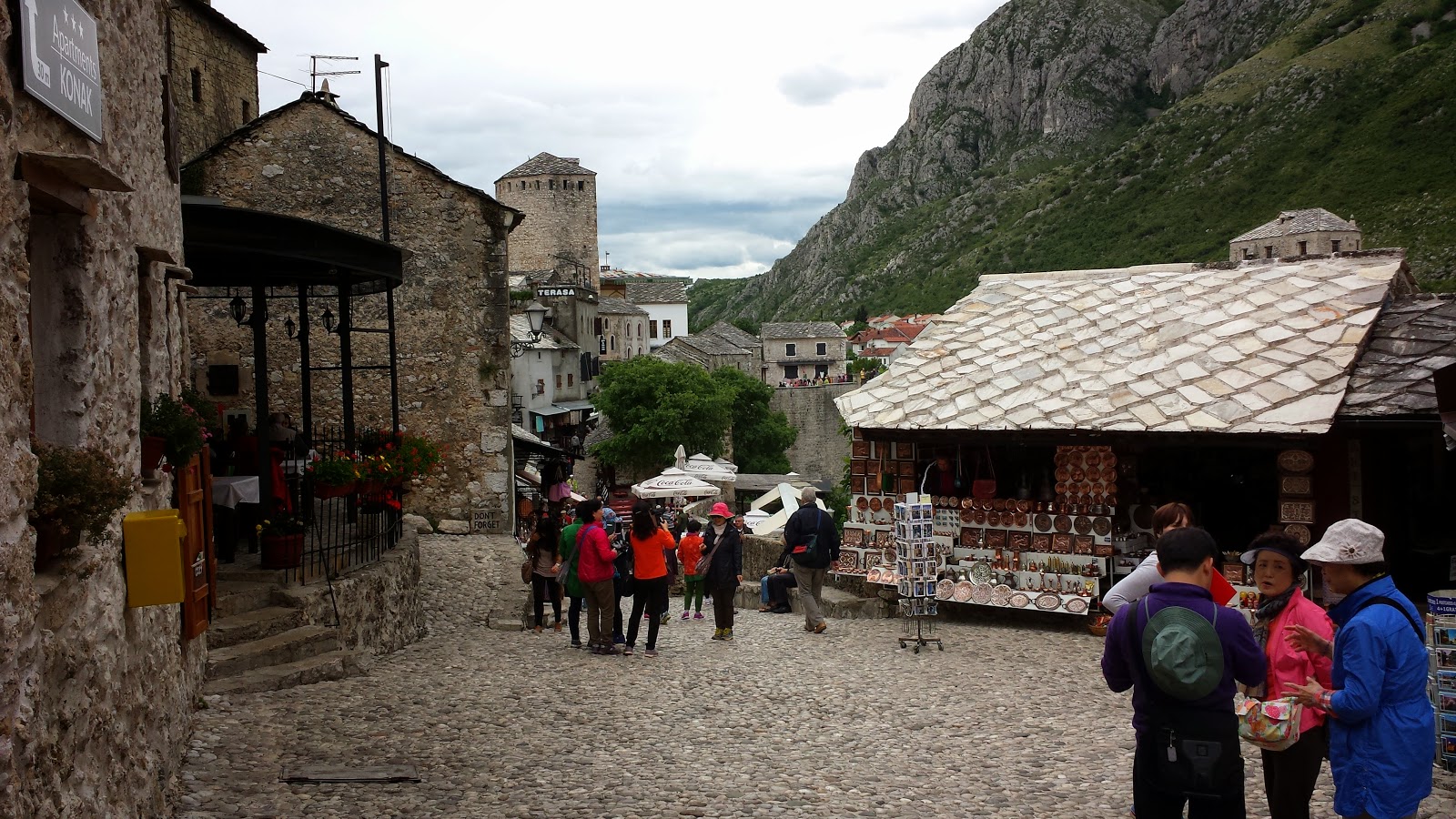 Yes, I ate a big plate of various grilled meats that are popular Bosnian specialties. 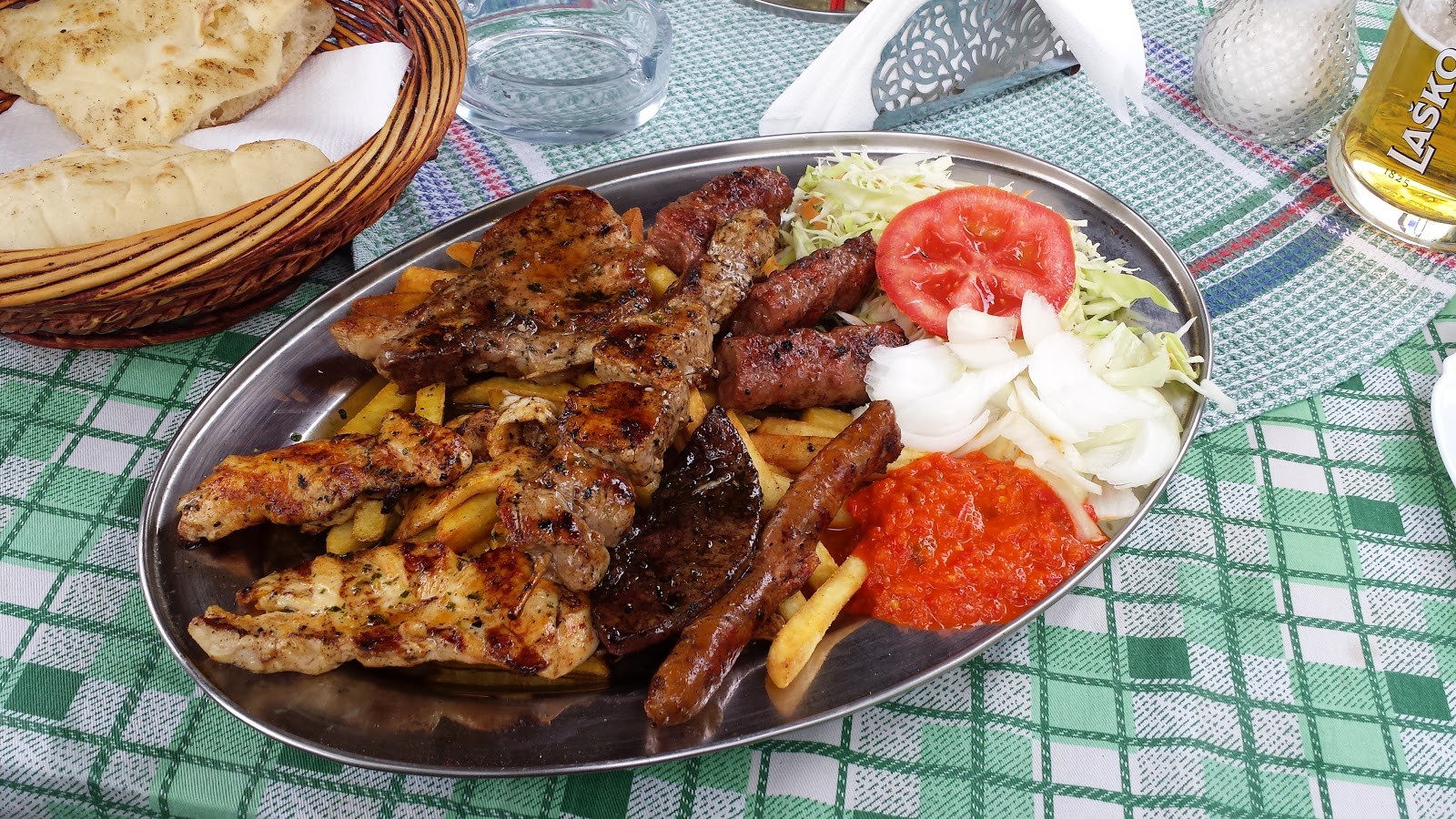 And yes, I stopped to take a picture of beautiful scenery on the drive between Sarajevo and Mostar, which, I have to say was magnificent, with some of the most stunning vistas I’ve seen on this trip so far. The mountains, the lakes, the rivers in valleys and in gorges… I wanted to stop and ogle the views at every turn. 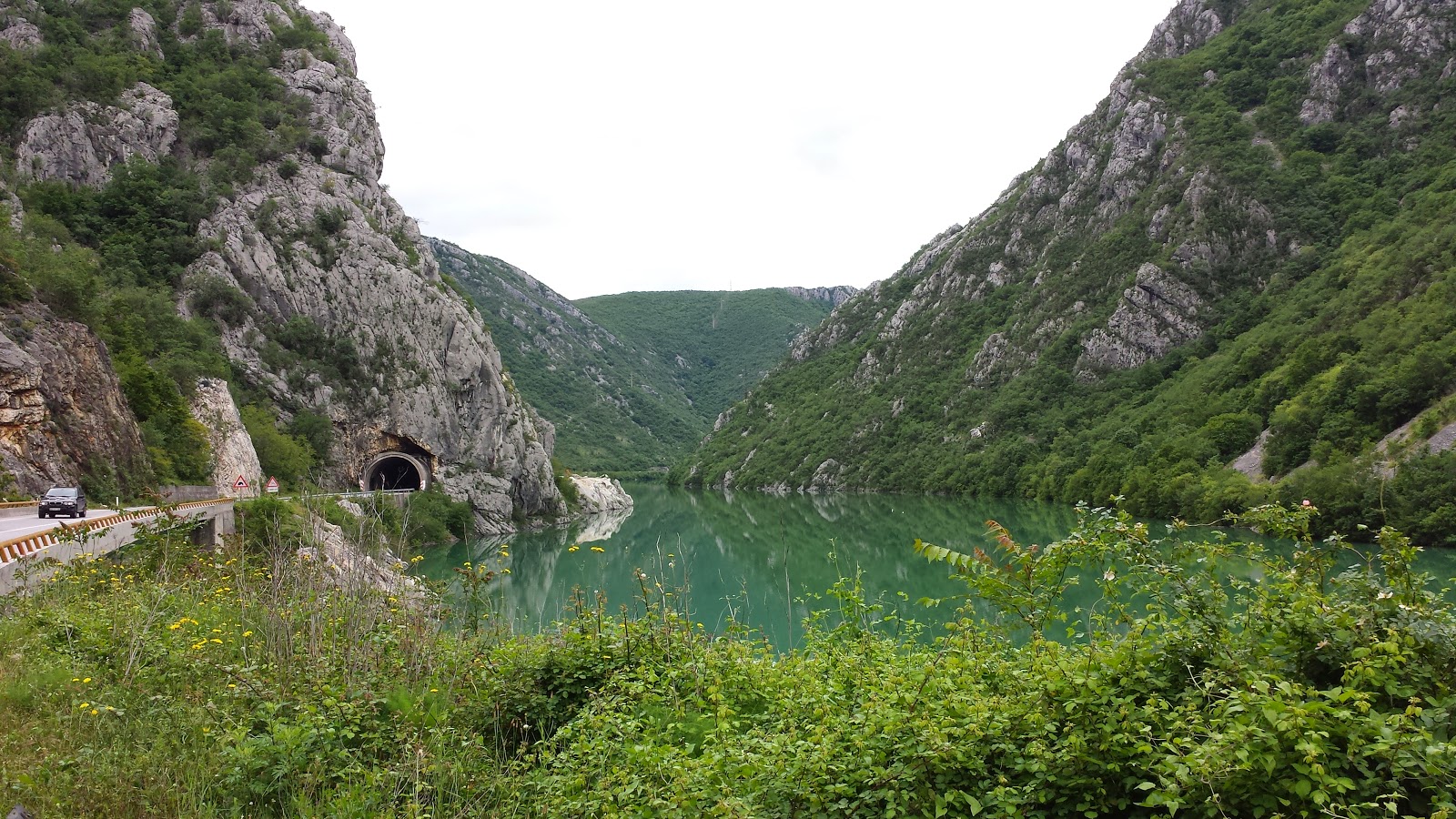 And when I passed through Jablanica, famous for its many restaurants serving spit-roasted lamb, I had to stop and take a picture of that. 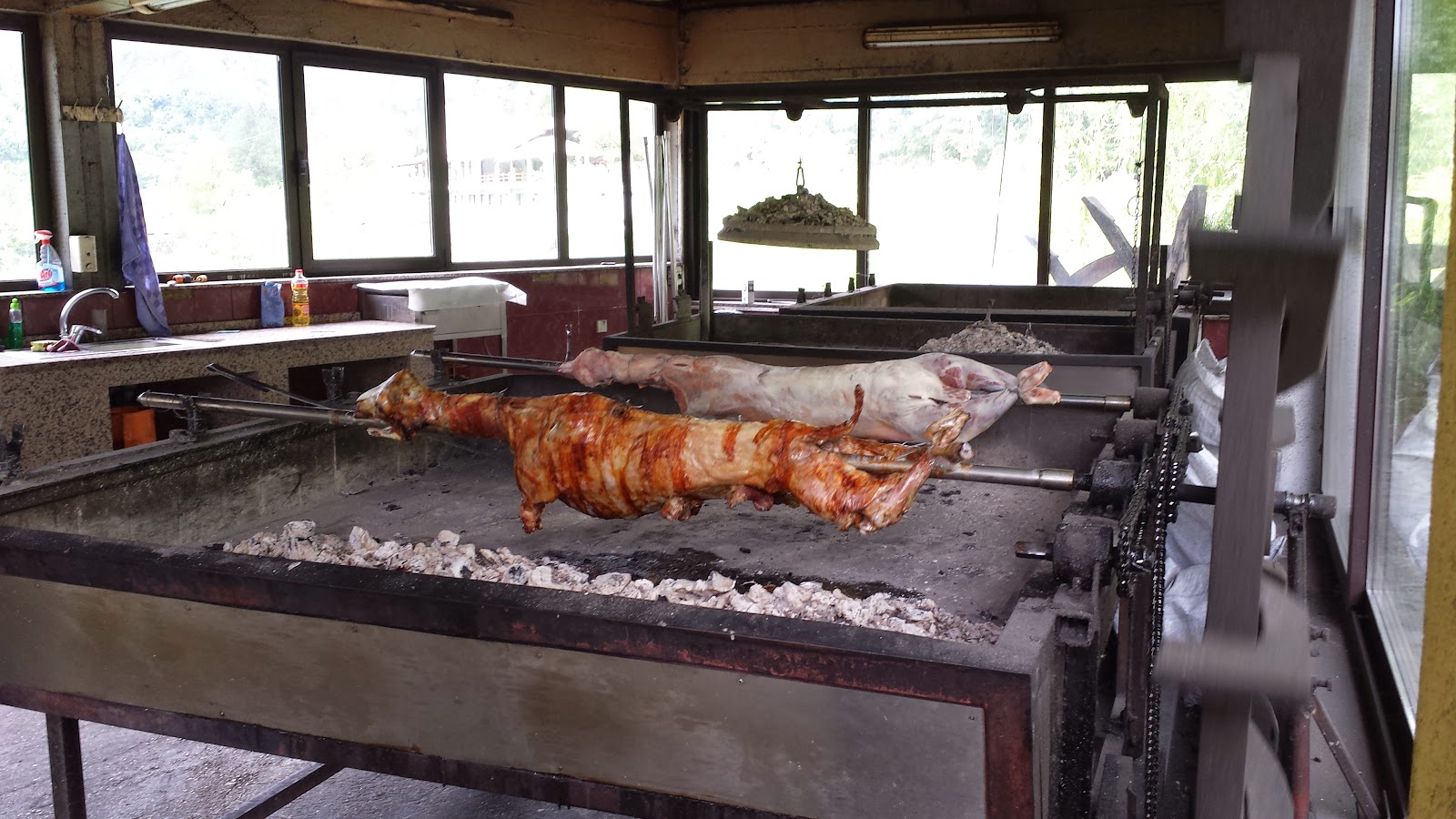 But I love to travel because I get the opportunity to connect with people, and today I had that chance four times.

As I wandered among the shops, I looked for the rare instance of a place that sold things that didn’t look exactly the same as what was being sold somewhere else. The first such place I found was a coppersmith shop. A young fellow was in there working on a sheet of copper, hammering away. The work in this shop was unique, and I asked him about it. Most of it was his father’s work; he is still learning the craft. I couldn’t afford anything in this shop, nor could I fit it in my luggage, but I could tell he was so proud of the work they do. He showed me a book that featured the best practitioners of arts and crafts in Europe, and the featured metal worker was his father. One of his father’s pieces, in fact, was on the cover of the book.

Later, after I’d had my fill of the crowds (this was the most tourist-laden place I’ve been on this trip so far), I came back to where I’m staying and took a nap, and then came down to ask the receptionist to give me a tour. I’m staying in Muslibegovic House, a 300-year-old Turkish style home that was built by a wealthy family who still owns it. It is a museum as well as a hotel, and guests get a free tour.

She showed me around and gave me the standard historical background. At the end, I asked her how the house survived the war, and that led into a conversation about her wartime experience. When I asked her about the Dayton Accord, she rolled her eyes with the same disdain that Amir had. The Dayton Accord set up a triple presidency for Bosnia. One must be a Serb, one a Croat, and one a Bosniak. (So, for example, this makes it illegal for a Jew to be president.) Plus the Federation of Bosnia-Herzegovina and the Republika Srpska each have their own presidents. Nothing gets done because there is never any agreement among the factions. I asked her if she thinks it will change. She said it has to; it can’t stay the way it is indefinitely. More about her later.

By now I figured the crowds, made up mostly of day-trippers who are staying in Croatia) would have gone back to wherever they’re staying, so I went back to the Old Town. I had my last 9 KM (about $6 US) in my pocket, and since I’m leaving Bosnia tomorrow, I figured I may as well try to spend it.

Most of the souvenir shops were shut down, but I found an art gallery that was open. That’s where I met Anil Jakirovic. 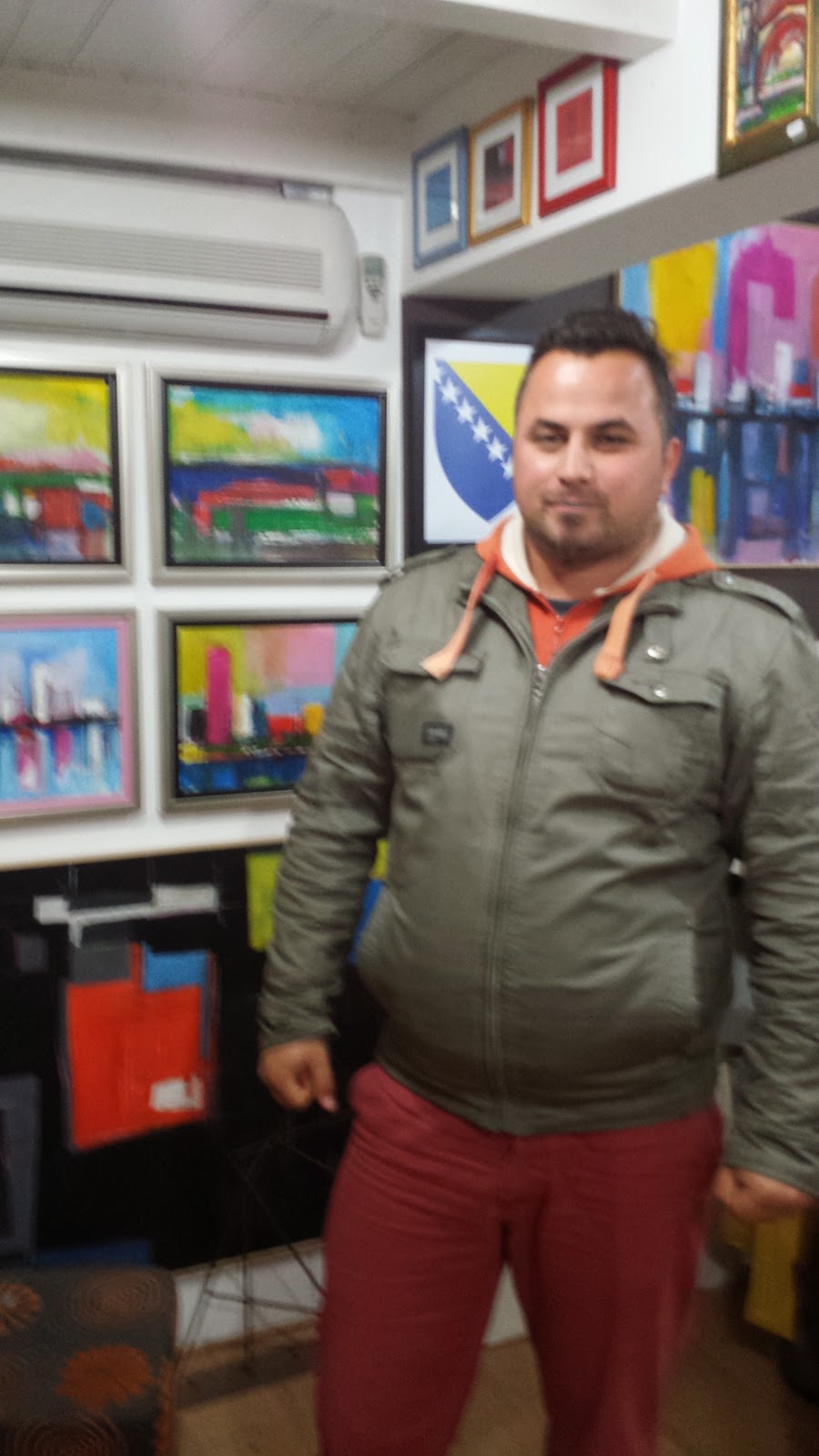 Anil is a painter, as is his father and his brother. I was admiring the work in his gallery, and he had a rack of cards with prints of his work for 2 KM each. I asked him to show me some of his favorite pieces, and he showed me a few abstracts, which I liked. He also has a lot of paintings of the bridge. I realized that he paints those because that’s what people buy. So I picked out two cards from the rack that were of his favorite pieces and I asked him to sign them and put the titles on them, which he did. I handed him a 5 KM coin, and he reached into his pocket to get change, and I said, no, you keep it. He looked so touched, and he shook my hand and said, “My name is Anil.” I left, but I came back to snap his photo.

I still had 4 KM left. I hadn’t eaten dinner and was still full from the huge late lunch I had. So I stopped in a Pekara (bakery) a bit away from the Old Town and an old man came out from the back. I asked him if he spoke English, and he made a gesture indicating just a little. So I put my 4 KM on the counter and asked him to pick some things for me. He filled up a huge bag of sweet and savory breads and pastries. Then he asked me where I’m from. I said I’m from the USA. He said he is from Pristina, Kosovo, and he is Albanian. I asked him if Kosovo is fully independent, and he didn’t understand what I meant. I said, not part of Serbia? With a sneer he said, “No Serbia.” And then he gave a cheer for Bill Clinton, though I’m not sure why.

I came back to the hotel and brought my laptop down to the lobby, because the WiFi doesn’t work in my room. While I was waiting for my pics to upload to Picasa, I got into a long conversation with the receptionist, whose name is Sanila. It turns out she grew up in Mostar and her family has lived here for many generations. She graduated from the local university with a degree in Bosnian language and literature, so we talked about books. She shamed me by naming quite a few books by American authors that she has read and I haven’t. We talked about travel, about cultural diversity, about coffee in the US compared with coffee here. We talked about how she is able to recognized the difference between US and British and Scottish and Australian English, because she works at a hotel and talks to many guests from different places. I told her I probably couldn’t tell the difference between a Bosnian or a Hungarian or a Czech or a Pole or a Russian speaking English. Once again, I find myself regretting my inability to remember and capture the full essence of the conversation. But one thing stands out: she said people who visit here like to talk about the war, but the Bosnian people are not about war. They are peaceful people, and they love their country.

I hope I will have more opportunities to meet and talk with people in the final week of my trip. I also hope to see lots more pretty things and take lots more pictures of them.

Tomorrow I go back to Croatia and, I hope, back to sunshine!