Chapter 5 of Rick Steves’ Travel as a Political Act is about Denmark. I visited Denmark in 2012 and really fell in love with it. I didn’t look upon my visit to Denmark as a political act, so it was interesting to get Rick’s perspective.

(This is the fourth part of my series of chapter-by-chapter reviews of Rick’s book. See the tag Travel as a Political Act for my reviews of other chapters.)

Rick points out that Denmark consistently lands near the top of surveys of the happiest countries on earth. With high taxation but without any great source of wealth (“… the Dane’s leading natural resources are wind power, pigs, and pickled herring”), he is unsure of why the people of Denmark seem to have a high standard of living. He observes that it is a pleasant, serene, orderly, and frequently quaint place, but is sure there is more to it than that. And he concludes that they have evolved socialism as far as it can go without violating the necessary fundamentals of capitalism. He calls their society not just “socialistic,” but “social-istic.”

It seems to me the US esteems self-sufficiency over the common good. This is becoming increasingly evident in the Trump era. But I’ve been aware of it for a long time. I’ve talked to people who oppose the estate tax because it will cheat them out of their inheritance, which they did nothing to earn except be born. I’ve known people who want as little government and as possible. Nevermind that the government builds and maintains the infrastructure that is required for economic development. Or that the government educates our citizenry so each of us can contribute to ongoing growth. If I could make it without assistance from the government, why should I pay taxes to help other people make it? I find this logic confounding and unsettling.

Of course it’s a mixed bag. Here in the US, because we have lower expectations that the government will help those in need, we have a higher willingness to contribute to charity or pitch in to help when disaster strikes. Still, I’d rather live in a society where a family’s economic status is not related to the quality of education their children receive nor the quality of their healthcare.

Because of high taxation, things (as opposed to services) cost a lot in Denmark. As a result, Danes don’t buy so many “things.” The prime example Rick offers up is cars. Between registration costs and sales tax, the cost of a new car is essentially doubled. Therefore, people ride bicycles. I was blown away by the bicycle traffic all over Copenhagen, even moreso than in Amsterdam. Dedicated bike lanes (and traffic signals) and huge parking areas make bicycling the preferred mode of transportation for commuters in the city, and even for those coming in from suburbs. They even have free bicycle parking at the airport. 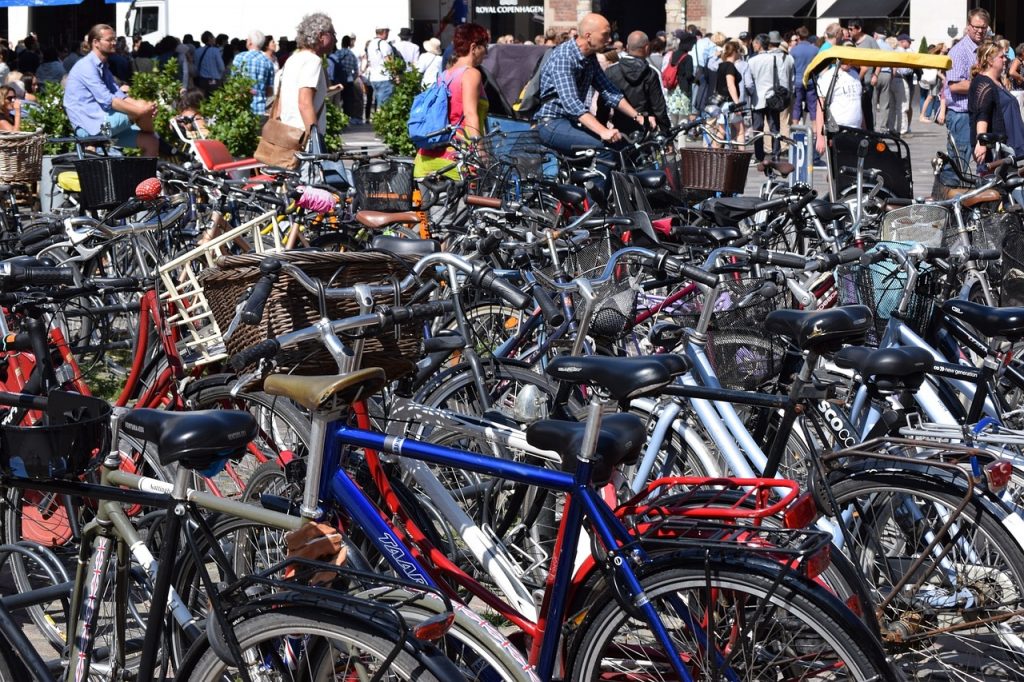 In this chapter Rick interviews a friend and tour guide from Copenhagen. In addition to getting his perspective on these political and economic issues, he asks his friend about hygge.

Hygge is an approach to living that encompasses warmth, togetherness, safety, intimacy, peacefulness, simplicity, enjoyment, and contentment. It’s about an atmosphere and an experience, rather than about things.… The key is to embrace these experiences fully, live them in the moment, and appreciate that they bring spiritual rewards along with the more tangible benefits of, say, having read a good book. Hygge draws meaning from ordinary living. It’s a way of acknowledging the sacred in the secular—of giving something ordinary a special context, spirit, and warmth, and taking time to make it extraordinary.

Does such a thing exist in the US? Maybe in small doses and in small ways. I don’t know. But I know I tend to get caught up in the race toward financial security, professional success, and the acquisition of creature comforts. And as a result, I rarely take time to appreciate those ordinary things.

As much as he loves traveling in Europe, Rick says he is always happy to come home. He is grateful to live in the USA and would not wish to live in Europe. As for me, I dream of living in Denmark.