We had a very early start this morning, departing from our Santiago hotel at 6:55 to get to the airport and fly to Rapa Nui. We flew on a 787 Dreamliner, my first time on this plane. Instead of window shades, they have buttons under the windows that allow you to darken them or “open” them. Other than that, it’s an airplane.

We landed at the airport here early this afternoon after a 5 1/2 hour flight (it’s two hours earlier here than in Santiago). We were greeted by our local guide, Tongariki, who presented each of us with a lei, and we rode in a van to our hotel, dropped our bags, and headed to a nearby restaurant for a lunch of scrumptious tuna and cheese empanadas.

Then we visited two extraordinary sites: the extinct Rano Kau volcano, and the Orongo ceremonial village.

Rapa Nui (literally “Big Rapa” to distinguish it from another island called Rapa that is, apparently, smaller) was formed from three volcanoes, all of which have been extinct for over 200,000 years. They form the three vertices of the triangular-shaped island. Rano Kau is at the southwestern tip.

Along the side of what remains of the mountain is the Orongo site. Tongariki explained to us that this settlement was used once each year as part of a ritual competition associated with the Bird Man Cult, part of the later history of the Rapa Nui people. (The moai for which the island is best known for were constructed between approximately 1250 and 1500. The Bird Man Cult arose in the later 1500s, and the competitions started around 1760 and ended n 1878. In the competition, the people awaited the first sooty tern to lay an egg on a tiny isle just off the coast. Then the competitor climbed down the side of the mountain, swam across to get the egg, and bring it back. Whichever competitor retrieved the unbroken egg won the competition, and the leader of his clan became king. 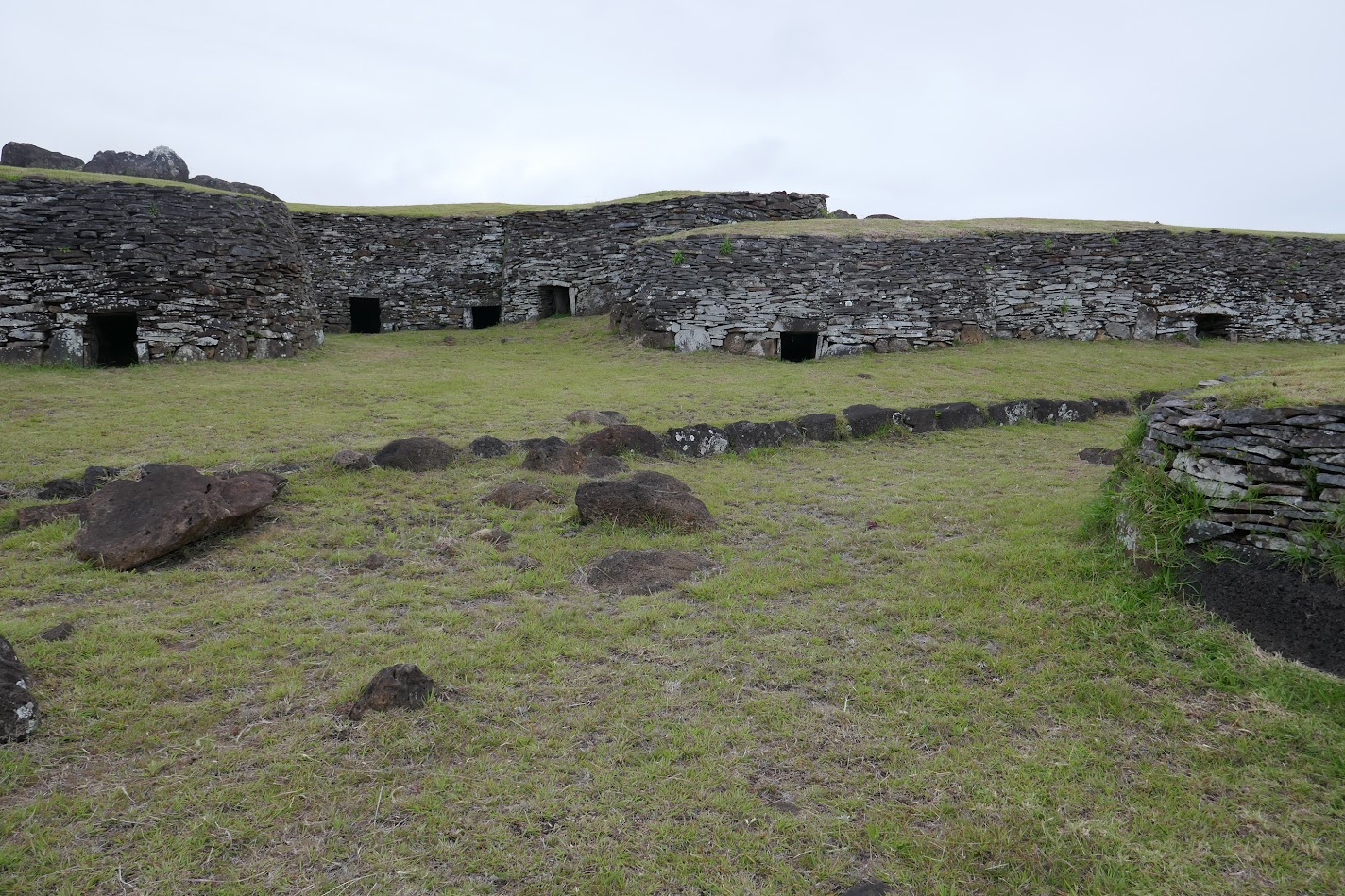 From the Orongo site we returned to the hotel, and later we met for dinner in the hotel restaurant.

Our hotel, the Taha Tai, is in Hanga Roa, the one and only “city” on the island. To call it a city is kind of an exaggeration, though, as it is quite small. There are only about 6,000 people living on the entire island, 87% of whom live in Hanga Roa. There is a single (Catholic) church, an anthropological museum, which we visited on Tuesday, and plenty of hotels, markets, restaurants, cafes, and souvenir shops that sell miniature moai carved from wood and stone.

We got an early start and visited some truly spectacular sites. We drove from our hotel to the south and then east along the southern coast of the island toward the easternn vertex. The island is just about 15 miles from west to east and 11 miles from north to south. Along the way we stopped at several moai sites.

The statues were built as repositories of the sacred spirits of clan leaders after they died, and they were considered to be alive. The moai were carved into the rock at Rano Raraku, the quarry at the volcano located near the eastern vertex, and when the front was complete, they were cut away from the mountain and slid down and then transported to the site where they were erected, and then the back was carved. There are many theories around how they were moved and raised.

When the first Europeans arrived on Easter Sunday, 1722, the moai were all still standing. But over the next 150 years, they were toppled, likely in wars between the various clans on the island. Those that are standing today were restored since the middle of the 20th century.

But I don’t want to simply recite the history, all of which is available to read about on the Internet. What was so special was to see these magnificent artifacts and imagine the effort and commitment that went into their creation. And when Tongariki spoke about them and told the various stories, he used the pronoun “we.” How moving it was to feel so connected to the spirit of his ancestors. At one time there were estimated to be 15,000 Rapa Nui people living on the island. The Europeans who came introduced smallpox and syphilis. Peruvians took them as slaves. And internal warfare took its toll. By the 1860s there were just 111 remaining Rapa Nui. Tongariki and all the remaining three to four thousand are their descendants.

Visiting Ahu Tongariki was the visual highlight of the day. The 15 moai standing there left us in awe. But Rano Raraku was truly astonishing. Here there are many moai that were completed but never erected. Some are buried up to their necks (thus giving many people the impression that the moai are merely heads). Others are still lying face up, only partially completed and not yet cut away from the mountain. Still others were slid partway down the mountain. It is not known why they stopped erecting the moai. Possibly overpopulation and the depletion of natural resources on the island were contributing factors. Many mysteries remain. Tongariki shared stories based on the traditions of his people. Archaeologists have other conflicting theories. But we will never know for sure when people arrived on the island, how the Rapa Nui people built, moved, and erected statues weighing as much as 90 tons, or why they were toppled. All we can do is marvel at the magnificent achievement and try to find our own personal connection with this nearly lost culture. 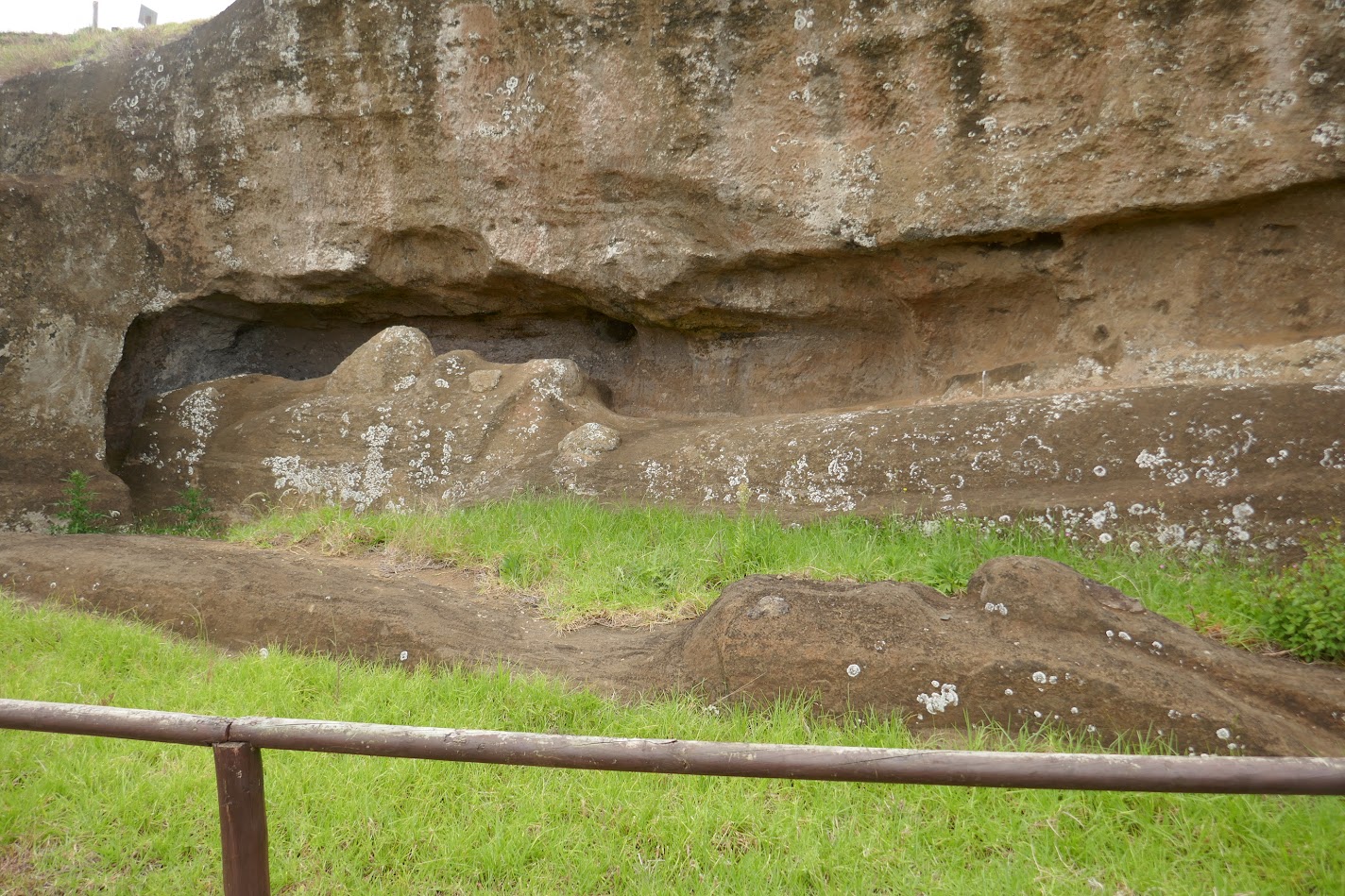 We ended the day’s excursion with a stop at Anakena, on the north shore. Here was a beach with fine white sand and water protected by a cove. A few of us had a most refreshing swim in the cool, clear, clean ocean water, a welcome break from the heat and humidity.

We were on our own for dinner this evening, but we all went together to a restaurant, Te Moana, recommended by Federico. Then we went to a traditional dance show. The dance was well done and included both traditional and more modern Polynesian-style dance, with drums, ukulele, guitar, and accordion. Much to my embarrassment, when the performers came out into the audience to pull people on stage to dance along with them, I got selected, and several of my tourmates got pictures…

We had some free time this morning. I set off with Pat, one of the other solo travelers in the group, and we walked up to the church and to a market in town, and then explored some of the shops. Then we made our way to the cemetery. I was struck by the array of deeply personalized memorials, many very recent (I saw several from earlier this year) and some for very young infants and children decorated with dolls and teddy bears and toys.

From there we headed to the museum, where we were set to meet the rest of the group to go to lunch. The museum is small but is packed with information and artifacts illustrating the geological and anthropological history of Rapa Nui. Among the artifacts is an eye from one of the moai made of coral and stone. This discovery led to the determination that the empty concave spaces where the moai eyes would be did have actual eyes. A few of the moai around the island have been restored with eyes, but most don’t have them.

From the museum we walked to the home of a woman who has a catering business, serving traditional meals to tour groups. She was a lovely woman named Uri. Her family built the house 60 years ago. She served us empanadas, tuna ceviche with rice and cabbage, and banana pastries for dessert. Her yard (like much of the island) was filled with dogs and chickens, including two broods of baby chicks.

After lunch Tongariki picked us up and we visited several more sites. My favorite was Ahu Akivi, the only place on the island where the moai look toward the water, although they actually sit back a couple of miles from the shore.

Sadly, it rained most of the day, and we missed the opportunity to visit Ahu Tahai at sunset. But Federico surprised us in the hotel bar with a wine and cheese party. We all sat around and chatted and stuffed ourselves on snacks. Afterwards, everyone called it a night, except Maureen, one of three women from Wisconsin who are traveling together, and I, who decided to walk to a nearby restaurant to get salads. (We also split an order of fried shrimp.)

Incidentally, as we got news of the election results, everyone in the group seemed to be delighted with the gains by the Democratic party. I think it’s true what Mark Twain said: “Travel is fatal to prejudice, bigotry, and narrow-mindedness.”

This morning was free until noon. I set off on my own after breakfast to revisit some of the places Pat and I went to yesterday so I could get pictures when it wasn’t raining, and I visited Tahai, which we missed yesterday because of the rain.

At noon Tongariki picked us up and took us to one final site, Vinapu. Here was some construction that looked so sophisticated, with stones piled in perfectly aligned seams. The moai here are all toppled and not restored.

Then we headed to the airport, and Tongariki presented each of us with a moai necklace. As I write this we’re flying back to Santiago. Today we lose the two hours we gained when we flew to the island.

I will never again refer to Rapa Nui as Easter Island. I told Tongariki as we bid him farewell that his ancestors would be proud of the way he represented them to us. He truly honored them. And I was honored to have met him and learned from him about the stories of the Rapa Nui people.

Iorana, incidentally, is the Rapa Nui word for “welcome,” and on the island people use it as a greeting, much like “aloha” in Hawaii. So to all who read this I say, “Iorana.”

P.S. I wrote most of this on the plane this afternoon. I am finally finishing at 12:45 a.m. We have breakfast at 6:00 and then off to the airport by 6:45. I hope you appreciate my staying up so late to finish this for you.