As the crow flies it’s only about 80 miles from Bariloche, Argentina, to Puerto Varas, Chile, but to drive around all the lakes took the better part of the day. And that was to our benefit, because we got some beautiful scenery all the way. It was remarkable how quickly the terrain transitioned from the high desert (aka steppe) to forest to mountains.

We exited Argentina after a few hours’ drive; then we drove for an hour more and crossed the actual border into Chile, but we didn’t arrive at Chilean customs and immigration until about an hour after that. Then after another hours we stopped for lunch at a dairy farm with a little restaurant, and adjacent to the restaurant was an antique car museum, consisting mostly of Studebakers. Not the museum we expected to find on a dairy farm in the Andes.

At the lunch stop we also switched buses and said good bye to Ezekiel, our fabulous local guide from Bariloche. He was the best guides so far. In addition to being very knowledgeable, he had a great smile. I admit I got a little crush on him. And there we also met our local guide for Chile. Her name is Pilar. Fede prepared us for her sharp sense of humor, and this is very true. She is a lot of fun and incredibly well versed in the history, economy, geography, and geology of this area.

We arrived in Puerto Varas at about 5:00, and Fede recommended a local restaurant and made a reservation for us there, giving us a few hours to explore the town. It’s a charming resort community on Lago Llanquihue, a glacial lake about the size of Lake Erie. Lots of shops, restaurants, and cafes. And right across the lake are two massive volcanoes: Osorno, which is perfectly shaped like a cone like Mt. Fuji (See the photo at the top of this post, which I took as we were approaching from the highway. Unfortunately, the mountain was mostly covered by clouds and fog for most of the rest of our visit.) and Calbaco, which looks more like Mt. Saint Helens after the side got blown off. (As it turns out, Pilar later told us about the geology of these mountains, and Calbaco and Saint Helens are the exact same type of volcano.) The few hours we had was plenty of time to explore, and we had a really good dinner and then to bed.

At 9:00 a.m. we got on our bus and headed along the south shore of Lago Llanquihue (Llanquihue is Mapuche for “deep place” — the lake is 1,200 feet deep) toward the Osorno Volcano. The plan was to do a hike on the mountain. The road we drove on was built in 1952; before that, you had to take a boat to get to the other side of the lake.

Along the way Pilar gave us an economics lesson. Chileans are extremely fond, she told us, of money. Until the 1970s Chile was extremely poor, and their only economic driver was mining, especially for copper. Starting in the 1970s, a number of Chilean economists went to the University of Chicago to study under Milton Friedman. Known as the “Chicago Boys,” these economists came back to Chile and transformed the economy. There is a diversity of opinion about how much these economists really helped most Chilean people, but I won’t get into that. What is clear is that today Chile has the strongest economy in Latin America. They export wine to France, salmon to Norway, pasta to Italy, and kiwis to New Zealand. And though all their salmon is farmed (much of it in Lago Llanquihue), they have figured out to use every part of the fish. The eyes are a source of omega‑3 supplements. Meat from the head goes into chowder. The eggs become salmon roe in Japanese sushi. They even produce “leather” products from the skin. And what’s left is used for fertilizer and commercial fish oil. Unfortunately, climate change is causing a real problem for their salmon farming industry because salmon cannot thrive in warmer water.

Pilar also gave us a geology lesson. The Andes are the youngest mountain range in the world. This region is also geologically very similar to the Cascades in the Pacific Northwest. Engineers from Seattle have come down here to learn about building techniques, because unlike the Pacific Northwest, where the last catastrophic earthquake occurred before any cities existed, Chile has had some major earthquakes in recent history, including the strongest in recorded history in May 1960. That earthquake called a giant tsunami, and Chilean scientists were thus the first to prove the relationship between eartquakes and tsunamis.

Interesting fact: by law, the media cannot use the word “earthquake” for anything below 6.5 on the Richter scale. These must be called “tremors.”

Chile has 2,300 volcanoes. Calbaco last erupted in 2015, and we saw evidence of that yesterday when we were crossing the Andes and today. These is still a lot of ash on the sides of the roads.

When we got to Osorno, we were surprised to find fresh snow. We hiked anyway, but only about a quarter of a mile before we had to turn around because the footing was so difficult and slippery, and the wind was fierce. But it was really fun and exhilarating. Back in the ski lodge we enjoyed hot chocolate before getting back on the bus.

Our next stop was Petrohue (literally “misty place”). We walked through a beautiful temperate rain forest (again, a strong similarity with the Pacific Northwest: much of the vegetation here is the same as in the Hoh Rainforest on the Olympic Peninsula).

The pictures speak for themselves. 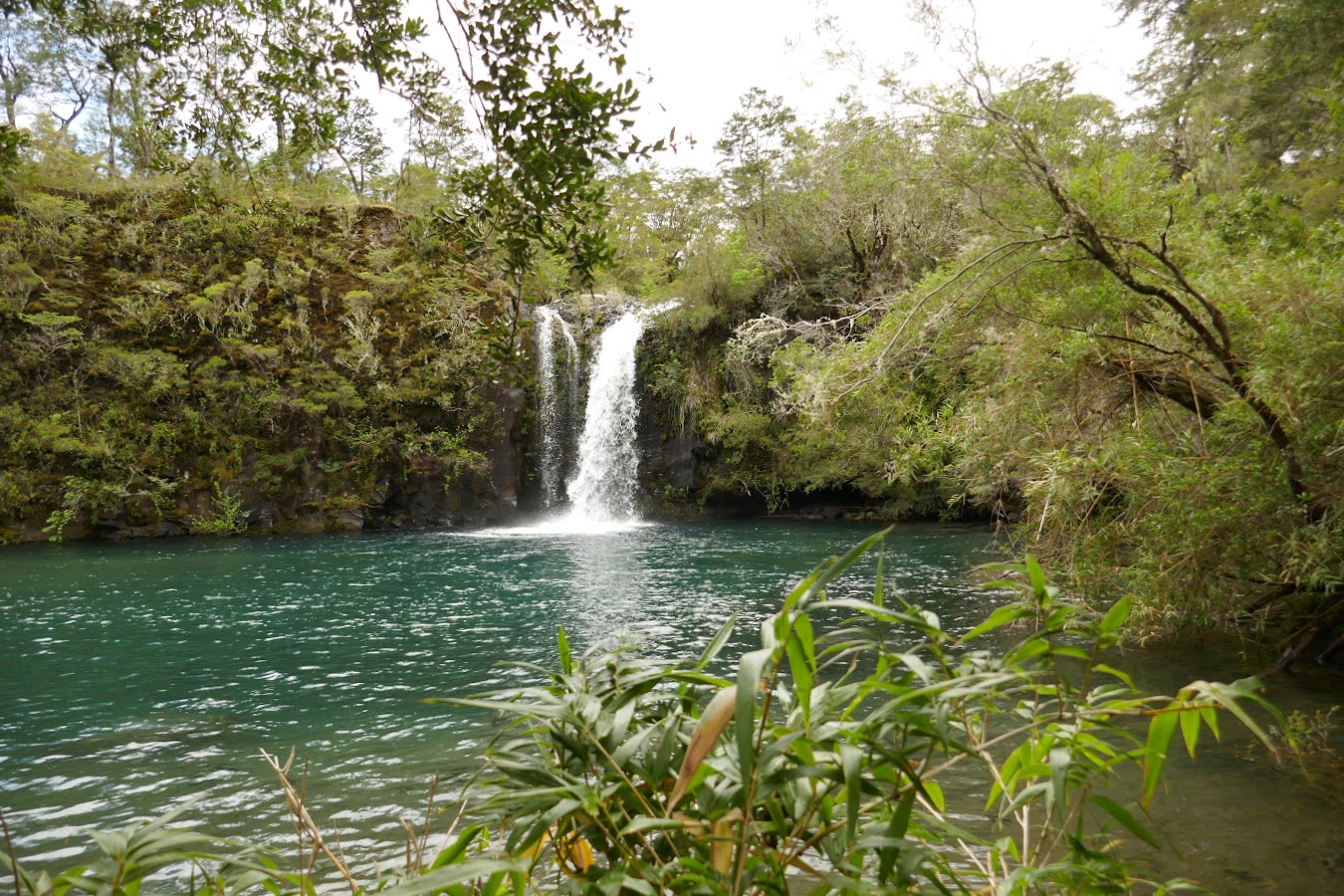 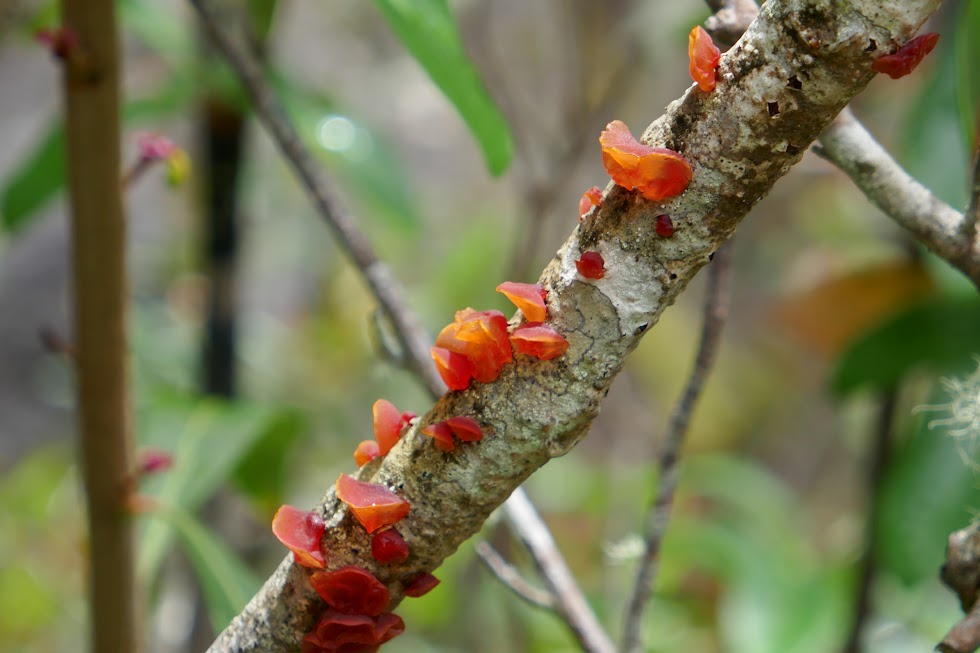 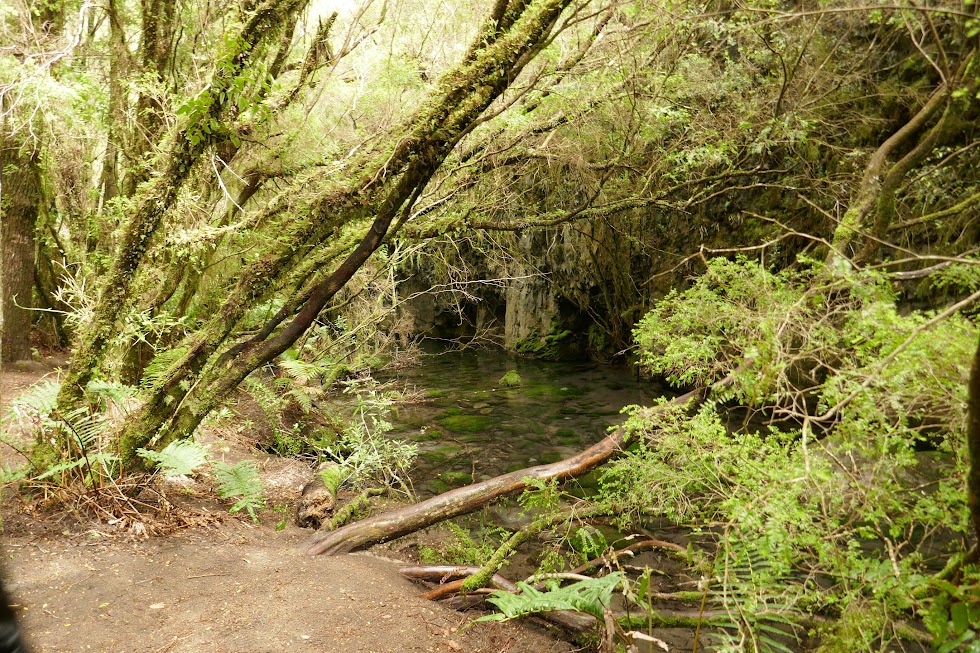 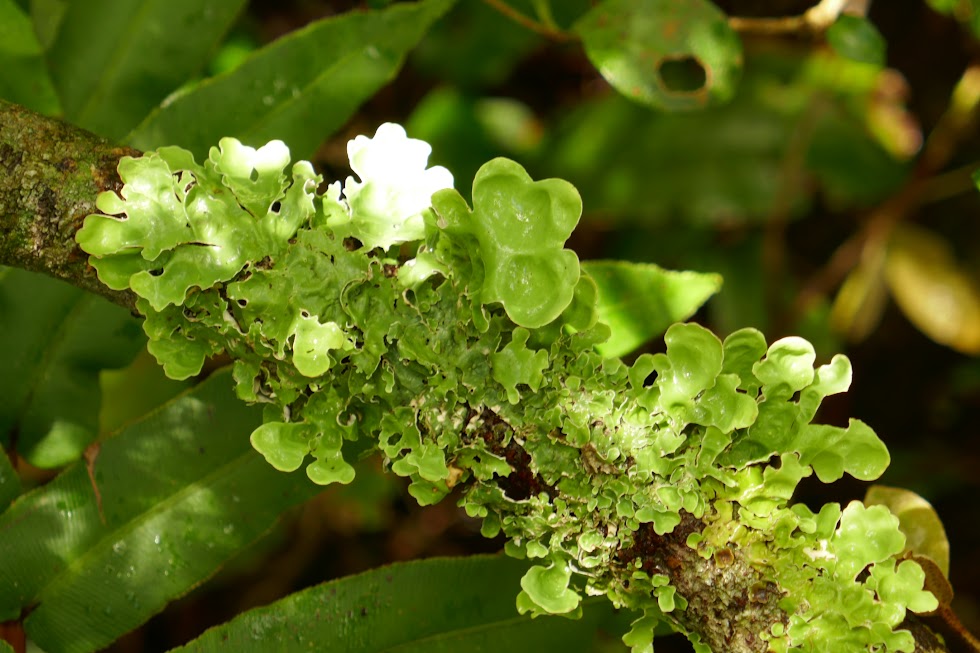 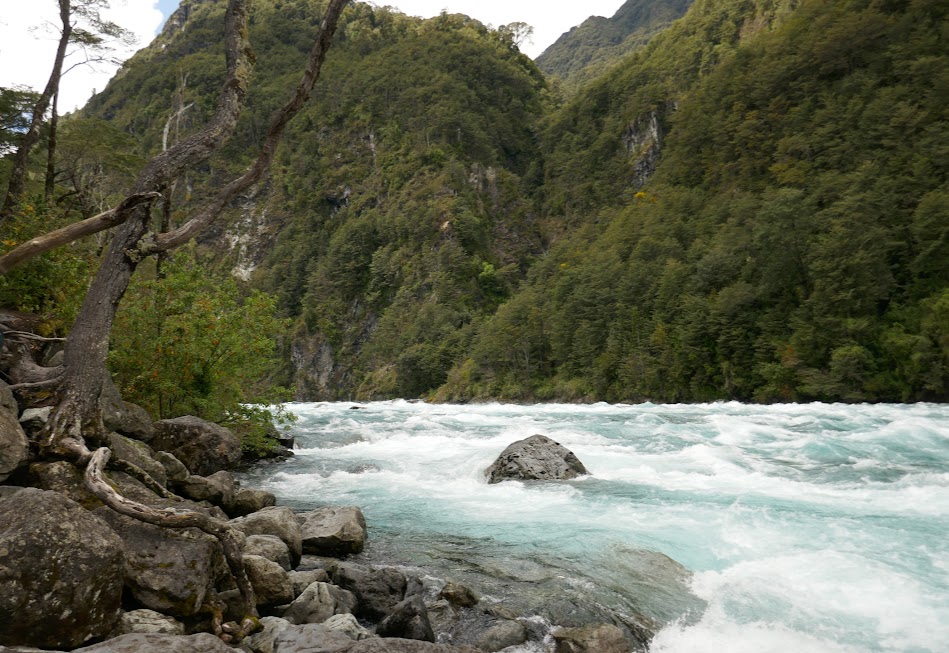 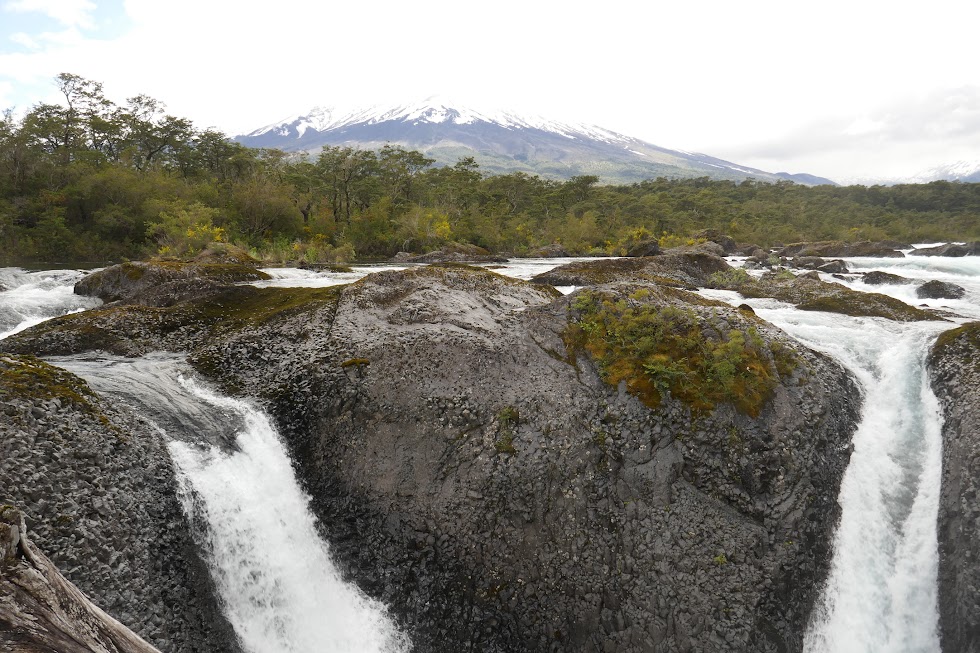 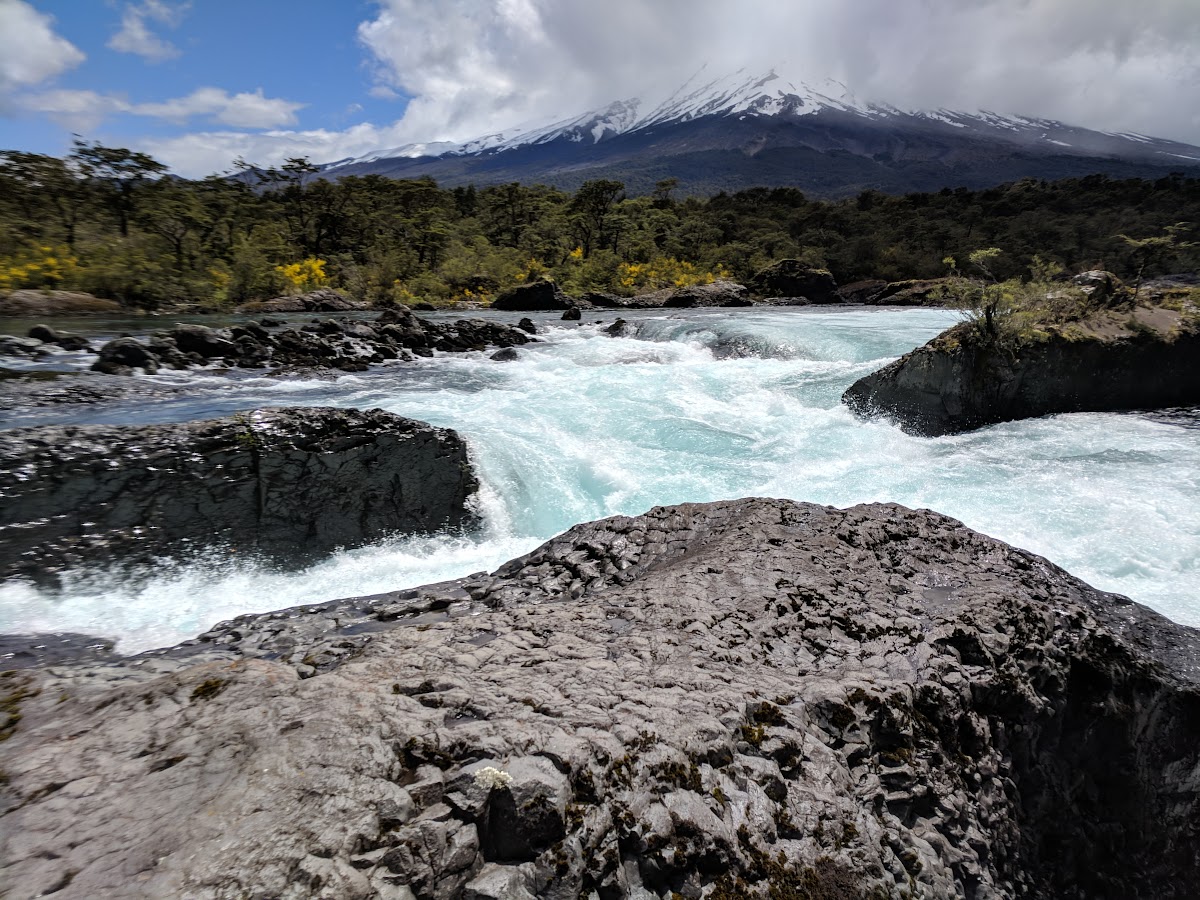 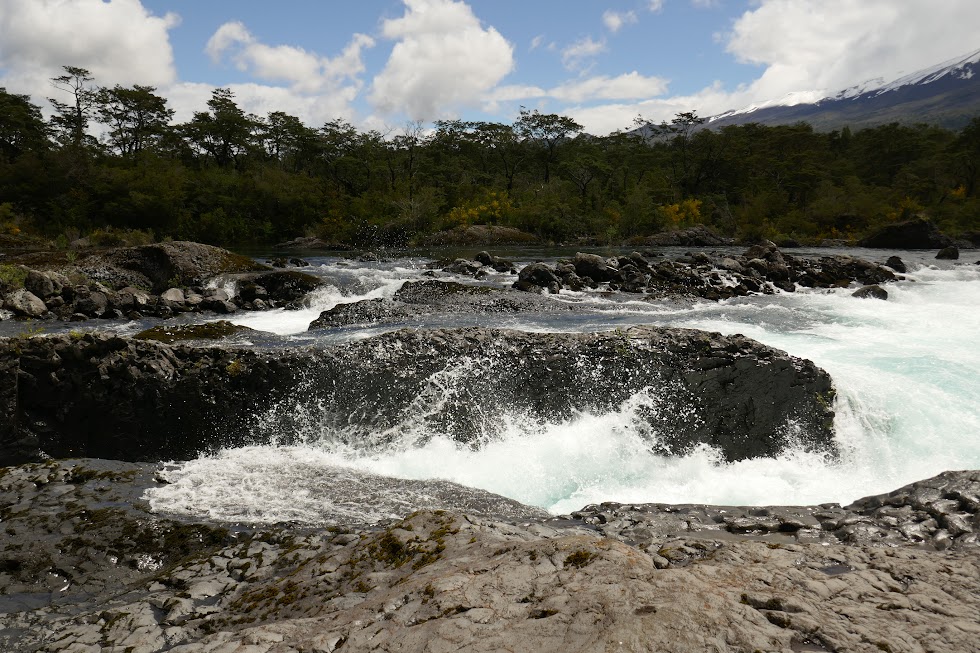 Fun fact #2. In much of Patagonia, cattle are raised without much or any human contact, so they become more or less feral. When they want beef, they go hunting for cows.

Our next stop was at the mouth of the Petrohue River, where it meets the lake. Here we crossed the river on a little boat operated by Alex, who has a house on the other side. His family operates a restaurant out of their home. There we had lunch in a sunny room overlooking Osorno, and after lunch Alex and his wife Rosita and their daughter told us their story.

Alex grew up on that side of the river, and always thought of Osorno as his mountain. He started the story by telling us that it is no longer his. Once every few days he would cross the river to go into town, and then one day about 27 years ago he met Rosita, and he started crossing the river three or four times a day. He was a poor man and had nothing to offer her. So finally, he said, if you marry me and come back to live with me across the river, I will give you the volcano. So she did, and now it’s hers.

Eventually they built the newer house, where we were having lunch. They didn’t get electricity on that side of the river until five years ago, but after they had their two daughters Rosita made Alex buy her a washing machine and hooked it up to a generator. She still cooks with a wood-burning stove.

When the volcano erupted in 2015, Alex sent Rosita and the girls away, but he stayed in the house. A big landslide destroyed the old house and their shed but spared the new house. We could see the rocks all around the house, maybe as close as 50 feet.

After lunch Alex took us back across the river, and then we returned to Puerto Varas. We reconvened in the bar for a lesson on how to make Pisco sours.

Then I went for a little walk, stopped at a food truck and got a sandwich for dinner, and relaxed.

What a great day!