Here’s the highlight of the first day of my Oregon road trip: 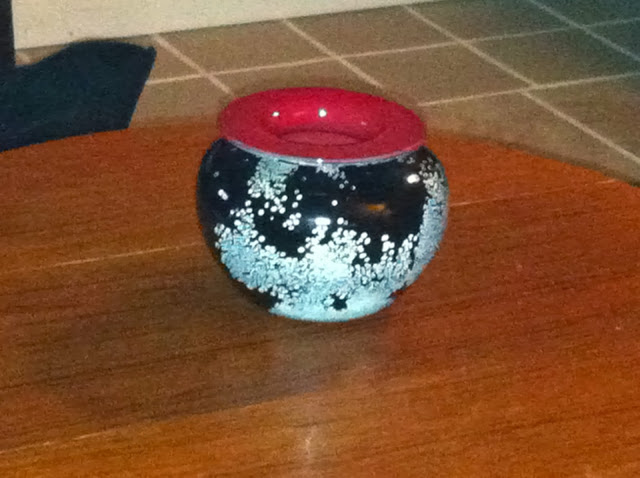 Well maybe it’s not the highlight, but since it cost almost as much as all the other vases in my collection combined, it should be.

More about that later.

I pulled out of my garage right at 8:00 this morning, and after a quick coffee stop, I was on the road. My first stop was South Bend, WA, to stretch my legs. South Bend is right on Willapa Bay, home of some of the best oysters in the Pacific Northwest, but it was too early to indulge. And I guess I wasn’t hungry enough for this one. 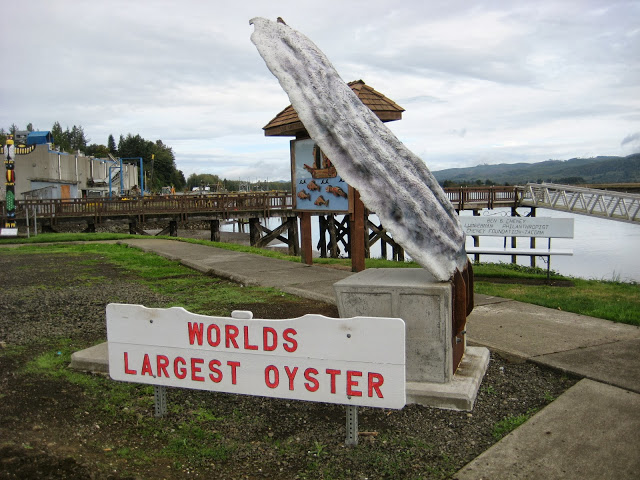 Here are some more pics from South Bend. 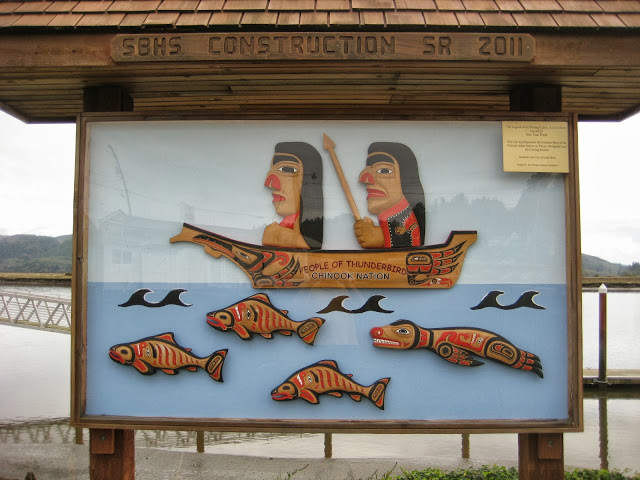 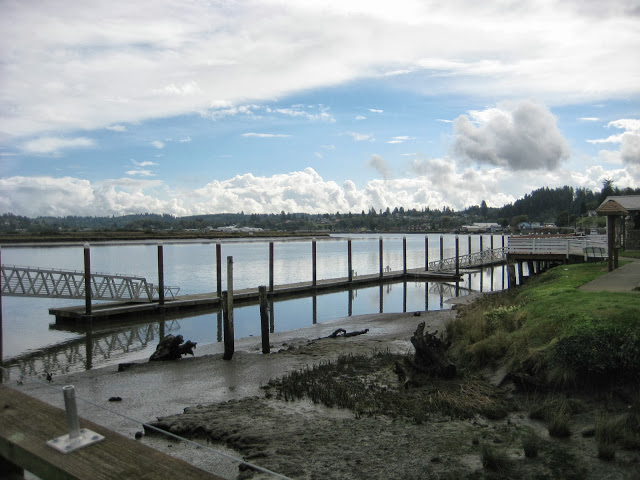 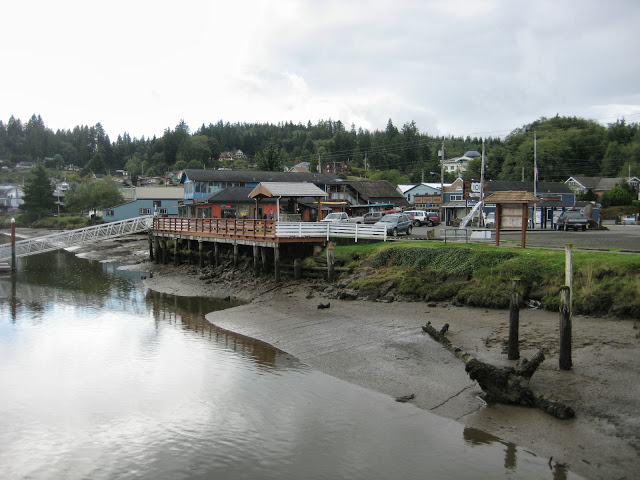 From there it was on to Astoria. I didn’t plan on a long stop, just a quick stop for lunch. But I decided to talk a little walk around town and see some of the charming Victorian houses. 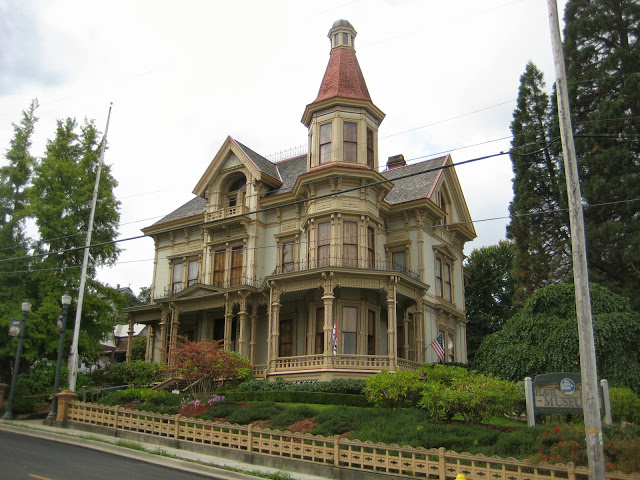 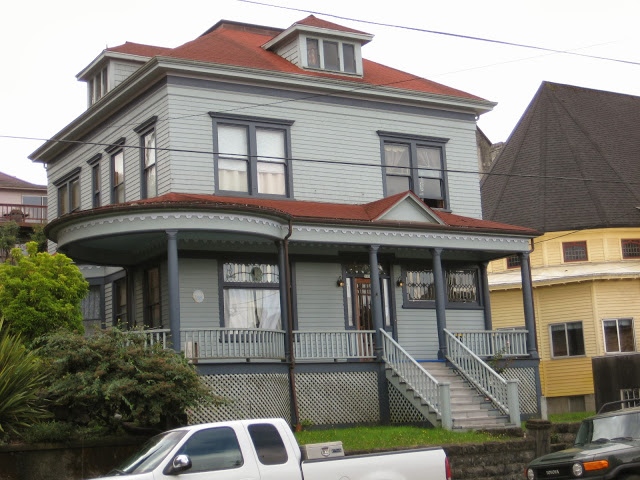 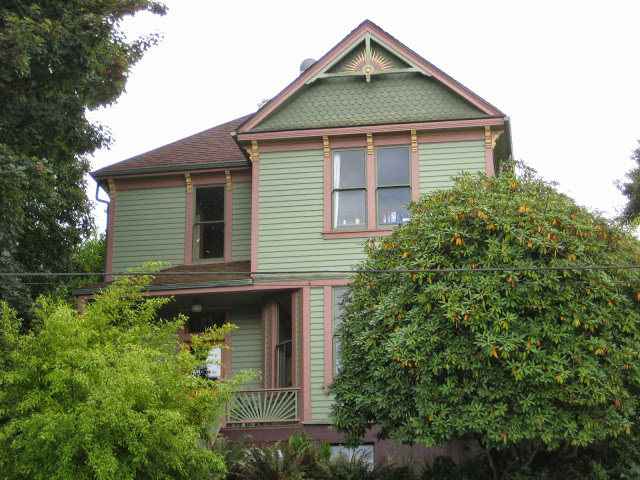 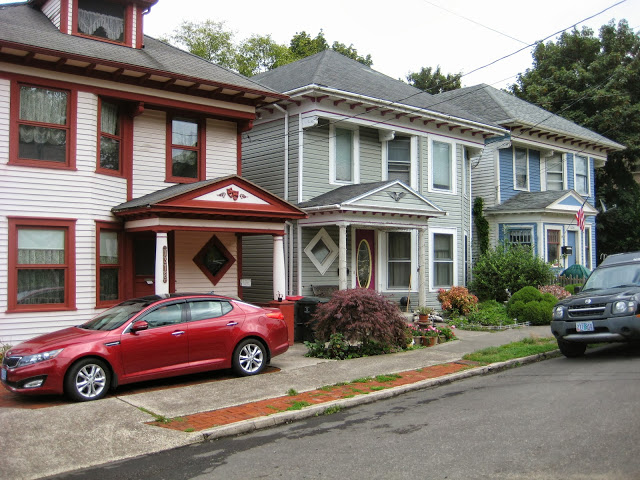 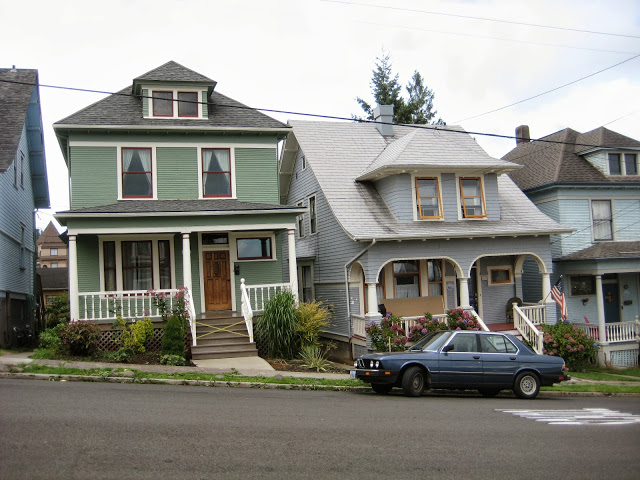 Then I had lunch at The Blue Scorcher and followed that with a walk downtown, where I wandered into the RiverSea Gallery and found the vase I had to have. I explained to the owner that my collection is mostly artifacts, not art, but she was completely unsympathetic. The artist is Kyle Kraiter, an Oregonian, and the vase is called “Cauldron” (yes, it’s named). It’s cased blown glass, which means he blew the inner part first, then coated it with the outer layer. Then, while it was still hot, he rolled it in some substance that gave it the white spots.

Although I had been up to the Astoria Column back about twenty years ago when I took my five-week road trip from Illinois to the Pacific Northwest, I decided to go back up for another look. It was worth it. The column has been renovated since I saw it last, and the views are spectacular and … well, I was going to say memorable, but I couldn’t really remember the view from the last time I was there. 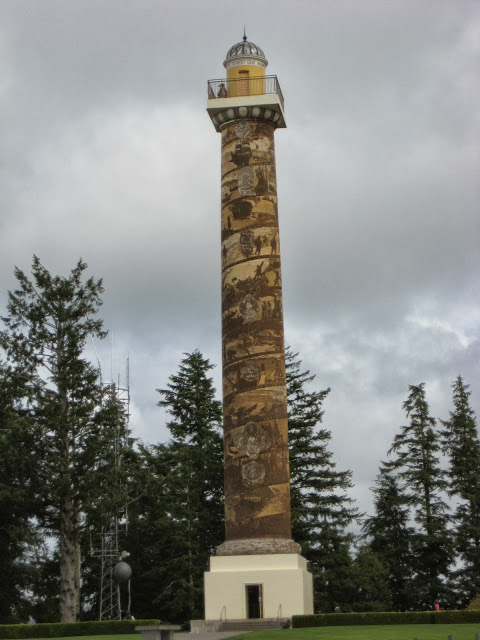 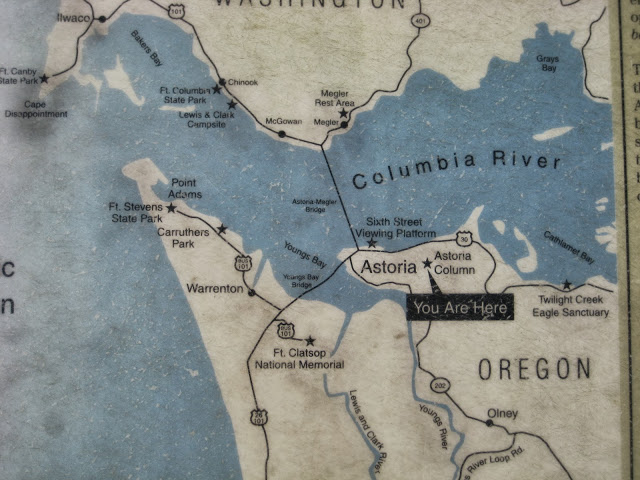 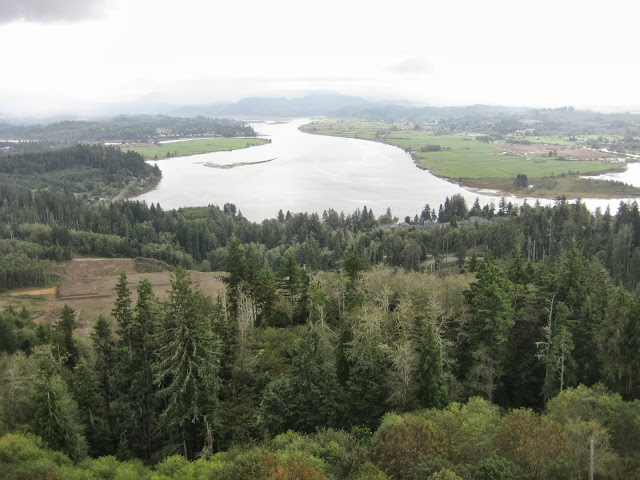 By the time I got out of Astoria, it was 2:00 p.m. It was supposed to be a rainy day, and I did hit some rain on the drive through southwestern Washington, but now the sun was out. So I decided to detour up to the very northwestern corner of Oregon: Fort Stevens State Park. At the mouth of the Columbia River, it was filled with great scenery, and I wished I had more time to explore. 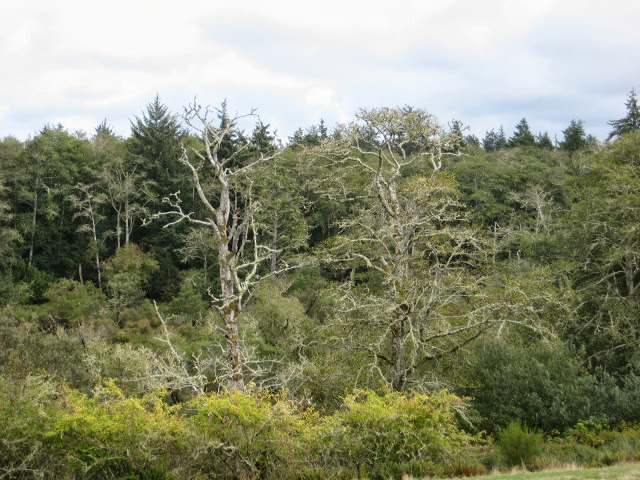 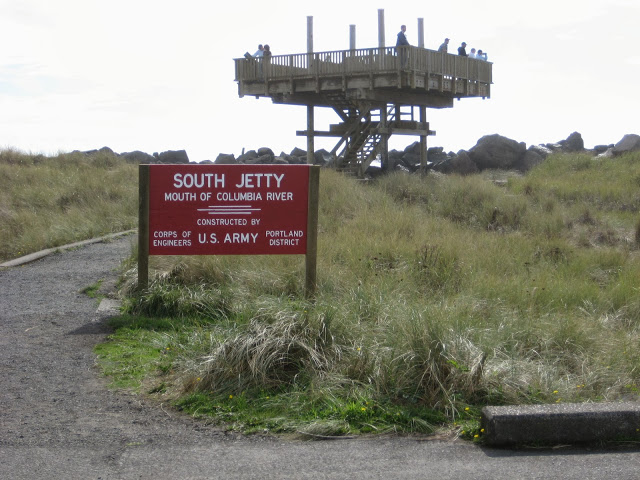 I left Fort Stevens at about 3:45, and was surprised to see how close I was to Seaside; fifteen minutes later, I was there. It’s got a nice beach, but the town is filled with cheap souvenir shops and eateries. 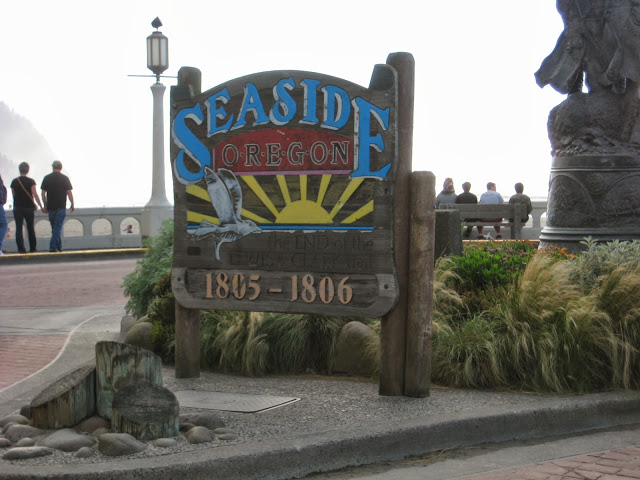 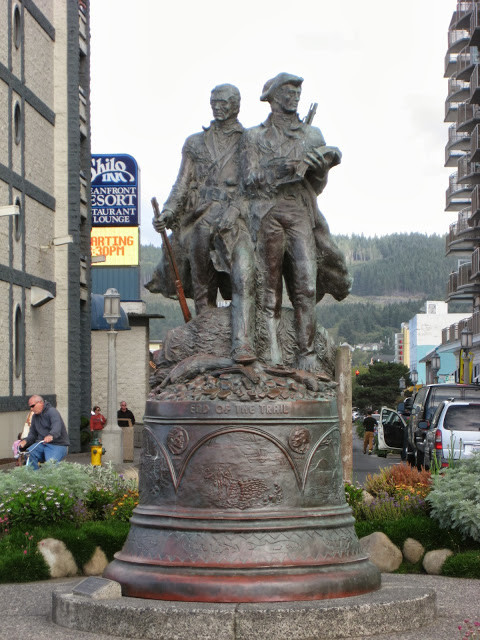 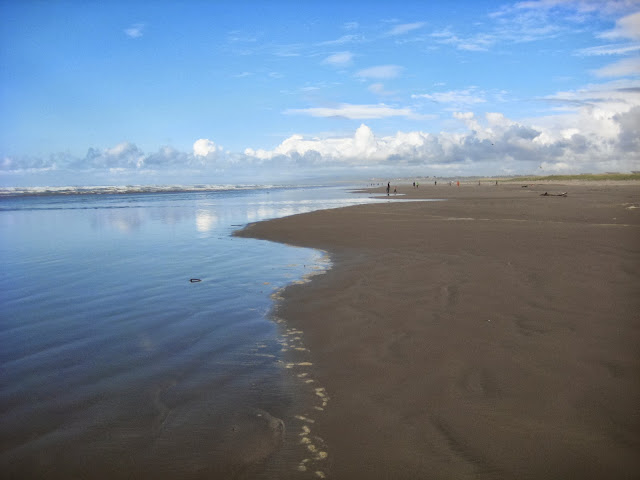 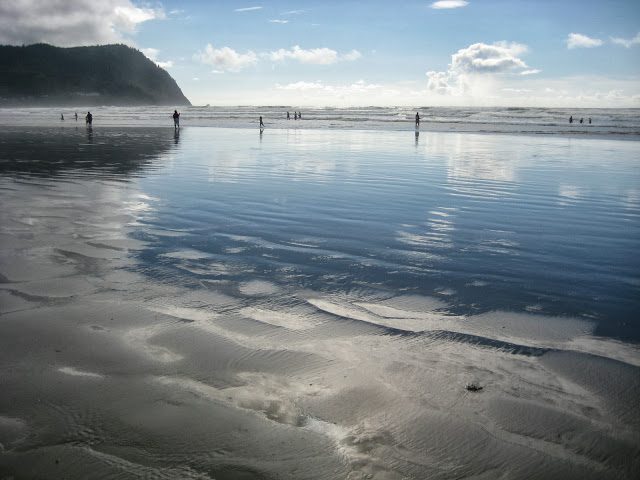 From there it was another twenty minutes to my home for the next two nights, just a couple of miles south of Cannon Beach. After I got settled in, I went back to Cannon Beach to enjoy the sunset and get dinner. And I got lots of pictures of the Haystack and the tide pools around it. 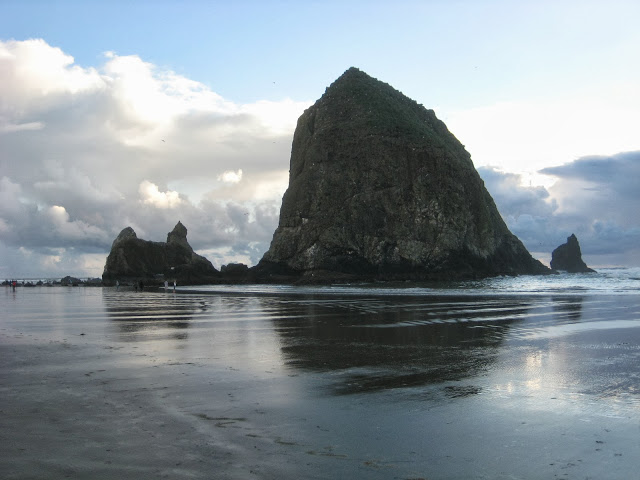 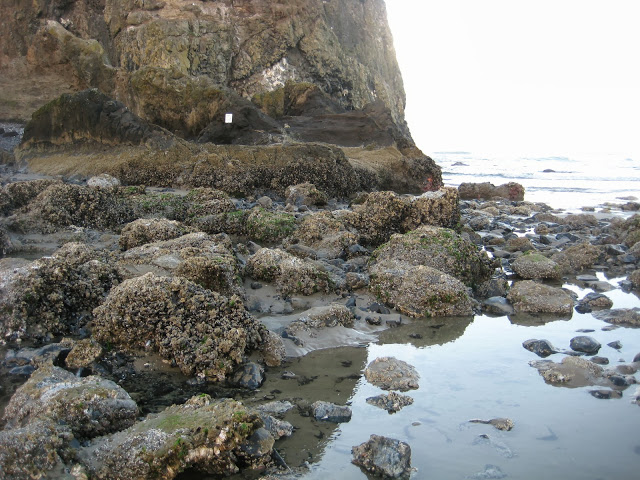 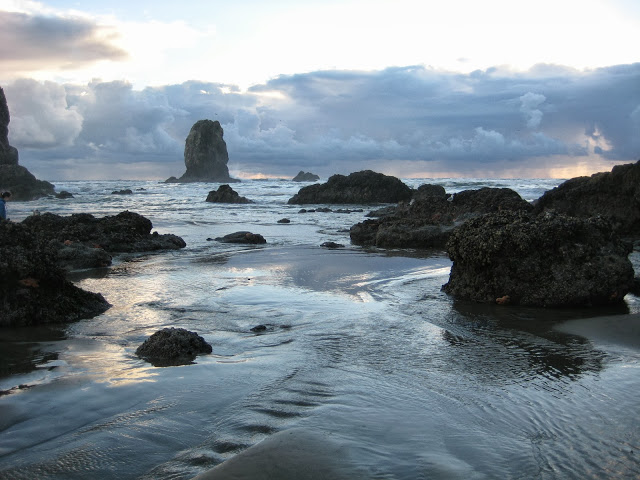 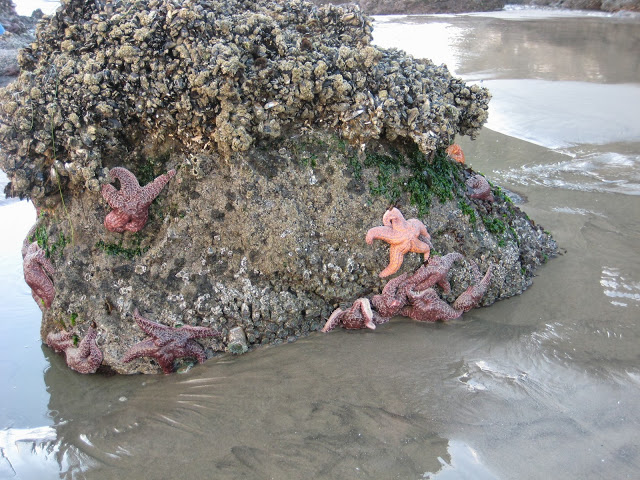 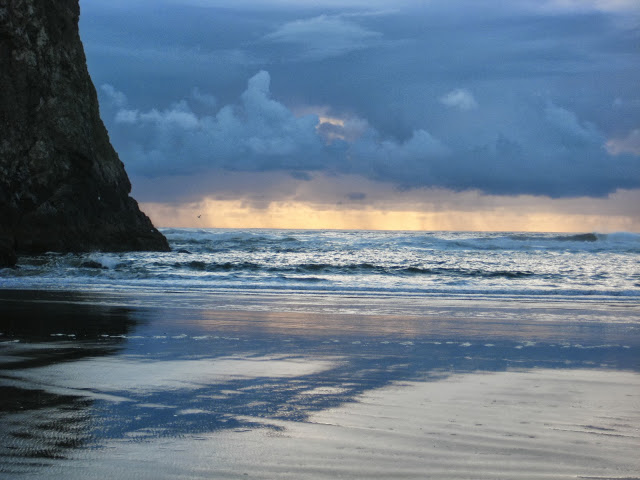 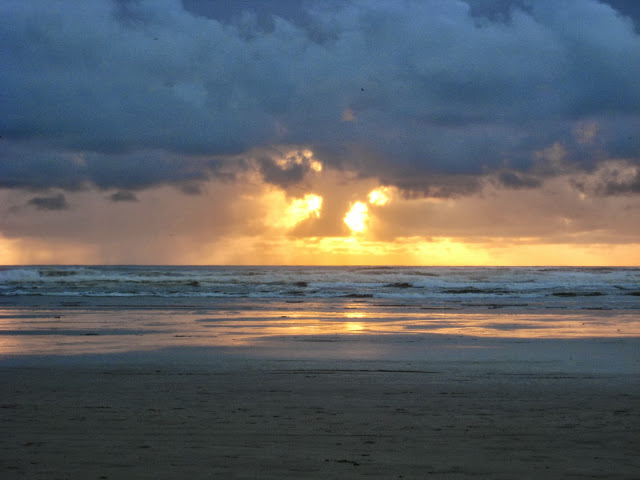 So yeah, this was the real highlight of my day.

Just as the sun went down, a little after 7:00, it started to rain and I started to fade. So I decided to return to my “home” and eat the PBJ sandwich I’d packed for the car and get this first blog post done. Shortly after I got back here, the rain started coming down hard, so my timing was perfect.

Tomorrow I’m going to visit Ecola State Park and do a serious hike, and then explore more of Cannon Beach. Hope it doesn’t rain!