I want to start this post with a few random observations.

During breakfast today (another fabulous farm breakfast, this time with Dutch Babies and bacon), word came that a neighbor killed a cougar that had been terrorizing the area. I learned that things have gotten out of balance, and there are too many cougars in the area, which is causing the deer population to go down and costing the ranchers cattle. So everyone was glad that this cougar had been killed. The neighbor came by and had the dead animal with him, already skinned. (I actually don’t know why it was skinned.) Apparently it weighed 178 pounds, which is very large for a cougar. Everyone at breakfast (myself included) went out to have a look-see. If you want a look-see too, scroll down to the bottom of this post; otherwise, I’ll give you warning when to scroll no further.

I really enjoyed my stay at Wilson Ranches Retreat, though I think I’d have enjoyed it more outside hunting season. Most everyone else was there to get their deer. Since all the land is private, hunting is only allowed by permission of the owners. Apparently the Wilson’s allow a limited number of guests to hunt on their land. (I assume they pay for that privilege.) And because it’s hunting season, I didn’t get to have a tour of the ranch on horseback, which I would have liked. I know next to nothing about the cattle ranching business, and it would be interesting to learn.

There was one fellow staying there who was glued to the TV to catch up on the news. Guess which “news” channel he was watching.

But no one discussed politics, thank goodness. The government shutdown was a topic of conversation, but only insofar as we all agreed it was ridiculous. And I became a hero of sorts when they learned that I’d “broken in” to the parks in the area.

After breakfast I headed out of Fossil the way I came in for the first 20 miles or so. I did not expect my first view of Mt. Hood to appear so soon. (See above about reverse direction. I hadn’t seen Mt. Hood out the rearview mirror on the way to Fossil.) 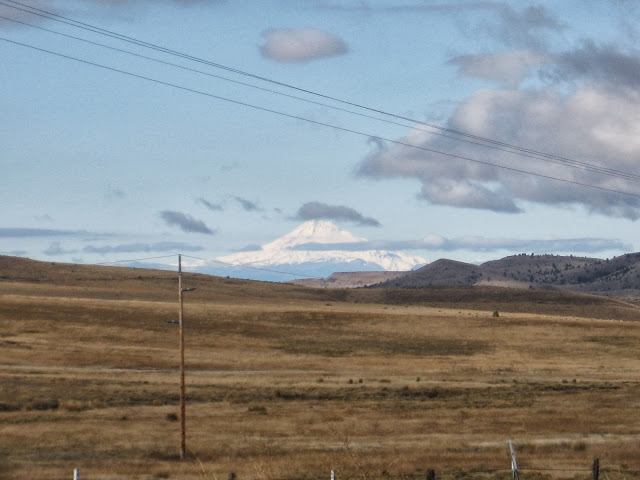 As I drove west I had Mt. Hood more or less right in front of me and Mt. Adams just off to the right, striving for grandeur that Mt. Hood comes by naturally.

Then I turned off and came to the little town of Shaniko. It reminded me of Sisters, except without the artifice. Sisters looks like a modern-day town dressed up in old western garb; Shaniko looks like an old western town that hasn’t changed. 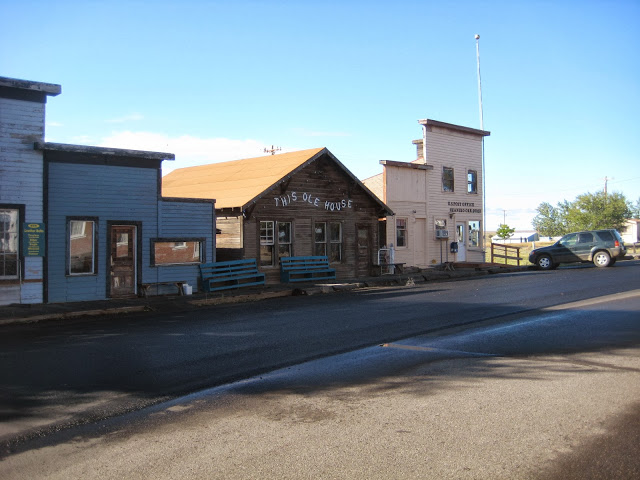 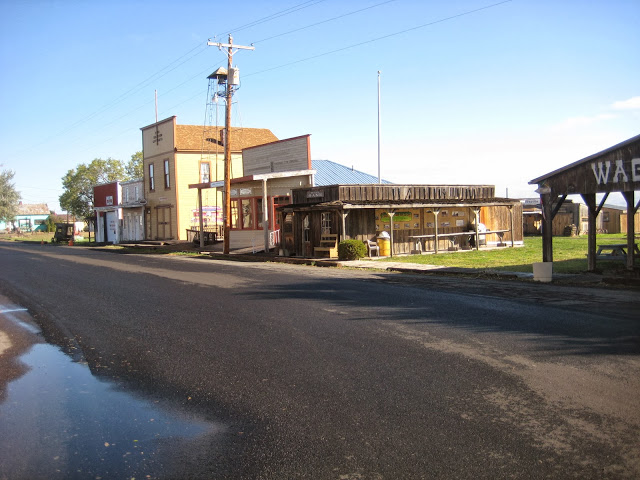 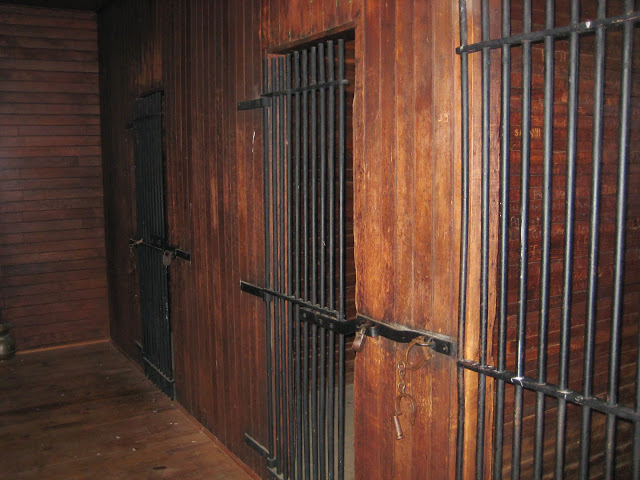 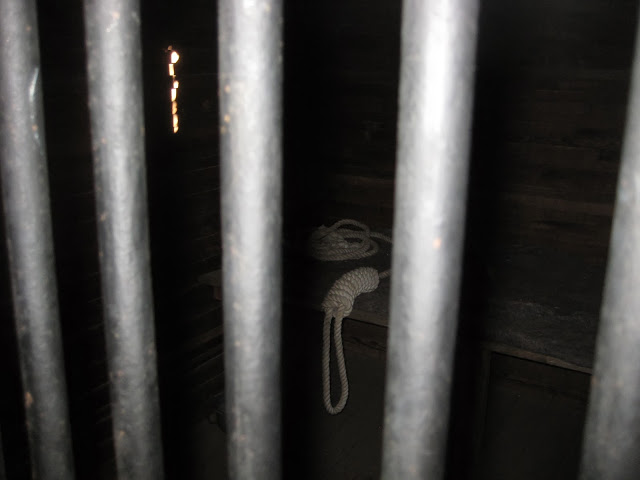 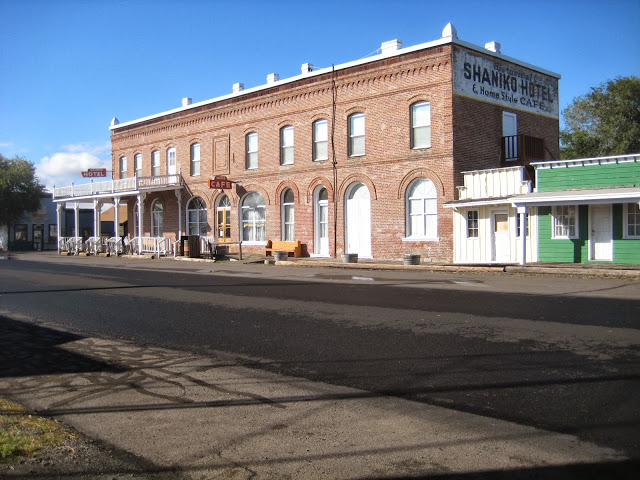 From Shaniko I headed toward Maupin, and I did a loop that took me about nine miles north to White River Falls, across the Deschutes River via a rickety old bridge, and back to Maupin along the side of the river, where a lot of people were out fishing. White River Falls is a small state park with a path leading down to a view of the falls and to an old abandoned hydroelectric plant. 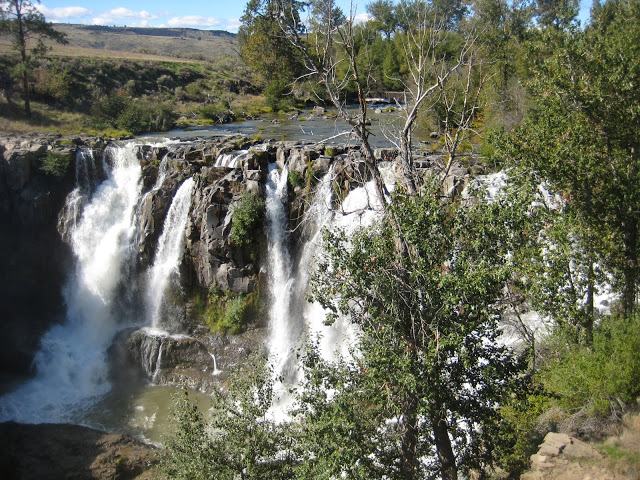 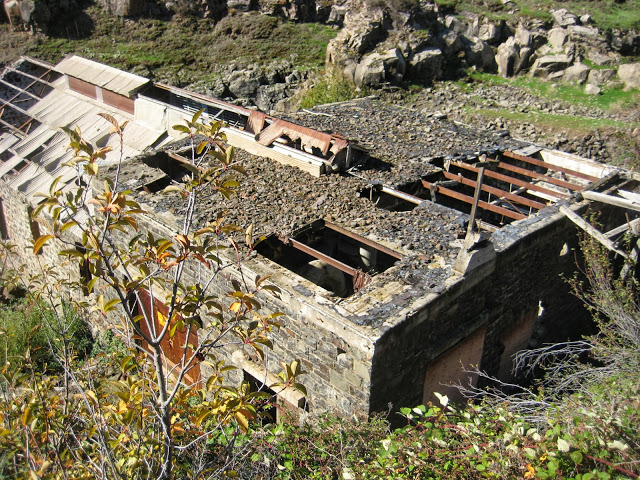 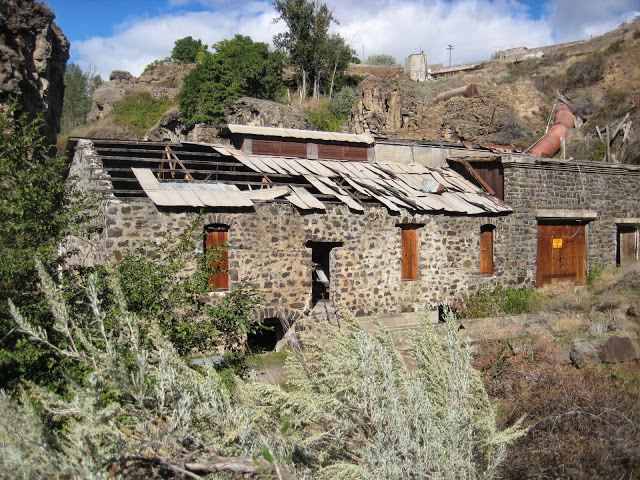 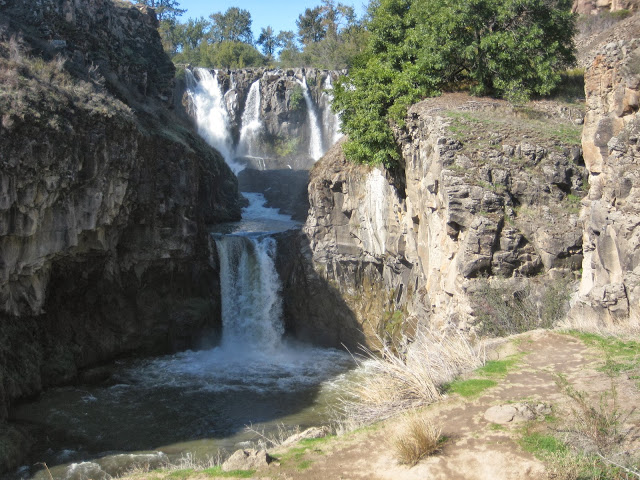 From Maupin I headed west. Soon I came to a town called Pine Grove. When I got there, I thought, “What an aptly named town!” The road from Maupin went through flat grasslands and some rolling hills, but Pine Grove was in a grove of pine trees.

This grove turned out to be the Mt. Hood National Forest. For the next hour I drove through a forest of pines. As I neared the mountain, the skies greyed, but then turning north, the sun reappeared. I stopped at Panorama Point for a panoramic view of a certain mountain.

I got to Hood River a little before 3:00, and enjoyed wandering around the attractive downtown area. Then I walked over to the Marina Park hoping to watch some parasailing (my guide book indicated that this was a prime location). But all the parasailers were at a different park, so my views of them were from a great distance. I walked back downtown and stopped in a winery for a tasting, but I found the four wines I tasted to be non-descript, so I left empty handed.

I’m staying across the Columbia River on the Washington side, about six miles from Hood River, in a charming cabin behind the owners’ house. I have a great view. 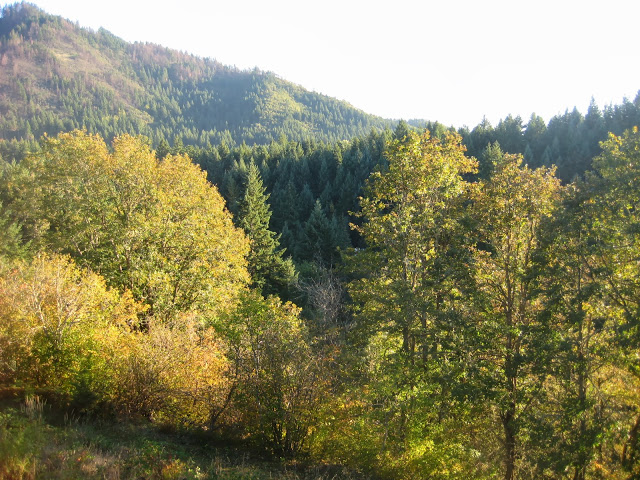 After I got settled, I went back to Hood River for a yummy dinner at Brian’s Pourhouse, which was recommended by the Wilson’s daughter. It was a great recommendation.

Now I’m back in my cabin, where there’s no wifi, so I will not post this until morning.

And now, here’s the picture of the dead cougar. 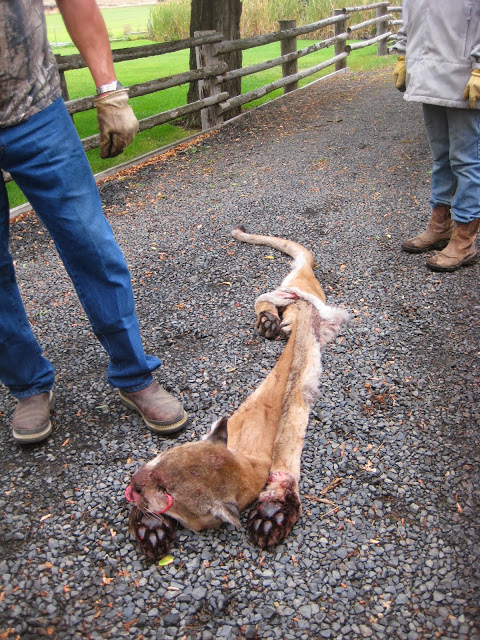