With just three nights in Guanajuato, I didn’t blog while I was there. So instead I’m offering this overview and review.

This was my second tour with Charter Club. On my Cuba trip in February 2020 we had a tour guide/escort who spent the entire time with us. But on this trip, Rosie and Carlos (mostly Rosie), the owners of Charter Club, were our guides.

The other challenge on guided tours is pacing, and here I felt this tour fell short. We had four group outings. One was a walking tour, and the others combined walking with some time in the van. The walking tour was very long and offered no opportunity for a snack break. We got to sit down only briefly at a few of the places where we stopped. I think a good walking tour should include some time for a coffee break where the guide can provide narration about history, culture, and traditions that are not specific to a particular site.

(Read about two of my all-time favorite walking tours here and here.)

We also had a lot of free time, but almost no suggestions on what to do with it. I walked around a lot more, but I would have liked to get a list of other museums and sites worth visiting. We also got some tips on restaurants near our hotel, but it would have been helpful to get a list with information about types of cuisine and price ranges.

We visited these museums:

This 17th-century house was built by Gabriel de Barrera, a silver-mining tycoon. It housed his family and some mining operations. The Guanajuato state government acquired it in the 1970s and converted it into a museum with period furnishings.

The gardens were the real highlight. Each area of the property is a themed garden: English, Japanese, Mexican, Roman, and others.

Click the arrows or little circles to cycle through a sampling of photos from this museum. 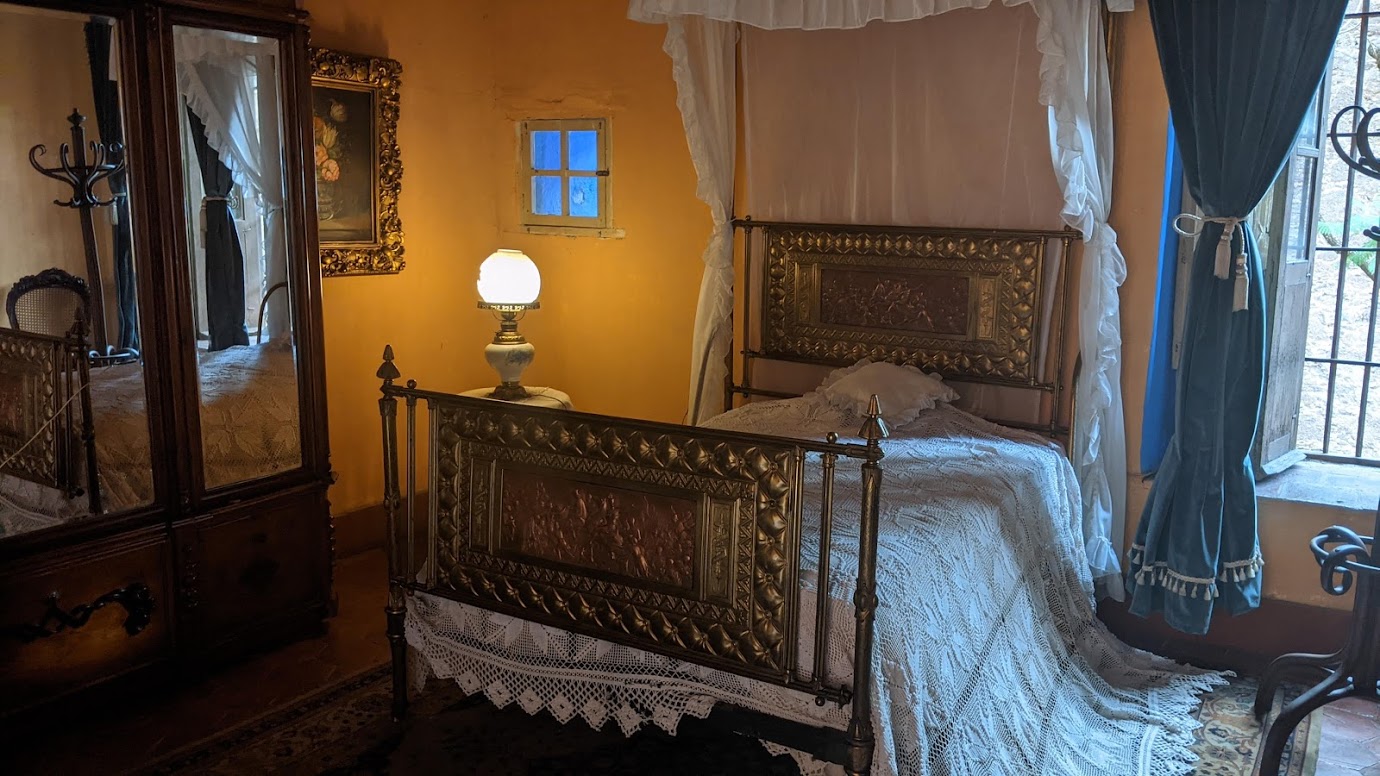 A bedroom inside the house 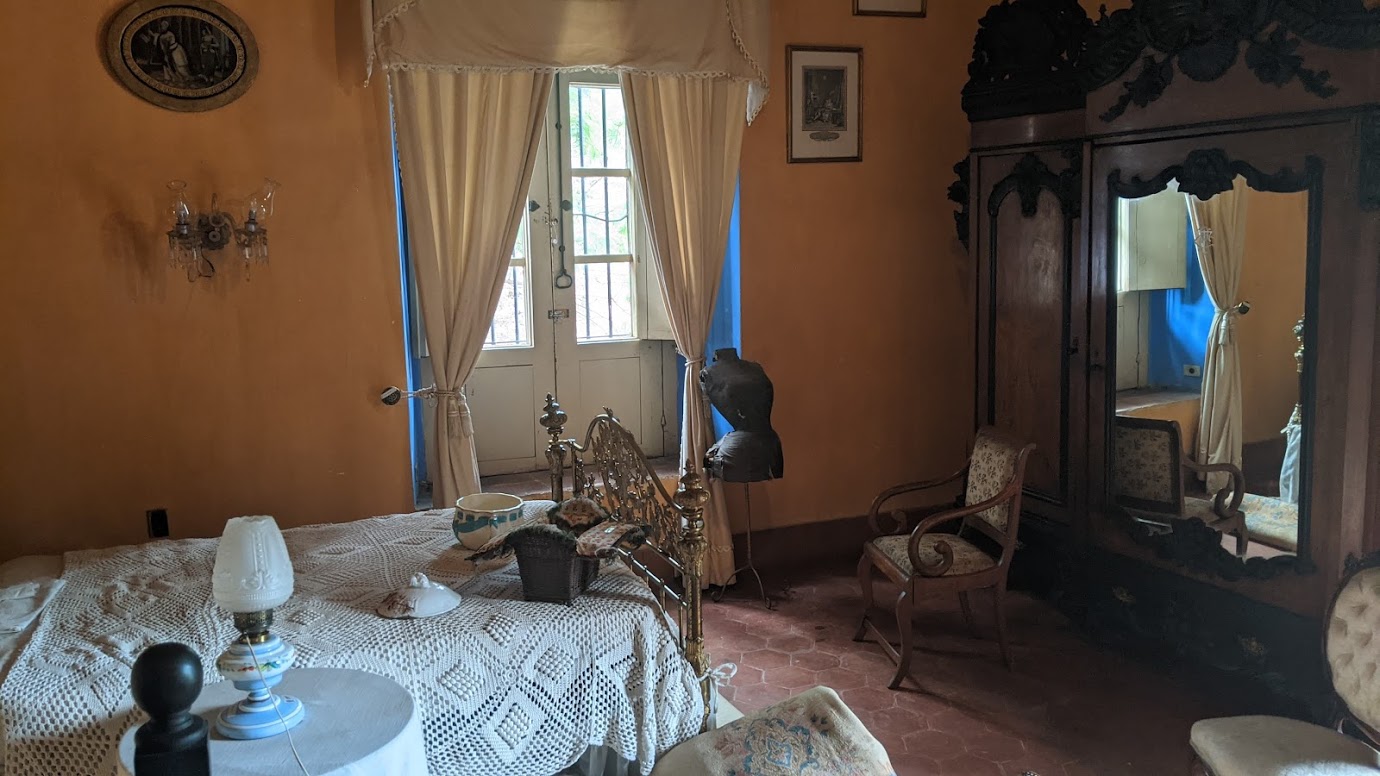 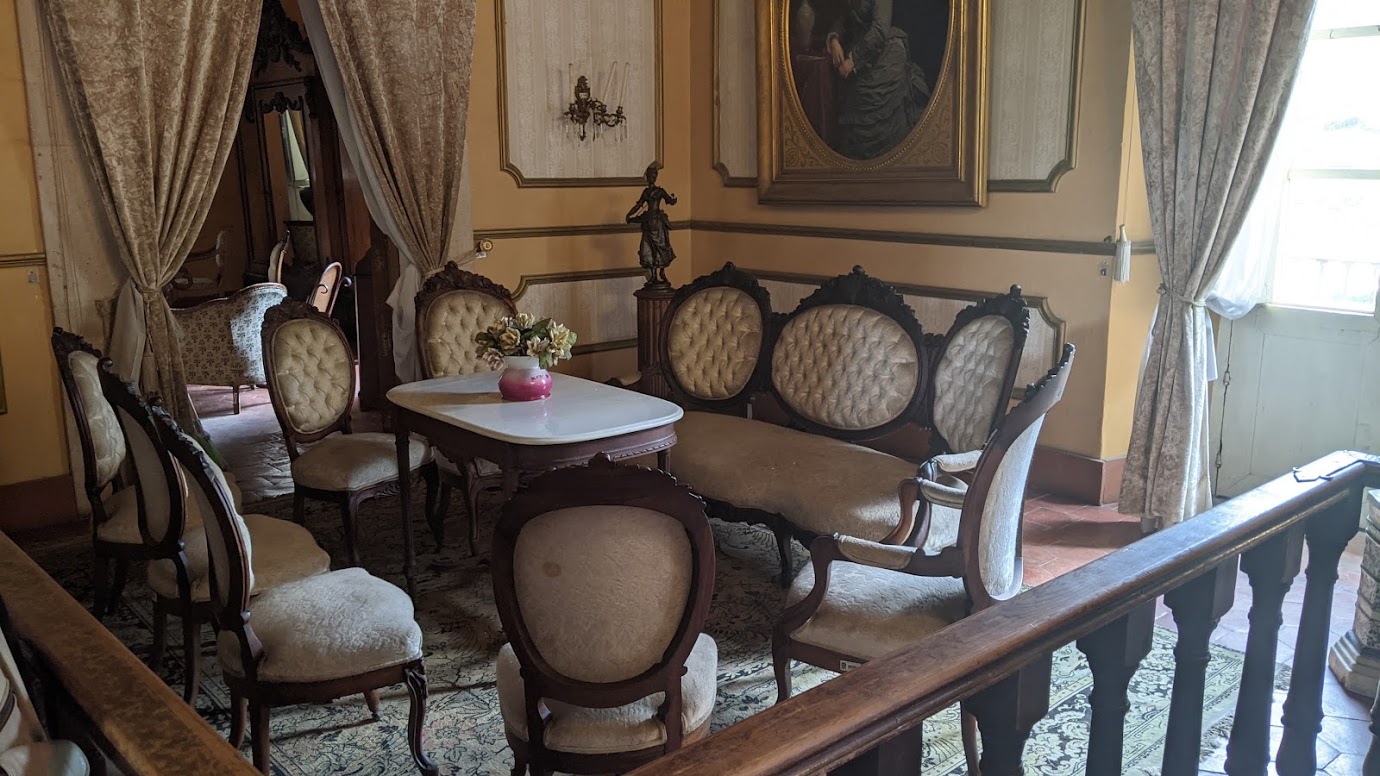 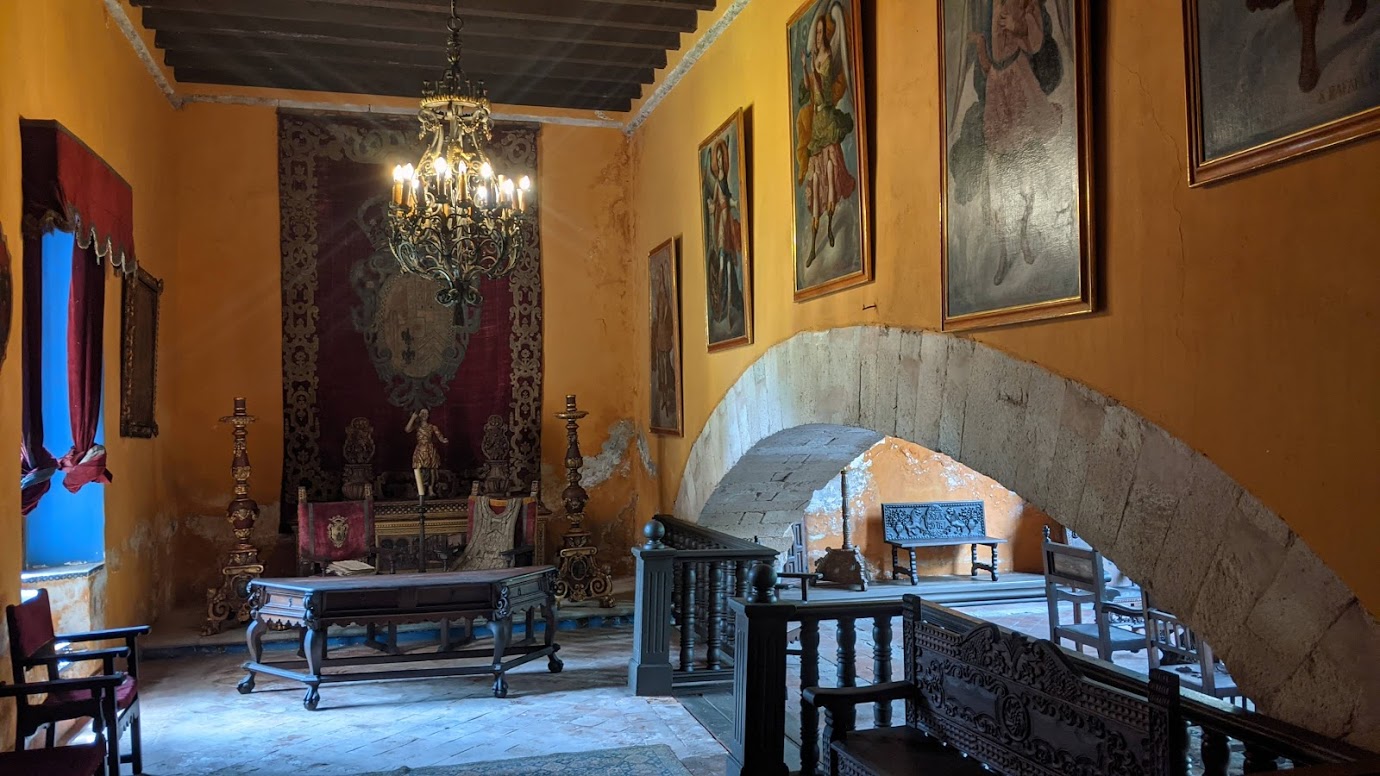 Not sure what this room is 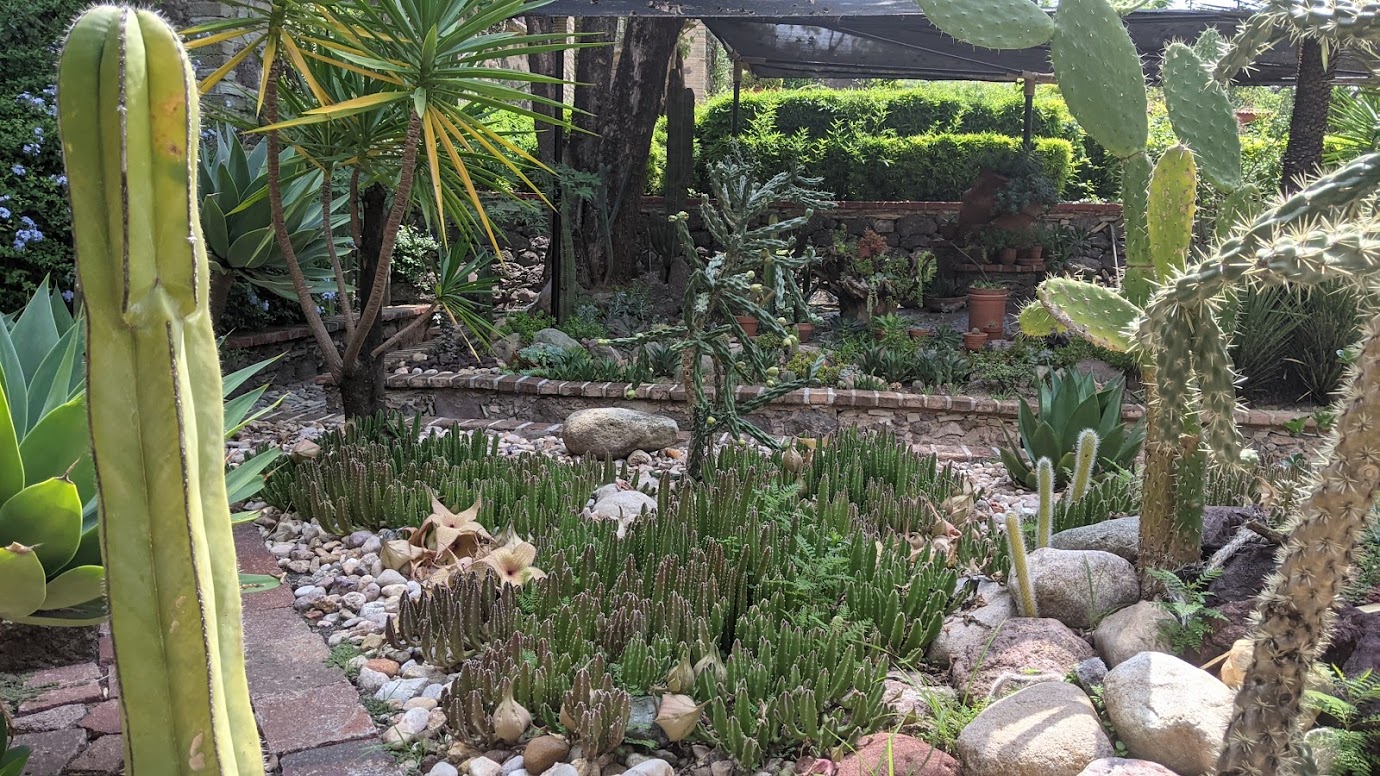 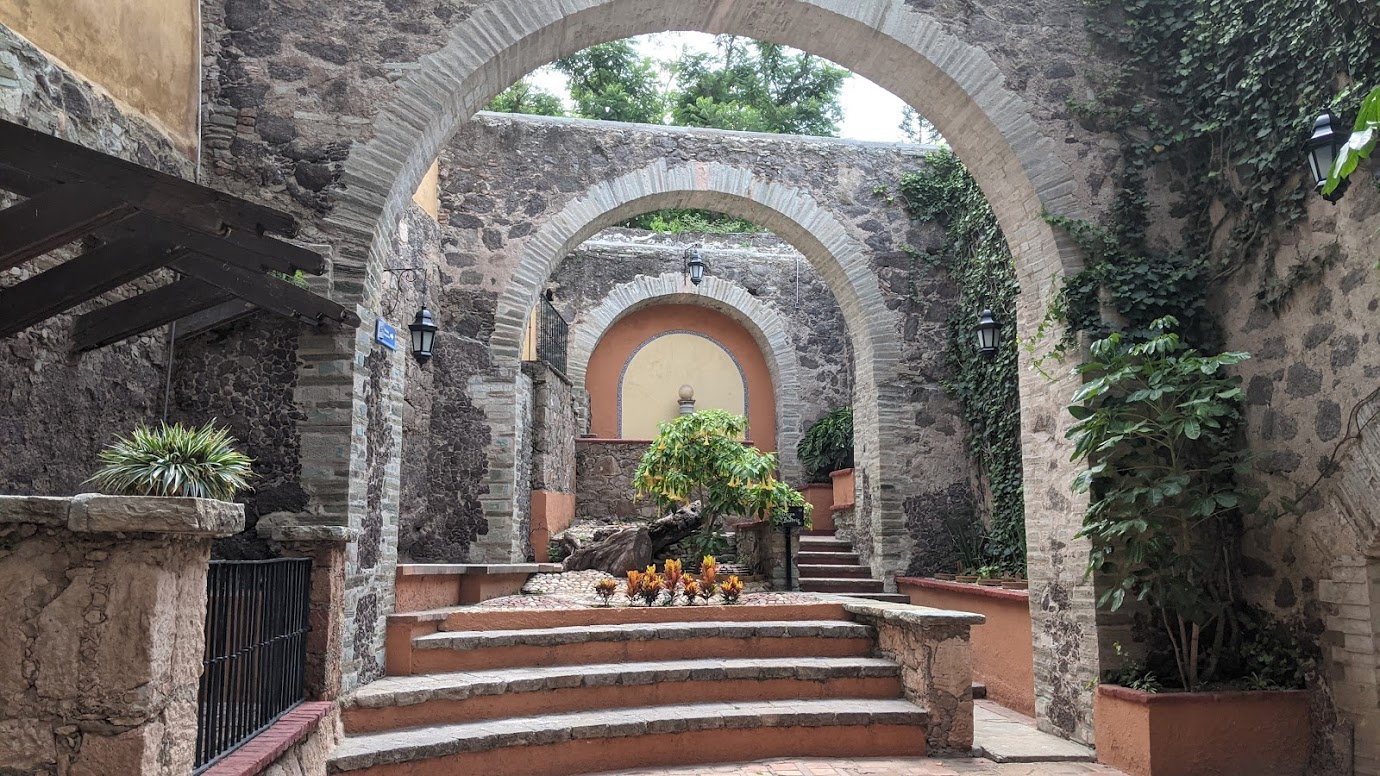 Another area of the garden 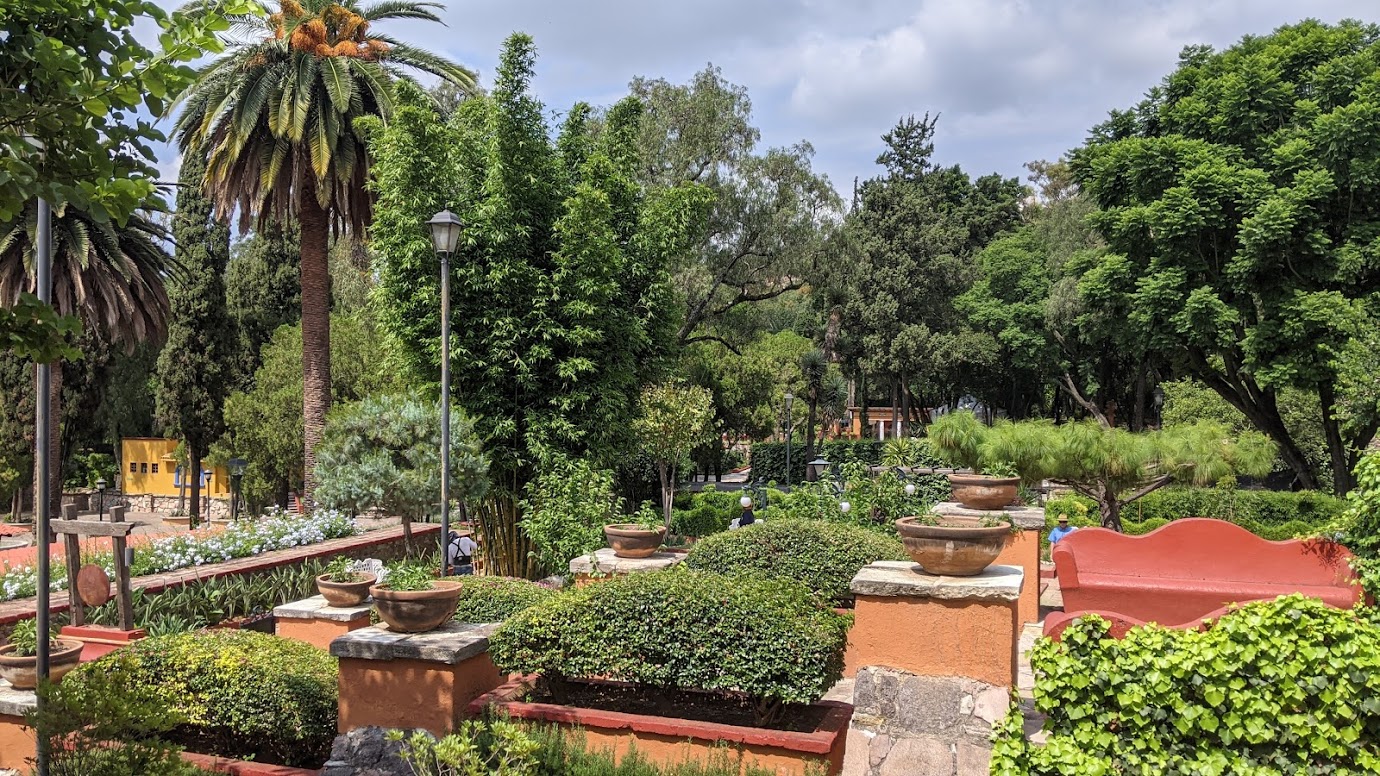 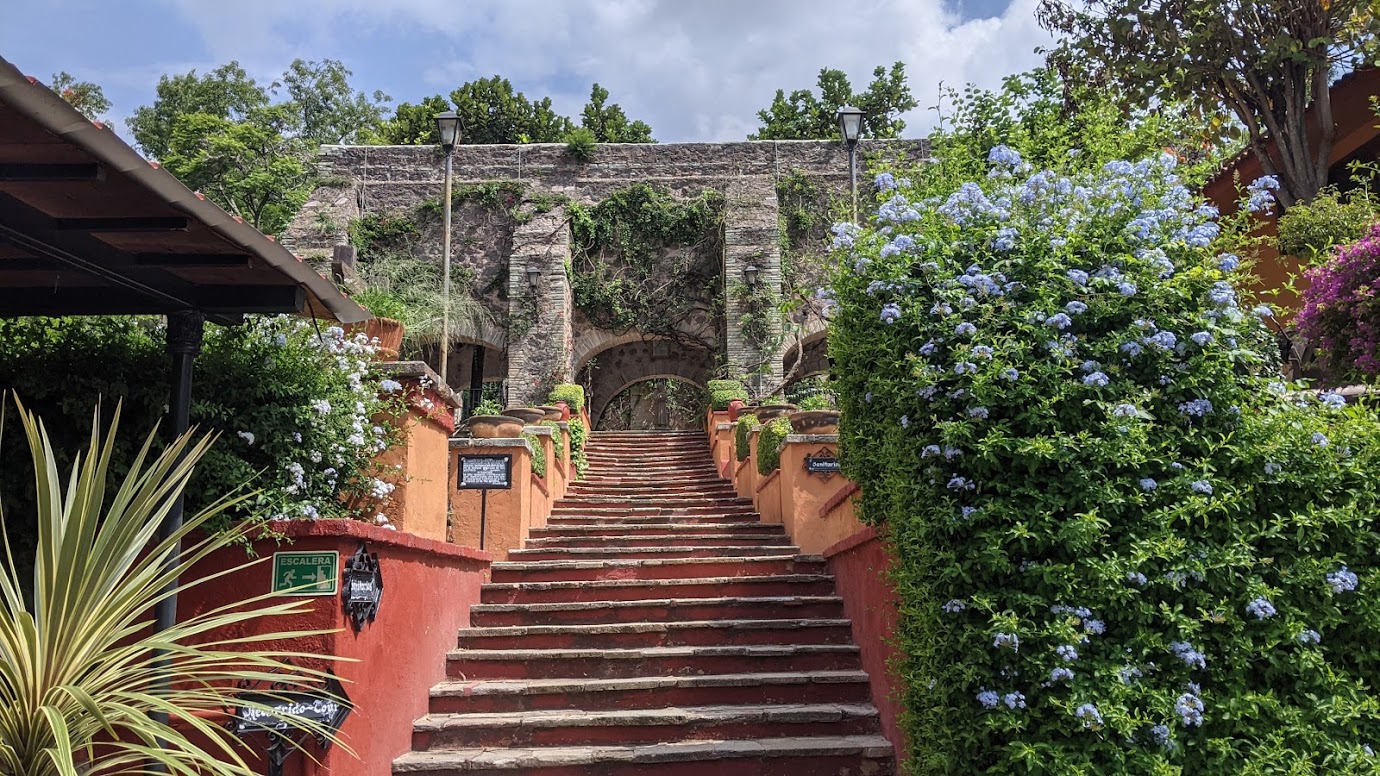 Another area of the garden

In the 1950s a professor at the University of Guanajuato began what eventually grew into the Festival Internacional Cervantino. Every fall, 49 venues across the city are used to present entertainment celebrating Miguel de Cervantes and his most famous character, Don Quixote. Sculptures of Don Quixote can be found all over the historic center of Guanajuato.

Eulalio Ferrer, a Spanish-Mexican entrepreneur, had built a substantial collection of art related to Don Quixote. As a teenager he fought on the side of the Socialists in the Spanish Civil War, but when the Nationalists took power, he fled to France. He spent some time in a refugee camp there before coming to Mexico, and the story goes that while there, he traded his only possession, a pack of cigarettes, for a miniature edition of Don Quixote de la Mancha. That was the start of his collection, which form the basis for the museum’s exhibits. He donated to the city of Guanajuato, and the museum opened in 1987.

I didn’t expect to love this museum as much as I did. The work on exhibit is stunning. Here’s a sampling. More are in my Guanajuato photo album and at the museum website. I don’t know anything about the artists, unfortunately. (Click on each photo to view them.)

The Museum of the Mummies of Guanajuato is not your typical museum, as is obvious from the name.

The story of the mummies is partly gruesome. Because of a cholera outbreak in the 1830s, there were a lot of burials, any it was necessary to perform burials quickly. Starting in the 1870s, the city imposed a tax requiring payment for perpetual burial. When the tax was unpaid, bodies were disinterred and stored in a building near the cemetery in case the families claimed them and paid the tax so they could be reburied.

The workers who disinterred the bodies were surprised to discover that many of them were well-preserved and mummified. The dry climate of Guanajuato led to a natural mummification. Early in the 20th century, people heard about the mummies and wanted to see them, so the cemetery workers started charging an admission fee. The museum formally opened in 1969. There are a total of 111 mummies in the collection.

It’s definitely a fascinating experience to see these mummies. Many have what appear to be expressions of horror on their faces, but that’s mainly caused by the postmortem process. (So we were told.) We did see one mummy that was definitely buried alive; when she was disinterred, she was upside down, biting her arm, with blood in her mouth.

Diego Rivera was born in Guanajuato, and this museum at the house where he lived for the first few years of his life. In my opinion, it was completely skippable. There are a few samples of Rivera’s early work, some works by other artists, and the house is furnished in typical style of the period. There was nothing remarkable.

Built between 1798 and 1809, this building served as a granary for a just a few months before it played an important role in Mexican history. When Hidalgo led his rebel forces against Guanajuato in September 1810, the wealthy Spanish residents took refuge here. The insurgents burned down the door on the east side of the granary, stormed the building, and massacred everyone inside.

The building is now a history museum. I love history, but I’m not a fan of museums that exhibit historical artifacts. Rosie gave us some context, but I was more interested in the history of the place than the exhibits.

This beautiful triangular plaza filled with ficus trees is a major gathering space in Guanajuato, especially at night. Mariachi bands, vendors, and other entertainers abound here, and many cafés and restaurants encircle the space. (Our hotel was located here.) Even in the midst of a pandemic, the plaza was teeming with locals and tourists alike. Most people were good about wearing masks.

And here are a few videos I captured of people having fun here.

The largest vein of silver ever discovered in Mexico was found on this hillside overlooking the city of Guanajuato. The first mine opened here in 1558, but it was soon thought to be exhausted and was shut down. In 1760 Antonio de Ordóñez y Alcocer resumed mining here and soon discovered the mother lode. He paid for the construction of the San Cayetano Church, named for his patron saint. The church, completed in 1788, is famous for its ornate altarpieces, covered completely in gold leaf.

There’s also a view of Guanajuato from up here, but it’s not nearly as impressive as the view from the foot of the monument to El Pípila.

When the insurgents decided to burn down the door to the alhóndiga in 1810, the man they sent to do the job was Juan José de los Reyes Martínez Amaro, whose nickname was El Pípila. Erected in 1939 on a hill overlooking the city, the views from the base of the statue are impressive.

Our itinerary said we would enjoy the sunset from up here on our first night in Guanajuato, but we came too early (or sunset was too late). We took the funicular back down the hill while the sun still shone. I would have enjoyed even a half hour up here before heading down. The next afternoon I walked up here again just to get some exercise and have a little more time to appreciate the view. I walked up a long route along a not-too-steep road where I got to enjoy some different views. And I walked down the steeper steps, where I encountered a gorgeous mural.

This beautiful theatre, facing on the Jardin de la Unión, opened in 1903. We toured the interior during our walking tour on our first morning. But the exterior is really special. One of the videos above starts out in front of the theatre.

Built at the end of the 17th century, this church became a Basilica in 1957. Inside is a carved wooden image of the Virgin Mary, gifted to the mining town of Guanajuato in 1557 by King Philip II of Spain. Supposedly it dates from earlier than the 8th century. After the Moors captured Granada in 714, the local Catholics hid it in a cave. For 800 years it went undiscovered. We walked by it on our walking tour; I went in later. I was impressed by both the exterior and interior.

The Tunnels of Guanajuato

A maze of tunnels lies underneath the city of Guanajuato. Originally built to prevent flooding, the first tunnels were excavated in the 19th century. Starting in the 1960s the city converted the tunnels into roadways and significantly expanded the network. Since most of the above-ground streets are too narrow to accommodate buses and other large vehicles, the tunnels carry much of this traffic. Many of them have walkways as well, and there are bus stops below ground. I would have enjoyed a walking tour underground.

There was much more to appreciate about Guanajuato than the pictures and descriptions above. It’s a colorful city and it exudes charm. I agree with a lot of other writers who have declared it one of the prettiest cities in the world.

Check out my photo album for a lot more.