I have not been looking forward to this trip with the level of enthusiasm that has always accompanied on my prior adventures.

There’s so much about this trip that should get my heart racing: seeing exotic birds and animals and exploring beautiful environments. Plus reconnecting with my friend Linda. I haven’t seen her for almost 25 years except for two short get-togethers when she visited Seattle.

But in the weeks leading up to this trip, I started having doubts about whether this would be a trip I’d enjoy. As someone who wilts in heat and humidity, I feared I would be miserable the entire time. Sweating buckets while slathered in bug spray and sunblock is not my idea of a good time.

I think there’s another reason, though. I’ve planned a lot of organized activities for the first week of my trip. And all of them are right smack down the middle of the tourist trail. I get picked up at the hotel, brought to various venues for the activity of the day, and then I get brought back to the hotel. Everything is preplanned, carefully packaged, and will ensure everything i see and do is just the way it’s supposed to be.

The thing is, I really don’t love traveling like this. I love serendipity. I love to wake up each morning and decide what I want to do today. I’m okay with having some things planned in advance, but this trip has virtually everything gift wrapped, so all I have to do is open the packages.

Well, but here I am, so maybe it will be okay. I can’t go back and unplan anything. In fact, I don’t really think it’s sensible to visit Costa Rica without planning all the excursions ahead of time.

Getting Here, Getting Settled

The trip was mostly uneventful. My flight from SeaTac to LAX arrived a few minutes early, and I had a 3 1/2 hour layover, so I had a late dinner and waited. Just before we were supposed to start boarding, they announced a delay. It turns out the first officer forgot his passport, so they had to get a backup pilot, and it took him almost an hour to get to the airport. How does a pilot forget his passport?

We only arrived at SJO about a half hour late, and I zipped right through passport control. There is an advantage to sitting near the front of the plane. When I got to the exit, I couldn’t find the driver who was supposed to pick me up, but he appeared out of nowhere, and soon we were off on the almost-three-hour drive to my hotel, La Pradera del Arenal. The drive went through a few towns and then climbed some mountains into fog. The switchbacks and traffic made it slow going; it’s only about 70 miles.

I had slept through breakfast on the plane, and I lost my bottle of water somewhere in the airport (I had it when I picked up my luggage at baggage claim, and then I didn’t have it when we got to the van.) I should have asked the driver to stop at a grocery in one of the towns we drove through, but I suffered in silence. He was a nice guy, but after pointing out some sugar cane and coffee farms, he ran out of things to tell me about the scenery.

The hotel is beautiful. Everything is open air: the reception area and restaurant open up to the pool. There are two jacuzzis, one under a roof. All the rooms have a view of Arenal, the volcano, but as you can see from the photo at the top of this post, it’s not always visible. I’m hoping it will emerge from clouds and fog long enough to allow me to get a good photo.

My room wasn’t ready when I arrived, so I sat out by the pool for a half hour. Finally, I got into my room and got settled in. After a shower, I went to the hotel restaurant for lunch.

I spent the rest of the day just lounging by the pool; the chairs are in the shade, and it wasn’t too terribly hot (78 very humid degrees). Later in the afternoon I had a couple of Costa Rica beers: Imperial and Pilsen. I kind of thought they tasted like light beer. I will have to seek out some local craft beers.

For dinner I walked down the road to a restaurant that was highly rated on Google, but I wasn’t bowled over. I had fajitas that in no way resembled the ones you’d get in a Mexican restaurant in the US. The meat was tough and chewy. And I had a coconut flan for dessert. That was the best thing I’ve eaten here so far, but I’m not optimistic that food here is going to be a highlight of the trip. 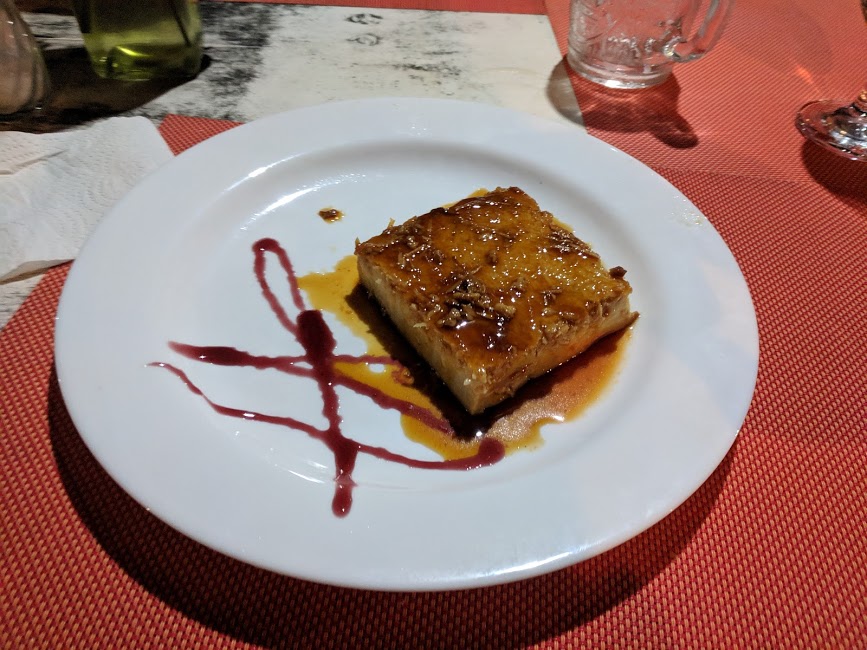 Tomorrow I have a free day. More sitting by the pool, for sure, and getting in the pool and jacuzzi for sure. Plus I’ll take a walk into the main town here, La Fortuna. It’s about a mile from the hotel.

Activities start on Tuesday. By then I should be ready and eager to start seeing the things that everyone raves about. Hopefully I will be raving about Costa Rica too in a few days.