The Old Town of Krakow used to be surrounded by a wall, and that wall used to be surrounded by a moat. In the early 19th century they tore down most of the wall and filled in the moat, creating what is today a lovely garden called Planty Park. On Friday afternoon, after my sobering visit to Auschwitz, a walk along the circumference of the Old Town was the perfect antidote. The weather was ideal, and it seemed much of Krakow was out enjoying the day. I walked around Wawel Castle, and took a detour along the Vistula River and across a bridge to take this photo. 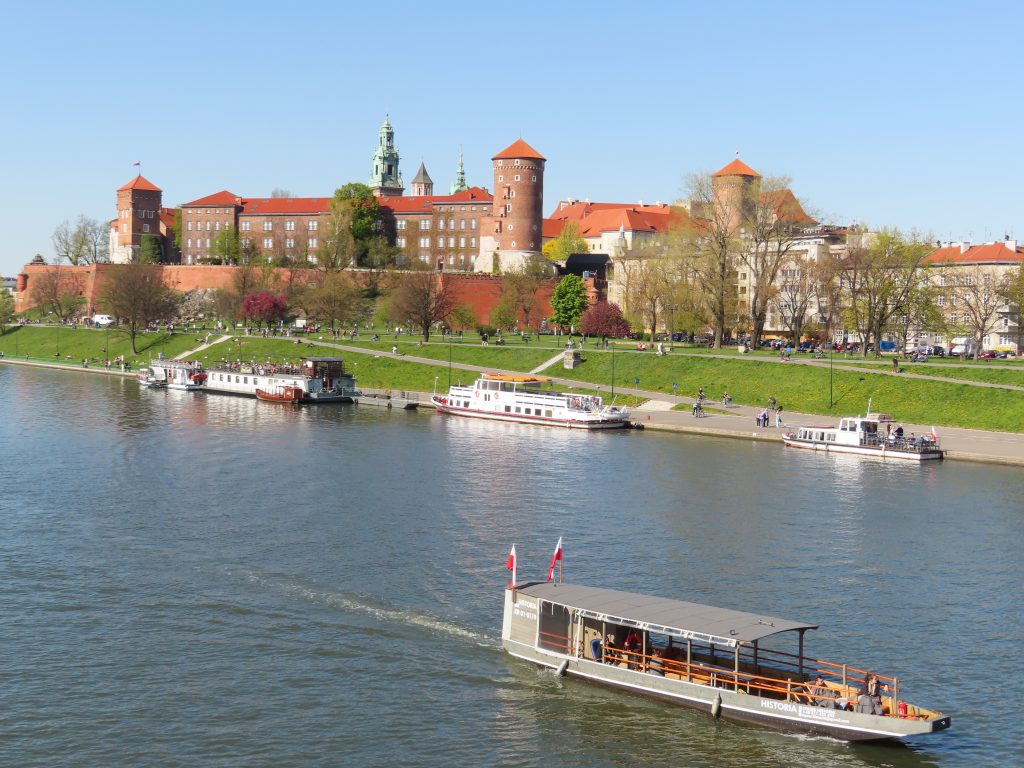 I will never get used to doors to shops and stores opening in. I am so accustomed to pulling the door to enter the store and pushing to exit, that I have at least once abandoned my effort to enter a store because I was convinced the door was locked, only to see someone a few seconds later pushing the door open. Then I was too abashed to go back. Maybe they thought I changed my mind.

Everything is closed for Easter, even my beloved breakfast restaurant, Charlotte, that is right next door to the hotel, and even Starbucks in the Market Square. I need to check out of my room by 11am, and my train to Wroclaw is at 14:19. I hope there’s something open for dinner tonight!

I did manage to find an Express (the local equivalent of 7‑Eleven) that was open, so I got some yogurt, and I’m sure there’ll be someplace at the train station where I can get a sandwich.

Update, 1:15 pm: I needn’t have worried. Everything that was closed early this morning (except Charlotte) opened later. The crowds of tourists enjoying Easter in Krakow are finding plenty of places to eat, drink, and shop. I eventually got my coffee at Starbucks.

I took another walk in the Planty Park, and there are lots of people around. What I didn’t see was any kind of Easter Parade. No one dressed in special Easter outfits, no Easter bonnets.

Yesterday I saw a lot of people walking around with baskets. I asked around and learned that they have special services at all the churches to bless the Easter food. So they bring eggs and bread and other stuff in baskets to church for the blessing, and that’s what they eat for Easter breakfast.

Yesterday I did a self-guided tour of the Old Town (following Rick Steves’ itinerary). Much of it duplicated the excellent walking tour I had on Thursday, but there are always some things Rick points out that are interesting.

I walked up to the Castle at the end of my tour. The Cathedral, which is within the castle grounds, is, according to Rick, open for free most of the time, though there are some areas that are only accessible with a paid ticket. The ticket desk was closed, though, and a guard stood at the entrance to the cathedral next to a sign indicating that entry today was limited to prayer and liturgical services.

So I walked up to him and asked if I could enter for contemplation, and he said yes. I couldn’t bring myself to say I was going in to pray.

There were a lot of other people in the cathedral “contemplating” the decor and architecture.

They love their local son here.

Friday night was the first night of Passover. I had connected with the Jewish Community Center and was invited to attend their Seder.

They actually had four separate Seders. Upstairs were the seniors, including, I was told, some Holocaust survivors. In another room was the Seder for college students. Earlier in the afternoon they’d held a children’s Seder. And I was in the Seder that was for whoever didn’t fall into the other three categories. There were some locals, but mostly it seemed to be travelers.

The community’s rabbi, who led the Seder, is Orthodox, but the community is very reform and so was the Seder. There were about 40 attendees. Before it began, the rabbi came around to every table and introduced himself and greeted each of us individually. He is from Great Neck, New York, about a half-hour from where I grew up. At my table were a local woman, a girl from California on her gap year before starting college, a New Yorker currently living in Stockholm, and a native Swede also living in Stockholm. We had a lot of fun getting to know each other. 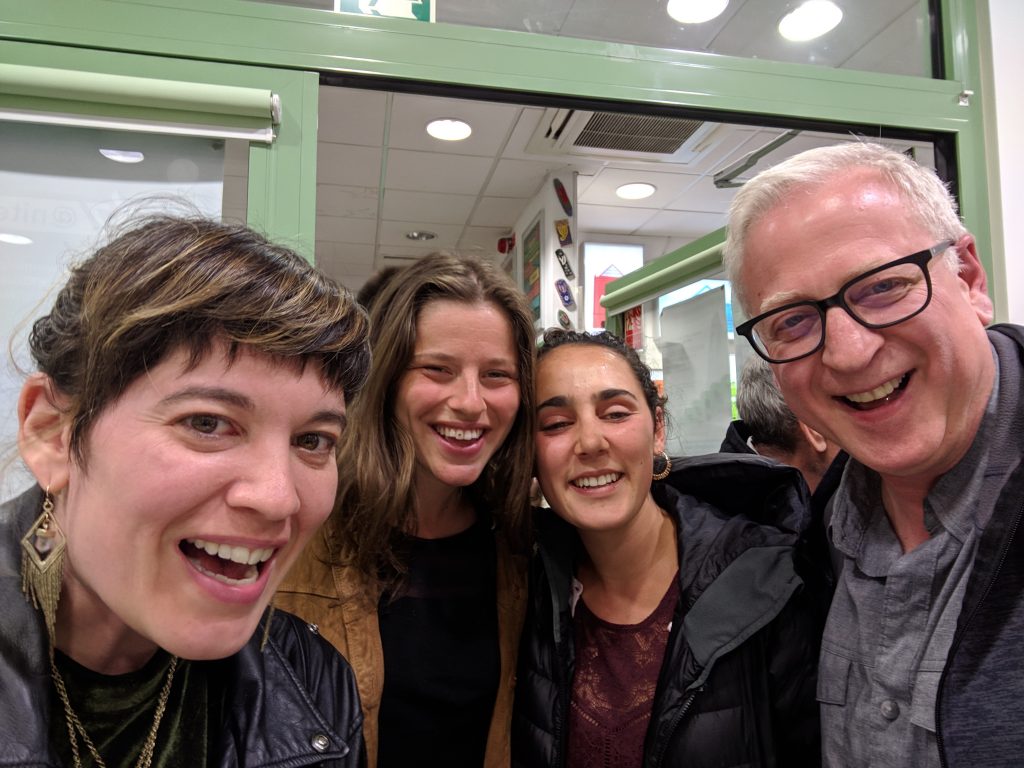 At first it seemed the Seder would go on forever. It was over an hour before we got to the Four Questions, at which point three older women tourists got up and made their apologies and left. After that, the rabbi sped things up a bit.

The dinner was prepared and served by local volunteers. It was not great, but decent.

And some questions I didn’t know:

I won a very pretty challah cover for getting the most beads.

The movie Schindler’s List was set in Krakow and was filmed here. 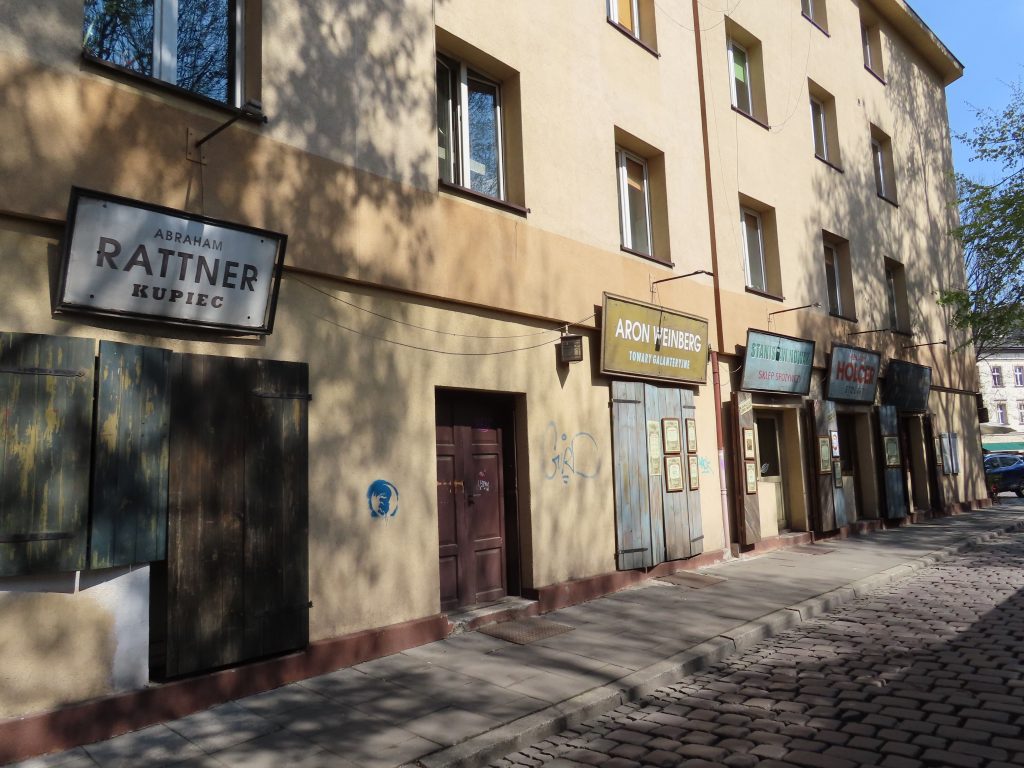 Of this street, Rick Steves writes in his guidebook:

… notice the side street with a row of rustic old Jewish shop fronts, which evoke the bustle of prewar Kazimierz. The Jewish names-Rattner, Weinberg, Nowak, HolcerY—stand testament to the lively soul of this neighborhood in its heyday.

This all may be true, but on my walking tour Thursday morning, my guide said that this street was dressed up by Spielberg for the movie, and the restaurant that’s there today decided to keep it.

Kazimierz is the old Jewish district, going back to the end of fifteenth century, when the Jews were scapegoated for a fire in the Old Town and forced to live there. At the time, it was a separate city. In the centuries since then, until the Nazis entered Krakow on September 6, 1939, Jews were generally accepted as full-fledged members of the community.

When the Nazis arrived they immediately sent most of Krakow’s roughly 70,000 Jews to Lublin. The remaining 15,000 were sent to the ghetto at Podgórze, just south of the Vistula River. Yesterday, I had a tour there. The central square (called Ghetto Square) has a monument consisting of rows of empty chairs. 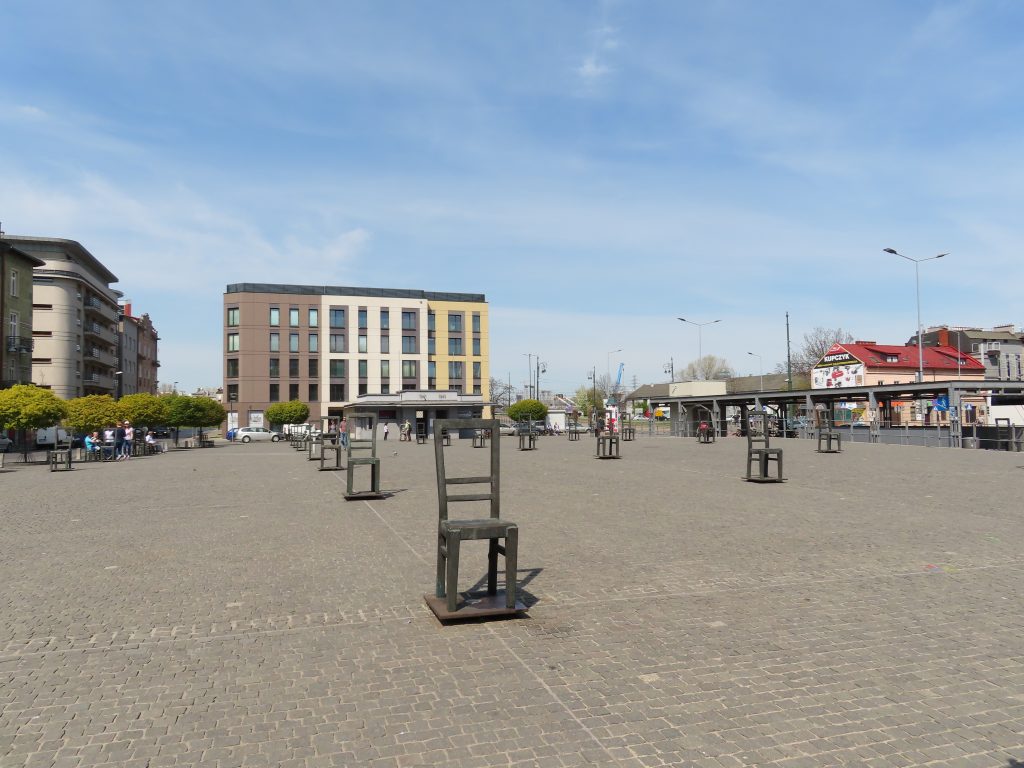 It was a very evocative memorial, so it was kind of disturbing to see some tourists sitting in the chairs and blithely posing for photos.

From the square my guide took me to the Oskar Schindler’s Factory Museum. Although this is located in the factory’s administration building, it provides a broad perspective on the experience of Krakow during the Nazi occupation. It was good to go through with a guide to help cover the highlights.

The museum was very crowded. As it was the day before Easter, they were closing early. Fortunately, my guide had timed tickets, so we were able to enter. A lot of people were disappointed. And at the end of our tour, there were a few people who were sold timed tickets for late afternoon even though the museum was closing early, and they were very upset and were making a scene, trying to force their way in.

The Old Town (Stare Miasto in Polish) is a grid of narrow streets lined with charming old buildings. Little of it was destroyed in World War II, although there are a handful of newer buildings intermixed.

In the middle of it all is the Market Square, Europe’s largest square.

Though there are a lot of souvenir shops, ice cream shops, restaurants, and cafes, Krakow feels real. I’ve loved my time here.

But I’m ready to move on. Next stop: Wroclaw.