It’s Sunday, April 14. I’m currently on a train from Berlin to Warsaw. We just departed, and the journey will be over six hours, so I have plenty of time to make up for not blogging durring most of my five-and-a-half days in Berlin. I kept thinking I would find time to blog, but then gave up trying and just decided to wait and do it on this long train ride.

Rather than a minute-by-minute recap, I’m going to share my main impressions of Berlin and the highlights of my time there.

I have so many mixed emotions about Berlin, and it’s hard to decide how to describe my visit. I can start by talking about how, after ten gorgeous days in Prague and Dresden, with lots of sun and temps rising each day into the upper 60s, it turned cold and gloomy shortly after I arrived. We even had a few brief, light snow flurries. It didn’t rain, though, at least not until this morning’s cold drizzle.

The weather seemed to match the feel of the city. It’s not a warm place filled with warm, friendly people. It’s a major urban environment. There are certainly some beautiful sights, spectacular architecture, both classic and modern, and charming neighborhoods. But mostly Berlin is a city for people who live there. And like most big cities where people live and work, Berliners seem to love their city but also just tolerate it. They wait on crowded subway platforms to ride on crowded trains. They wait in long lines to pay for groceries or to buy a cup of coffee. They have places to go and things to do, and they don’t have enormous patience for or interest in tourists who don’t know how to order a croissant and a cup of coffee at a cafe, or who stick their credit card backwards into the card reader. (Guilty!)

Berlin has some excellent restaurants and some charming neighborhood eateries. I had some good meals, but I also enjoyed taking a few nights off. Since I was staying in an apartment, and there was a supermarket just a block away, I enjoyed deciphering food labels and seeing how things tasted. (I didn’t get too adventurous, and it all worked out okay.) I did more breakfasts and lunches out and not so many dinners. Berlin has more than its share of bakery/cafe type places with vast arrays of gorgeous breads, pre-made sandwiches, and pastries that look and taste amazing. And there are tons of ethnic restaurants, but I didn’t try any.

They also have some excellent chocolate. On one of my walking tours we stopped in to the Rausch Chocolate House, which has, among many amazing chocolate products, models of various Berlin monuments (such as the Brandenburg Gate above).

If I could go back and replan my time in Berlin, I’d schedule more different walking tours. As it was, I had four, which probably sounds like a lot, but because Berlin is so big and so spread out, and because there is so much history more walking tours would have been a helpful way to learn and explore efficiently.

My next walking tour wasn’t in Berlin at all. We took a train to Potsdam and did a tour of that city, which is the capital of the German state of Brandenburg. There we visited the Bridge of Spies (which really just looks like any other small iron bridge). We also visited Cecilienhof, the palace where the Potsdam Conference took place and Truman, Stalin, and Churchill decided on the partitioning of Germany. We walked through the charming old town. And we visited Sans Souci, Frederick the Great’s French Baroque-style palace. (We didn’t go inside either palace; we just saw them from the outside.) I enjoyed this tour because it was strong on history. And Potsdam is very pleasant. There was a lot of walking through parks. But it was very cold.

My last walking tour was Jewish Berlin. It was interesting, but it didn’t actually cover a lot of sites. We got a lot of history on this tour, too, so I liked it. He talked about Jews in Berlin in the middle ages, through the nineteenth and early twentieth centuries, the Nazi era, the Communist era, and up to the present day. There were seven of us on the tour, mostly all Jews from what I could tell, and of course when you have a group of seven Jews, you get about fourteen opinions. Unfortunately, some of the other people on the tour thought what they had to say was more interesting than what our guide was saying.

On this tour I did learn about an event I was not familiar with. Originally, the Nazi’s held off on deporting Jewish men who were married to Aryan women. But in February 1943 the Gestapo rounded up about 2,000 of these men and held them in a detention center in Rosenstrasse. Here’s how the events are described at timeline.com.

In short order, word spread among the “mixed” families that their relatives were being held at the Rosenstrasse center. Inside, the men had very little food and inadequate sanitary facilities. Slowly, a crowd amassed, mostly of wives and mothers hoping to learn more about who was inside. Frustrated by the lack of information, they stayed day after day in the freezing temperatures. They chanted, “Give us our husbands back.”

February crept into March. The crowds grew to 150 and then 200 people, some reports say into the thousands. Word spread about the group, first across the city, then to international press. It was an unprecedented demonstration by German citizens against Jewish incarceration. The protesters occasionally yelled but sometimes stayed silent, watching. When officers and trucks with machine guns threatened lethal force, the women stayed and faced them.

“Without warning, the guards began setting up machine guns,” said Charlotte Israel, one of the protesters, in 1990. “Then they directed them at the crowd and shouted: ‘If you don’t go now, we’ll shoot.’ The movement surged backward. But then, for the first time, we really hollered. Now we couldn’t care less…Now they’re going to shoot in any case, so now we’ll yell too, we thought. We yelled, ‘Murderer, murderer, murderer, murderer…’”

The Nazi Minister of Propaganda Joseph Goebbels knew a massacre of hundreds of German women in the middle of Berlin wouldn’t look good. And it would further depress military morale after recent defeats on the battlefield — half a million soldiers had died in the Battle of Stalingrad by time the Nazis surrendered on February 3. Goebbels ordered the release of the intermarried Jews at Rosenstrasse.

A monument to the women who protested at Rosenstrasse stands nearby. 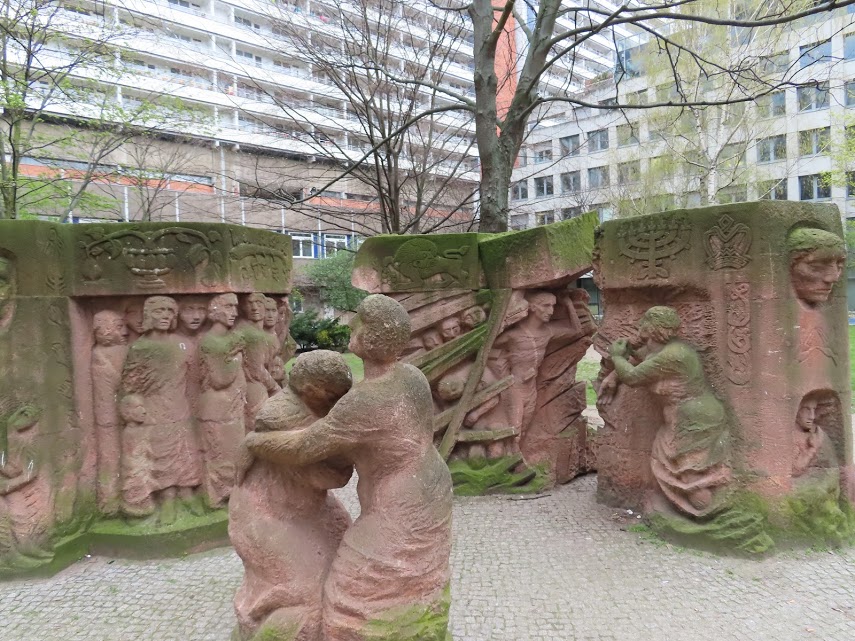 Germany has a dark past, not just recently, but going back hundreds of years. Their great leaders were not always the most noble of people. But most especially, they are responsible for some of the most reprehensible acts in the history of the world.

What I found especially remarkable is that the German people I met (tour guides mostly) and all the museums and memorials I visited that dealt with aspects of Germany’s dark history do not mince words in expressing shame and taking ownership of what their past leaders did. It was refreshing to hear people talking about Hitler and the Nazis and the Stasi and not making excuses or downplaying or shying away from the topic. There are memorials to the Jews, the Roma people, the gays, the people who tried to escape from the East. There are museums that deal with all of the dark periods in German history openly and honestly. I didn’t get to all of them, or even very many, but I felt, as I read displays and looked at photos and monuments, that we in the USA could learn from the Germans when it comes to accepting responsibility and expressing regret for our treatment of native Americans, African slaves, and minorities.

Not all of this visit to Berlin was about confronting history. I managed to experience some great culture as well.

I was hoping to see the Berlin Philharmonic, but they were away on tour, so I managed to see a recital by Russian pianist Grigory Sokolov at the Philharmonie. It was a beautiful concert hall, and he played well. And he played six encores. I would have been happy with one or two.

I also went to the Deutsche Oper and saw Der Zwerg by Zemlinsky. This is a strange opera made even more so by the odd staging. It was performed superbly, but I really didn’t understand a lot of what I was seeing.

The museum that disappointed me was the Pergamon Museum. Perhaps this was because the showpiece of the museum, its namesake, the Pergamon Altar, is being restored and is not on display. (They originally thought the restoration would be done this year; they now say not until 2025.) There is a lot more to see there, including two large reconstructions of ancient gates, but there were a lot of artifacts, and to be honest, looking at old stuff isn’t very interesting to me unless it has artistic merit. Shards of pottery, old weapons, kitchen utensils, and such is boring for me.

More enjoyable for me were two of the art museums I visited, the Alte Nationalgalerie, with work primarily from the nineteenth century, and the Gemäldegalerie with work from the middle ages and Renaissance. In fact, I spent four hours at the Gemäldegalerie and had to rush through at the end in order to catch this train.

There’s so much more I could say about Berlin. I saw much more and it has left an indelible impression on me. This is a city I wouldn’t want to visit again as a tourist, but I would definitely consider it a place to come and live for a few months or a year. Maybe someday…