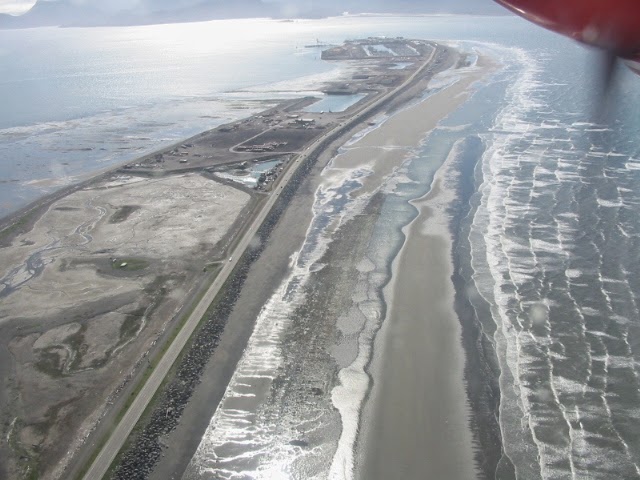 I gave up on waiting for sunset last night and was asleep by around 11:00. Full 8 hours of sleep — felt great!

After a quick walk up to the old Russian Orthodox Church (which I somehow overlooked in my wanderings yesterday), I came back for breakfast at The Buzz. Baked french toast that was yummy, with fruit and cheese baked into the bread. It reminded me of Grandma Rose’s Lokshen Kugel. It’s cool and breezy this morning, but not enough to keep me from sitting outside. 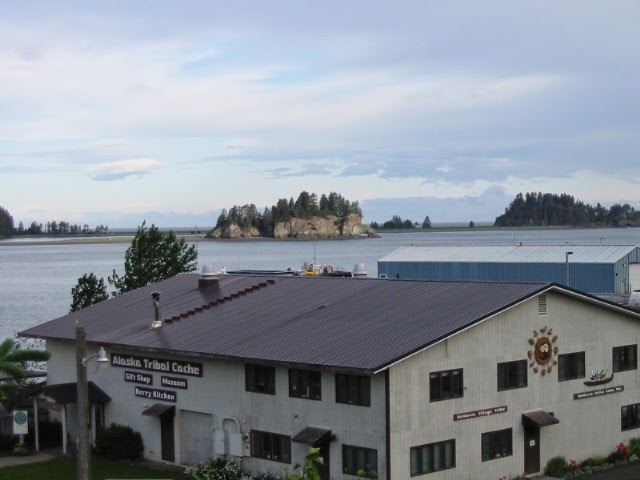 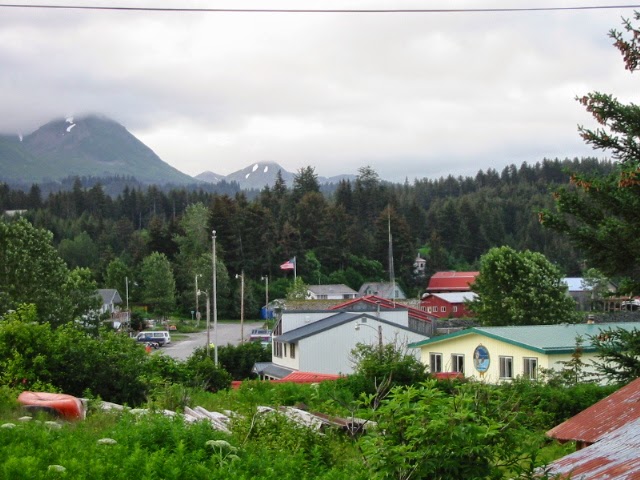 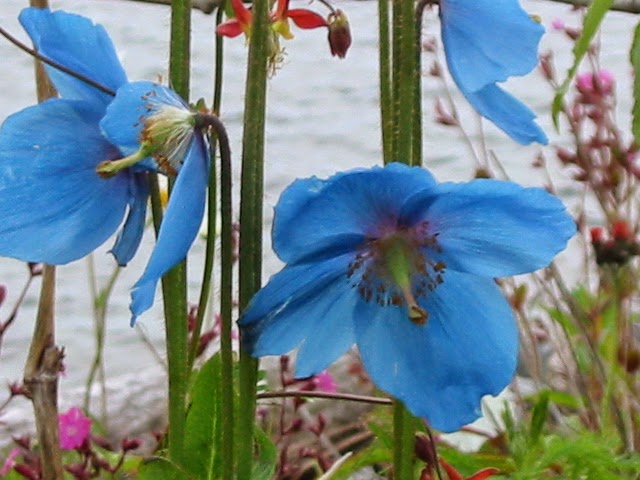 I was talking with Andrew earlier this morning about the economic condition of this town, and he gave me an interesting perspective. Having traveled in Alaska more than I have, he said that this is how a lot of places are, and how Alaskans choose to live. Pretty houses or nice cars aren’t necessary or even desirable, and with limited good weather, they’re more interested in using the opportunity to keep things functioning rather than making them nice. If a car dies, it’s easier to just let it sit and rust.

In about an hour we fly back to Homer. I’m excited!

What a difference from yesterday to today! I’m on Homer Spit, under a bright sunny sky. A cool, strong ocean wind is blowing.

On the walk to the airport in Seldovia, we crossed the bridge over Seldovia Slough, and the locals were out going after salmon again, but this time they made a few catches. 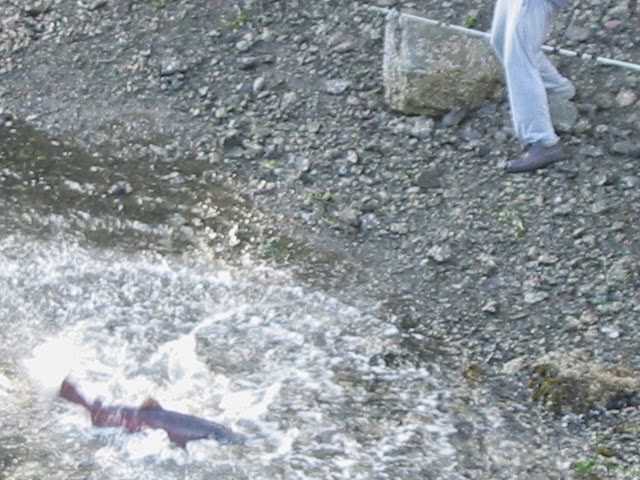 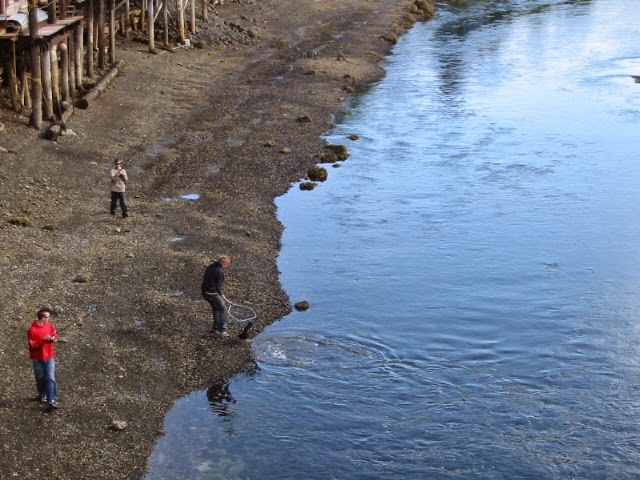 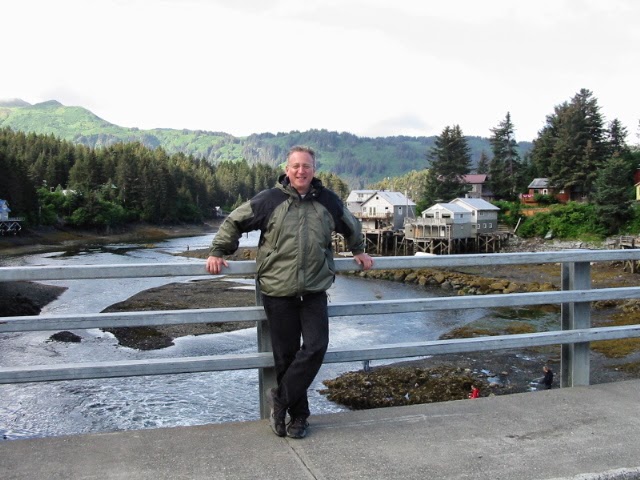 The plane ride was short but a real treat for me. It was a twin engine plane, seating all 7 of us plus the pilot, who seemed barely 18 years old. The airport in Seldovia was a source of much humor for us, so small and completely lacking in amenities or security. The restroom was an outhouse! Baggage sat unattended in a wheelbarrow and there was no security of any kind. There was a small whiteboard in the building on which I wrote: 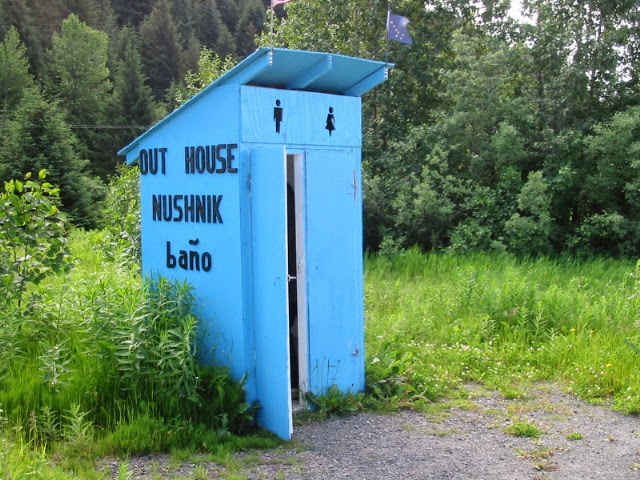 When we got in the plane and the pilot closed the hatch, I saw that there was a gap in the gasket. I said to the pilot, “Must be hard to pressurize the cabin with a gap like that.” He laughed. The I asked him if he’d point out sights on the way back to Homer, and he said, “It’s just water.” 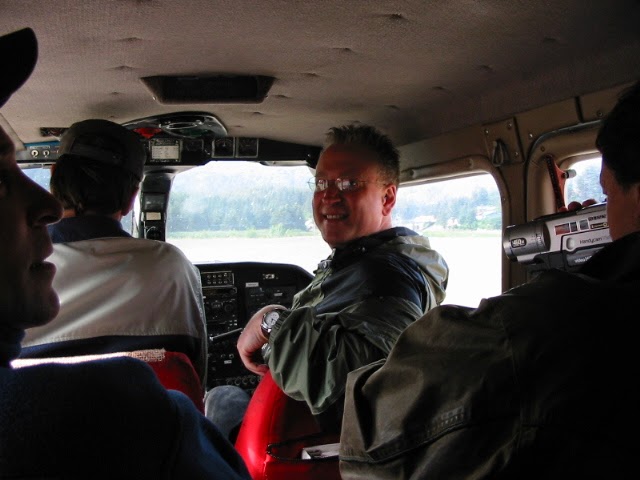 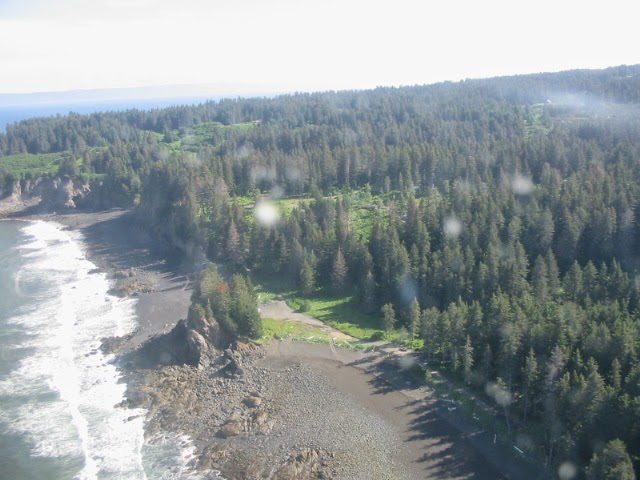 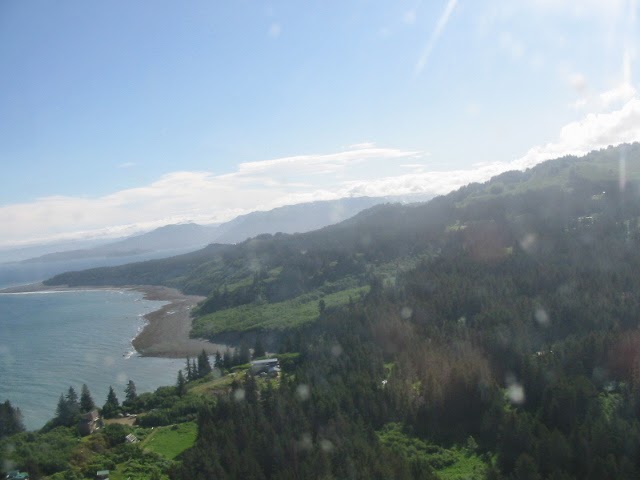 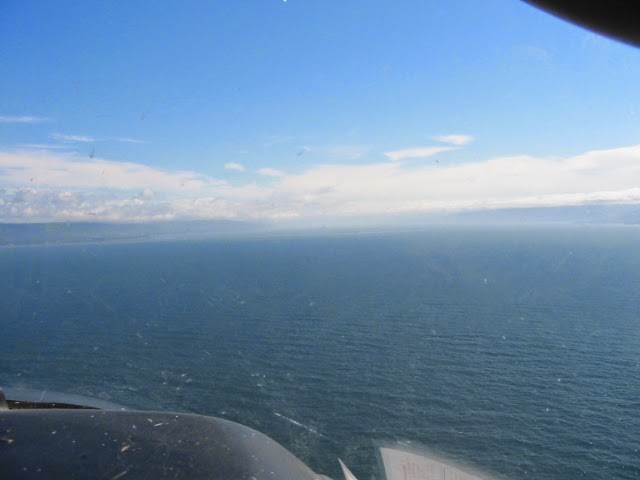 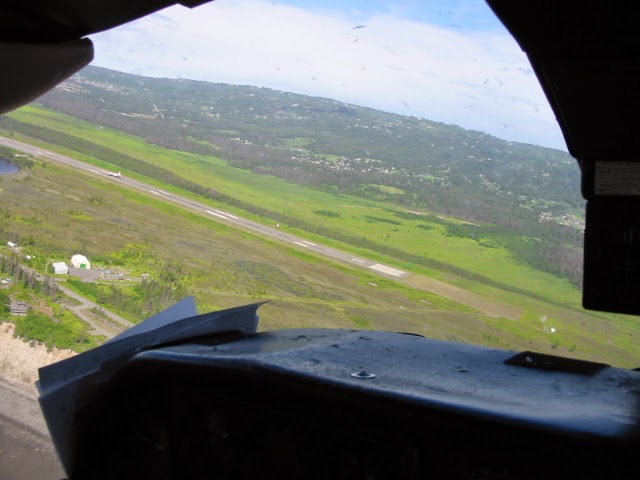 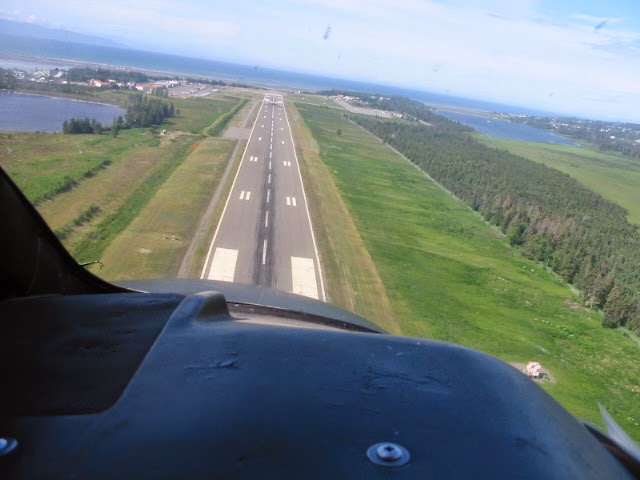 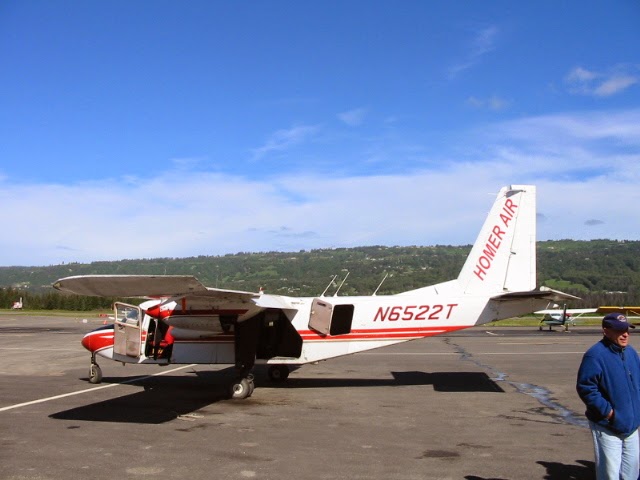 After we got to Homer, I ducked into the Salty Dawg, where people sign and post dollar bills all over the walls and ceiling, and wandered onto the beach. There’s a seafarer’s memorial here with plaques in memory of fishers and pilots lost at sea. 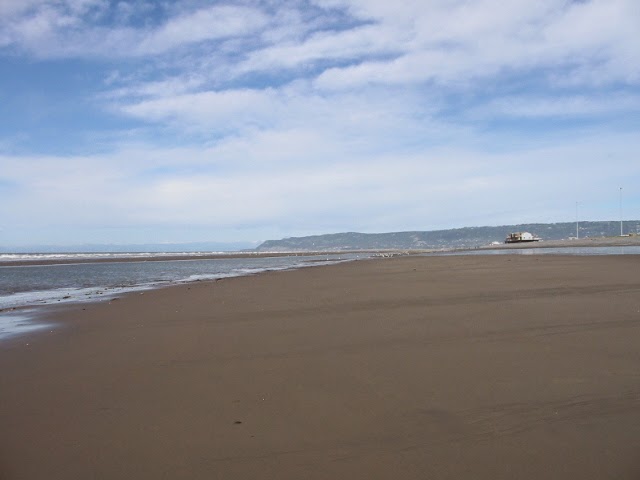 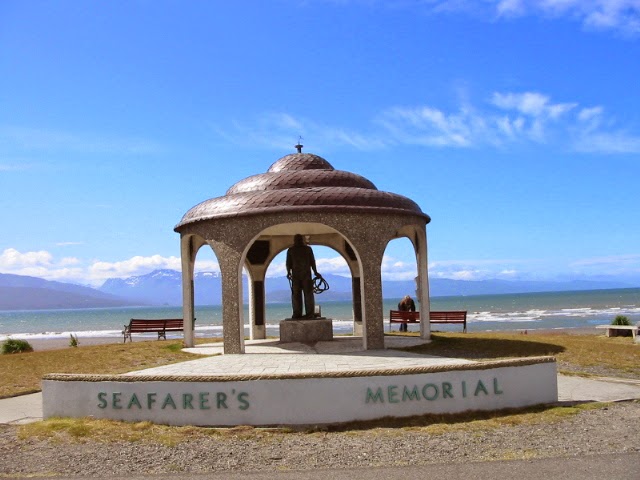 Homer is behind us now. I’m in the van; we’re heading north on Sterling Highway (Alaska Route 1). The views of the three volcanoes (Augustine, Iliamna, and Redoubt) that were shrouded on the trip down are stunning today.

Lunch on the Homer Spit was at an Argentine/American restaurant called Las Pampas. I had halibut chowder and a salad with grilled halibut, and for dessert the chef made us creme caramel (flan, or whatever the Spanish word is). All yummy! 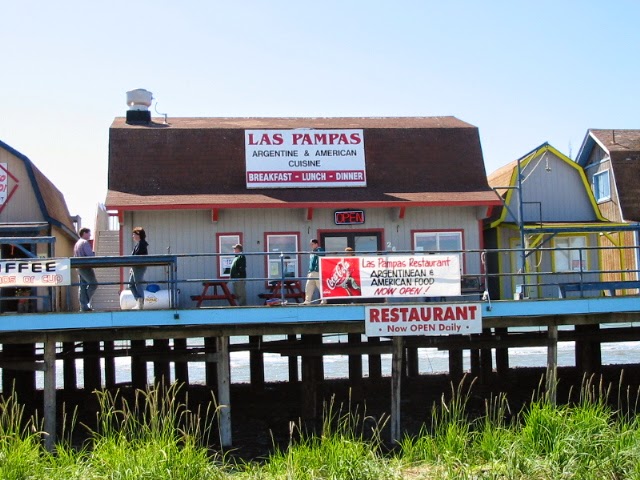 Then Patrick drove us to two spots for views. 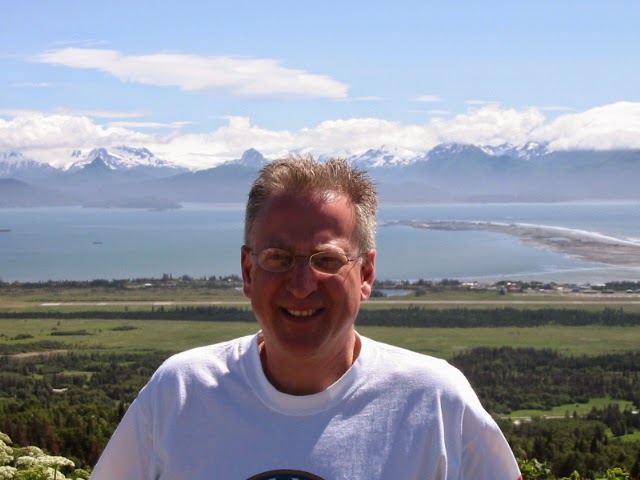 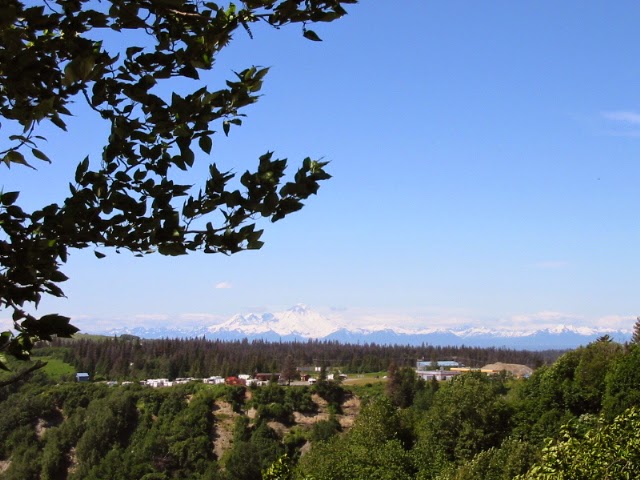 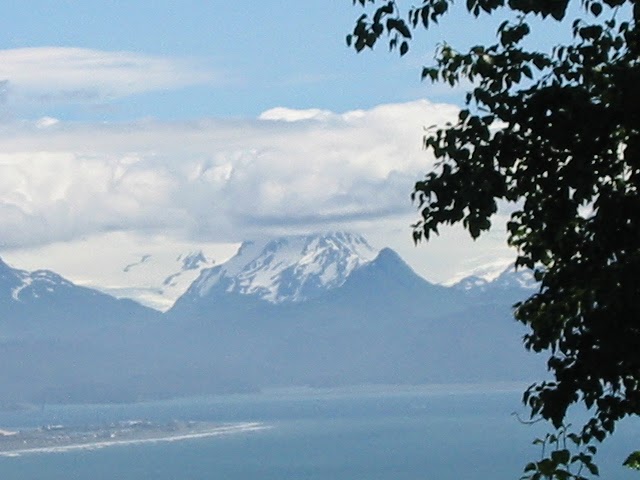 I was chatting with a kid who was sunbathing out in front of Las Pampas. He goes to school in Montana and usually works commercial fishing boats in the summer, but he’s taking this summer off and bumming around. He was saying that fishing has taken a serious downturn lately. He said stocks get depleted and fish move to other feeding areas and it’s a cyclical industry. Tourism is down as well, but nevertheless, Homer is still growing quickly.

We just stopped at Fred Meyer in Soldotna. Pretty much like every other Fred Meyer I’ve been in except more hunting and fishing stuff. Earlier we pulled off the road to see a small Russian Orthodox Church. 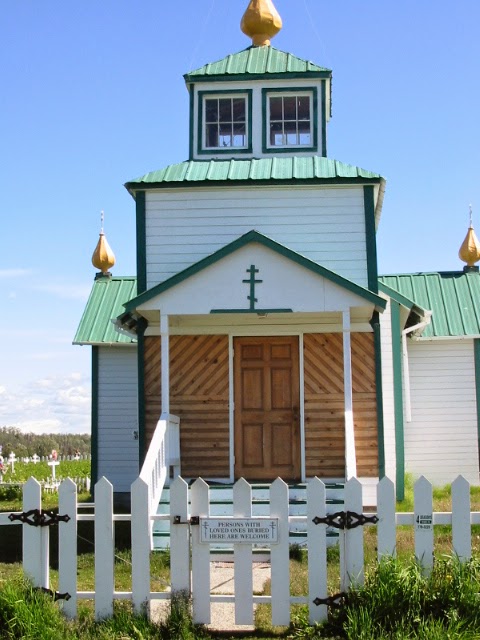 We also had our second moose sighting just before we reached Soldotna. 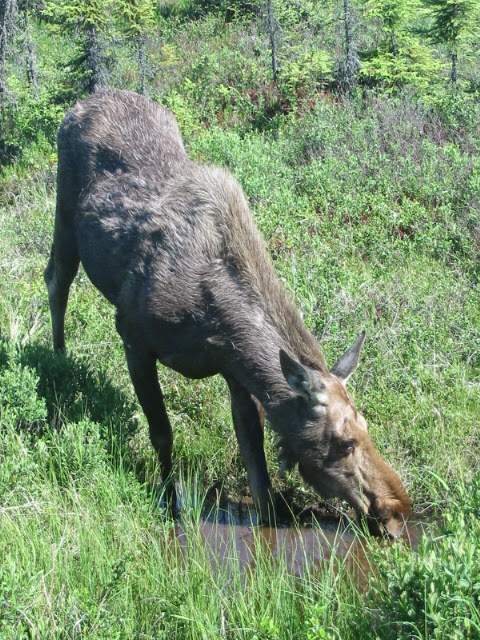 The sky is still bright blue, with a few puffy clouds here and there. I sure hope it says this way through the weekend. 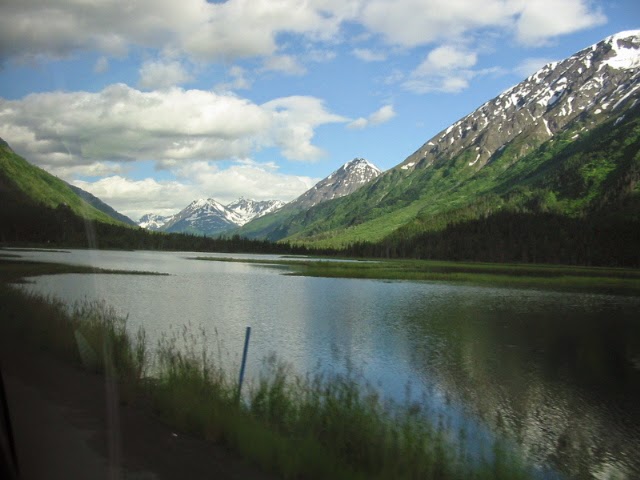 We got back to Hope, where Barb was waiting for us. She took our barbecue orders and I went with a turkey burger. Shortly, Todd came by with Liam, their son. How interesting it was to arrive back at the cabins and feel like I was arriving home! Joyce said the same thing as I was thinking it, even thought we’d only ever been here once before, two nights ago. 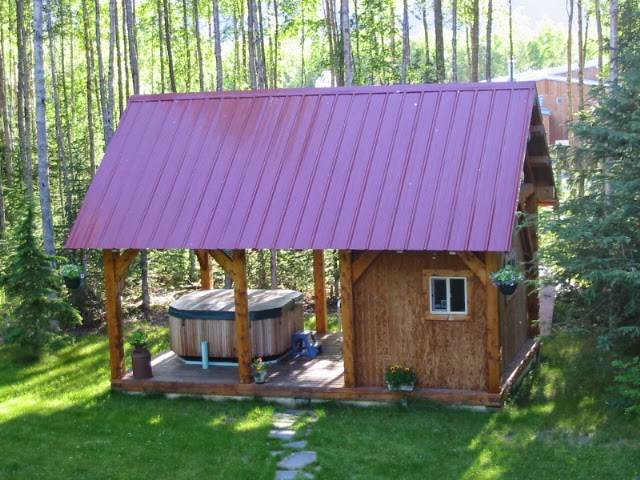 After dinner we walked up to the Seaview Cafe for a beer and listened to some live music (a couple of guys with guitars singing), then came back here and I took a thoroughly refreshing soak in the hot tub. Now I’m waiting for my swim suit to dry in the dryer before bed. What a great day it’s been!