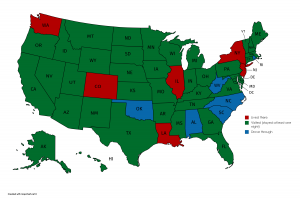 I grew up on Long Island, and the only other state I went to until I was ten was New Jersey, where my aunt and uncle lived. The few family vacation we took were car trips to upstate New York. Place names I remember: Hunter Mountain, Whiteface Mountain, Howe Caverns, the Catskill Game Farm, North Pole, Ausable Chasm.

In 1966, the summer I was ten, we went to a new state: Pennsylvania. We visited Gettysburg, Amish Country, and Hershey.

Somehow I was becoming aware of the idea of going somewhere I’d never been before. As that happened, I came to wish I could go to other places. Later my family took a vacation in New England, and I added Massachusetts and Connecticut, plus my dad made a wrong turn (possibly on purpose, though I will never know) and we ended up crossing the state line into Rhode Island. On that trip we visited Sturbridge Village and Mystic Seaport.

My first time on an airplane was in 1974, when I came home from college in Syracuse for the weekend on an American Airlines jet to Kennedy Airport.

My next opportunity to add states was in my sophomore year in college. I and two high school friends drove to Florida during winter break. We spent a few days in Fort Lauderdale before heading to Disney World for New Year’s Eve 1975. On that trip I added Delaware, Maryland, Virginia, North Carolina, South Carolina, and Georgia to my list of visited states.

I’m not sure when I set the goal of visiting all fifty states, but gradually I found my way to more and more of them. In my early twenties I took a bus trip across the country to visit my sister in southern California. I didn’t love bus travel, but I was really just as interested in visiting the many states in between. I went with a friend on a trip to Montreal and Quebec City, during which we drove through Vermont and New Hampshire.

Later I moved to New Orleans, then Boulder, then central Illinois.While teaching in Illinois, I had my first opportunities to do choir tours to some additional states. I also made my first visit to Washington, DC, and to Niagara Falls, where we crossed to the Canadian side and the province of Ontario. My first three trips to Europe were on choir tours during that time. And I went on a six-week car trip with a friend that took me through a number of new states and Canadian provinces.

In 1997 I decided to make my first solo trip to Europe: a long weekend in Paris. Then I invited a friend to go with me, so it turned out not to be a solo trip.

I have also expanded my European travel, recently completing my third solo trip to Europe. In 2009 I spent two weeks in Italy, visiting Siena, Florence, Lucca, and the Cinque Terre. And in May and June of 2012 I went to Denmark, Sweden, Estonia, Finland, and Iceland.

By my best count, I’ve landed at and taken off from 43 different airports in the USA plus 13 in Europe. Some of those were merely layovers, but I still think that’s a decent number, considering what a late start I got.

But clearly, I’m not a great world traveler. I have a limited number of stories to share about my own travels, and it would be beyond arrogant to suggest that I have enough experience to make me an expert whose advice should be followed by other travelers.

Plus, there are so many sources for travel advice on the web. My last two vacations were planned and booked almost entirely at my computer. The last thing I would have needed (and the last thing anyone else needs) is more information to help with deciding on an itinerary, buying tickets, reserving lodging, or arranging tours.  I got plenty of advice, both sought after and unsolicited. I won’t dispense any of my own on this blog.

There are also plenty of travel blogs out there that describe trips taken by other travelers. I have a few of my own. As a test, I picked some of the most unlikely destinations I could think of. I found travel blogs describing trips in Sudan, Eritrea, North Korea, Syria, and Somalia. There are some fascinating stories worth reading about trips to exotic places I will probably never get to. And even if I never go anywhere that hasn’t been written about ad nauseum, I will certainly create blogs describing my future travels. But this isn’t that.

So what is this? I am hoping this will be a way to be on vacation in my imagination, even when I’m physically in my regular world. And I hope it will be a way for readers to come along with me. 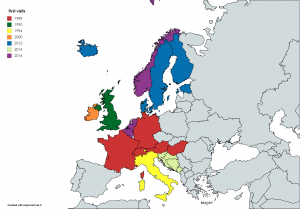 I wrote the above a few weeks after returning from my second major independent European trip. For those two trips I had created small blogs, more like online travel journals. Then I decided to pull all my trip journals together into one blog to chronicle all my travels. I built that blog using Blogger. This was the first post in that new blog. It was called “Why is this blog different from all other travel blogs?”

Since then I have been to Europe two more times. I’m up to 45 US airports and 18 in Europe. And this fall I’ll be heading to South America for the first time.

I’m now in the process of migrating my blog to WordPress and to my own domain. I have come to realize that I don’t merely want to share photos and accounts of my daily travel activities with my friends and family. I want to make this something more.

My mission has not changed. I still hope this will be a way to be on vacation in my imagination when I’m not actually traveling.

But I have learned some stuff. And I want to put that out there.

Some of what I’ve learned is personal. I am a private person, even in this era of what seems like endless and limitless sharing through social media. But I have come to realize that I want to share at least some of what I have kept private in order to make my stories more compelling and my lessons more universal.

I’ve also learned some things that I hope others can benefit from. In 2012 I said I won’t dispense advice on this blog. And that is still not its main purpose. But if I can offer tips and help others avoid mistakes I made, I’m willing to wear the shoes of an expert from time to time.

I realize that I’m risking making this blog not so different from all other travel blogs. I guess I will learn to be okay with that.